Coma, Patronelli, Al-Attiyah and Chagin are the Kings of 2011’s Dakar 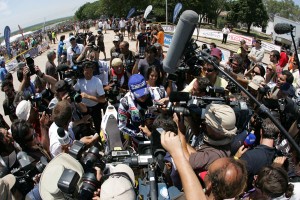 On this last special stage of the Personal Dakar Argentina Chile, Marc Coma reached his third Dakar victory by keeping Cyril Despres under control. The easy route turned into a nightmare for “Chaleco” who lost a third place on the podium and in the standings to Helder Rodrigues due to mechanical breakdowns. In the car category, Nasser Al Attiyah gets his very first final victory in a Dakar way ahead of Giniel De Villiers. As for Vladimir Chagin, he wins his seventh Dakar and finishes the raid ahead of three of his Kamaz team mates.

Avoid trembling was the motto of the day. En route to Santiago de Baradero, Marc Coma started with more than 16′ lead in the general standings on his long-term contender Cyril Despres. The risk of seeing this lead go to waste for title holder was almost nil for the title holder, so the big challenge of this special stage was to stay focused. On the long straight stretches of trail, the Catalan who was opening the road went in clean and fast. Despres could only follow and was never able to catch up with the expected winner. The leader of the general standings since stage 4 only had to keep his opponent under control and only lost 1’30 to Despres on the finish line of the stage. The total time gap between the two men in the standings is 15’04”; finishing second, Despres will have a hard time coming to terms with the 10′ lost for a silly penalty. As for Coma, he can claim “paternity” of the perfect race: his riding craft brings him a third Dakar victory, the same number of final victories as Despres.

The third place on the podium seemed to be promised to Chilean rider Francisco Lopez, who had also finished third last year. With a 43-minute lead on his closest pursuant it was a sure deal. Unfortunately, fate hit hard on “Chaleco” who broke the rear shock absorber of his bike on km 159, i.e. just 22 km shy of the end. On the finish line, Helder Rodrigues, who just made the second fastest time of the special stage, just 5” behind Verhoeven is counting the minutes. Despite the help of Alain Duclos, who is now towing his leader, “Chaleco” only crossed the finish line at 13:23. Much too late – actually 29 minutes too late – to save his third place now occupied by the Portuguese rider. After Aprilia in 2010, it is therefore a Yamaha bike that finishes right behind the two lead KTM bikes. For Rodrigues, who finished 4th last year, it is a dream come true.

The podium of the quad category was also significantly changed, not at the top as Alejandro Patronelli also intelligently managed the race to be able to follow his baby brother Marcos as this year’s Dakar winner. But in third place, right behind Sebastian Halpern, Christophe Declerck only had a 3-minute lead over Lukasz Laskawiec. The Polish rider managed to make great use of the performance of his powerful Yamaha and win the stage, hence ousting Christophe Declerck from the podium for 52”! 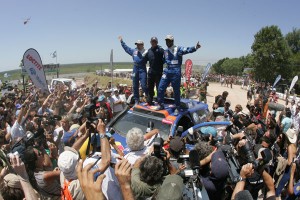 Suspense was not on the agenda in the car race and battle. Small but repeated mistakes had already relegated Carlos Sainz further away from first place in the standings in the past few days. Hence, Nasser Al Attiyah became a better and better Dakar leader. With a 48-minute lead on Giniel De Villiers, who proved to be the steadiest of his team mates and opponent, the Qatari driver did nevertheless start with fear gripping his insides. Focused and steady, the Qatari driver wins his first Dakar after missing this victory by a very short 2 minutes in 2010. After the game of musical chair that took place for most of the two weeks, Carlos Sainz finishes third and gives a triple victory to the Race Touareg. In the process, the Spaniard also wins his 7th stage in the 2011 Dakar. This brings him to an impressive total of 24 stage victories in the Dakar; one more than Stéphane Peterhansel in his Dakar career.

The Frenchman, leader of the X-Raid team, mainly regrets losing his chances of getting to a 10th Dakar victory so early on! Finishing fourth today, “Peter” never managed to leave his fourth place in the overall standings. Fourth was also his place at the end of the 2010 Dakar. Then, further down the standings, way behind, Krzysztof Holowczyc, finishes fifth behind the wheel of a BMW X3 as well, but some 4h10 behind Nasser Al Attiyah. 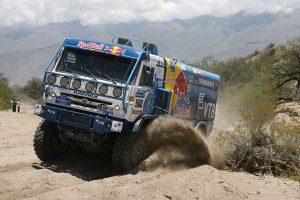 In the truck category, Vladimir Chagin had – a few days ago already – left behind his main contenders and team mates. At the end, the Czar wins his seventh Dakar, a record in this category. The 100% Kamaz podium brings together Chagin, Firdaus Kabirov and Eduard Nikolaev. The 26-year old “Tsarevitch” – as he is called by the Russian squad – reaches the podium for his first participation in a Dakar behind the wheel of a truck. And the parade of the blue truck goes on further down the rankings as the fourth place in the general standings is held by Ilgizar Mardeev.

Nasser Al Attiyah : « We did it ! »
“We did it. I am so happy! We drove a good, clean stage. I was just thinking about the finish line. It means a lot to win a Dakar, for me, for my people, for my country and for my team. It is a great victory. It’s hard to explain everything that goes through your head. But it is a very nice feeling. We demonstrated that we have the strongest team in the world. It is the third time the team has won a Dakar. It is also the biggest moment in my career. I think that now people will finally know where Qatar is located.”

Alejandro Patronelli: “I had not won anything since 2000”
“Tough. Real tough. If we analyze what happened, it’s incredible. We had lost our momentum, Marcos had fallen. We should not be here actually. Getting back in the race, losing hope again, finding it back, losing it yet again when I broke my hand and I was unable to accelerate. There were still some 400 km left in that stage and still 7 or 8 to go, with a damaged hand. This is when I thought: “if my hand can stand the 400 km, the rest will be able to hold on for the remaining 5,000 km”. And here I am, Champion with one-and-a-half hand! What a reward. I had not won anything since 2000 and I am now Dakar’s Number One! I just cannot believe it.”

Marc Coma : « Many sacrifice to get there »
“Staying focused was essential so I did focus on my riding. It was the only way to win. What was really tough was that I could not let my guard down, not even for a second. When a tough was ending, the next one was even tougher. We all know that a Dakar is a difficult race but this year it was particularly difficult. This victory is the reward of all the hard work, the reward of many years and a lot of tensions over the last few days. It is the bonus you get for steering right and for so many sacrifices over the years. I have to pay tribute to all the people in my team, who supported me. We had ambitious goals and to reach them we had to have the best, people made for the Dakar and willing to all work towards the same goal. As anyone in the Dakar, we had tough times. So I am going to get some rest and think about the future. Becaue, truth is that with the race and the permanent tension I did not have time to think about anything else in a long time.”