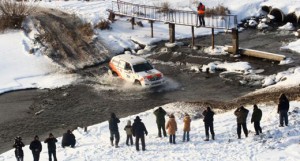 I know that Belgorod is 21 hours on the train from St Petersburg, but I’m not entirely sure where in the vast expanse of snow and ice called Russia it is. I have no map but my friend tells me we are almost at the Ukrainian border and as we follow Ladas and rusty old buses along the potholed road I wonder if Chernobyl is still smouldering away somewhere just over the horizon.

Belgorod is not a pretty city. It was almost totally destroyed in the Second World War and wasn’t re-built too sympathetically with nothing but crumbling apartment blocks hastily erected in the fifties lining the streets, but I am not here as a tourist, I am here for something that very few non-Russians have ever ventured to see, the Russian Rally-Raid Championship.
In the Dakar, which took place just a couple of weeks before, crews tackled the baking sands of the Atacama, but here’s it’s a different extreme. It’s cold, really cold, –18 to be precise. The hairs on the inside of my nose prickle as they freeze and my breath makes icy beads on my beard. Such temperatures in Europe were recently headline news, but here in Russia at the beginning of February such barely tenable conditions are actually considered perfectly normal.
Scrutineering for the 32 entrants takes place in a partly constructed aircraft hangar on the outskirts of town and past the brutal looking pair of G-Force Protos with their Chevy Corvette engines growing on tickover I am drawn to a very peculiar looking machine… an 80 Series Land Cruiser pick up… To save the surplus kilos that the back door and half the roof cost someone had been rather free with the angle grinder, but the end result looks brilliant!

A piece of ground frozen rock solid was the service park but the cups of hot tea and cognac that were freely passed around helped take the chill off. The 7 litre V8 G-Force Protos of Gadasin and his team-mate Bogdan Novitski roared off from the start and on their studded tyres made short work of the solid ice track. Behind them was Alexander Burkut, a 5 time Dakar entrant, a couple of nice ex-works Mitsubishis, the father and son team of Victor and Anatoly Volikov, current T2 champions in their immaculate Land Cruiser Prado, some heavy looking Nissan Patrols and further down the field some Russian vehicles, Lada Nivas and a few UAZs. An UAZ is the Soviet era equivalent of a Series Land Rover and the more modern ones are kind of like what a Land Rover would be if they’d made a Series 4 instead of the 90… leaf-sprung and utterly basic, but great fun… at least until before they break, that is, as they have the same reputation for reliability that the British manufacturer used to enjoy…

The ‘Belogoria Baja’ certainly not the world’s highest profile event and several people told me that I was the first European not from the Baltics who had ever visited but there is something rather special about this event. Far from being just a short loop around some local farmers field I was imagining, the course wound its way through the pristine snow over the frozen rolling hills for an amazing 180km! It had taken a guy on a tractor over a month to plough it out and 130km weren’t on actual roads at all, but followed the edges of fields and boundaries, the ridges of bluffs and the courses of frozen rivers… all on the site of the Battle of Belgorod, the biggest tank battle in history. It was a stunning feat and from up in the helicopter the snaking dirty ribbon of frozen soil that the car’s studded tyres had clawed to the surface, winding off far further than the eye could see, was a breath-taking sight. After a short Super-Special to set the running order two anti-clockwise runs comprised the Friday running and two more the other way on Saturday meant that the competitors had 720 competitive kilometres to drive!

With 8 titles to his name Gadasin is ‘Mr Russian Rally-Raid’. He’s now even a two time FIA Baja World Cup champion so has long since outgrown the national series, but he said that the ‘Belogoria Baja’ is a great place to tune the set-up for the upcoming FIA events and his friend Anton Melnikov explained, all drivers love the route. “It’s fast and flowing and then tight and technical so a driver can really have all of his abilities tested. It’s brilliant!”
Most people expected Gadasin to just drive off into the distance at the top of every timesheet, but surprisingly at the end of the second stage it was Novitsky who came powering into sight first. At last year’s Portalegre 500 in Portugal Gadasin retired and lost a third title because of a fault with a fuel filter. Such a small component seems inconsequential but when an engine is deprived of fuel it overheats… and a s a legacy of that a cylinder cracked leaving him stranded helplessly at the side of the track.

Burkut suffered gearbox problems that cost him a lot of time and then had a few small offs so Novitsky drove to a victory that would have been pretty easy if his co-driver hadn’t lost his voice and had to hold up the legend for him to read and a faulty oil pressure light kept making him think that the engine was about to explode like his team-mate’s. But the talking point of the event was Bogdan Vavrenyuk’s amazing second place, ahead of the T2 champions, the Volikovs… in a well-prepared, but still almost standard UAZ!! “I had a good co-driver and had no technical problems,” he shrugged absently after blitzing the third and fourth loops.

The awards dinner was what the Russians do best; hospitality. Stunning girls handed cups out to the winners and the champagne flowed free… as did the questions to the novelty foreign journalist. Do I like Russia? Did I have a good time? Was it a good event? The answer to all was a resounding yes!

The ‘Belagoria Baja’ might only be a local event, but it is definitely world class!!

Join the OiLibya Rally of Tunisia to celebrate its 30th anniversary!

Commencing two months earlier than the two previous editions, the Silk Way Rally will be covering new ground this year. The race,...
Copyright 2011-2016 Rallyraid.net - RISE Network. All Right Reserved.
Back to top