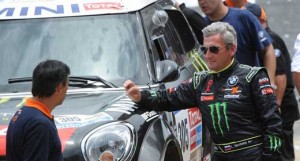 The winner of FIA World Cup 2010 Russian pilot Leonid Novitskiy, who is the official driver of BMW X-Raid team, actively prepares for start of a new season together with his team-mates. Some interesting details and news from BMW X-Raid was announced in the interview with Novitskiy.

If there are new changes in BMW X-Raid cars and team for 2011 season?

In technical part, the big work will be made and already been started. After «Dakar 2011» which has passed for our team not very successfully, conclusions and constructive decisions have been drawn, and now new changes are installing. I can’t give all details, because this work is long-lasting and there is no any confirmations that all new decisions could be installed in cars. At the moment I can confirm the reduction of car weight approximately on 40 kg, kick down of center of gravity as a result of some configuration changes, and some changes in position of the center of weights for improvement of car’s running. We understand that this work should be made very slowly and carefully, other way it can have negative consequences in general work of the car. So, our main purpose is to bring the cars in perfect condition to next “Dakar 2012” and test all new settings during our participation in FIA World Cup 2011 events.

For the team line-up there is no changes in official pilots list: Stephane Peterhansel, Krzyzstof Holowczyc and me, Leonid Novitskiy. Who will join the team this season will be informed later after negotiations on management level. 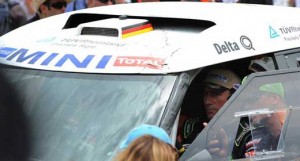 What about new Mini ALL4 Racing? If it will take part in coming World Cup?

Yes, Mini will be presented on a FIA World Cup 2011, and quantity of Mini will grow, and the program will develop. To the next “Dakar 2012” we should come with a minimum of three cars Mini renew and prepared in high level.

After the exclusion from the team Guerlain Chicherit, Stephane Peterhansel became the new official pilot of Mini. It happened in Buenos Aires during the finish podium. I gave the key from Mini to Stephane when he went down from the podium on his race BMW X3. So he will definitively drive Mini and I will also drive Mini on some stages of FIA World Cup.

Monster Energy remains with BMW X-Raid for a season 2011?

Yes, the team signed a contract with Monster Energy for 3 years. Besides, there are also other companies interested in cooperation, therefore on some stages we will appear also in other Sponsor colors, not only in Monster.

Let’s talk about you and your crew. How is your left arm after the fracture of a brush on last “Dakar”?

The situation with my arm is slightly worse, than was planned. There is still a pain in arm, restoration process isn’t finished and I can’t do the physical exercises. So we work with doctors and develop a special retentive bandage to unload the injured arm.

You won the FIA World Cup 2010. What feelings? What is your plan for this year?

The main feeling is responsibility. For me to win a title is half-affairs, and to save it is much more difficult. I consider that professional driver should be stable and show the high results regularly. So, for me and my co-driver Andreas Schulz the main goal for this year is to repeat the success of 2010 and to keep the titles.

The first event of FIA World Cup 2011 is Italian Baja. X-Raid will be on start line?

So see you in Italy and wish a good luck!

On the 16th and 17th of April will be held Ervideira Rali TT 2011. The center of the event will be as usual in Reguengos...
Copyright 2011-2016 Rallyraid.net - RISE Network. All Right Reserved.
Back to top