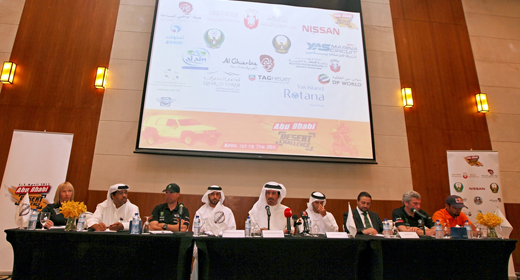 “Among the 120 entrants in this year’s rally are some of the world’s best off-road drivers and riders,” said Mohammed Ben Sulayem, Vice-president of the FIA and president of the Automobile and Touring Club of the UAE (ATCUAE). “Alongside these internationals stars are a contingent of determined local entrants, who are a credit to the UAE for taking on this demanding challenge. The strength of field ensures motorsport fans an exciting week of world-class action.”

As one of the most experienced off-road drivers in the UAE, Bel Helei is no stranger to the Abu Dhabi Desert Challenge. He has competed in every race since 1990 and has achieved a number of wins in both car and bike categories over the years. “For me and many other Emiratis, the Abu Dhabi Desert Challenge is the rallying event of the year,” said Bel Helei. “I speak on behalf of my UAE compatriots when I say that we cannot wait to take on the world’s best racers for a spot on the podium.”

With 1,570 competitive kilometres across the vast natural beauty of Al Gharbia in Abu Dhabi’s Western Region awaiting the field,  the international stars also stated their determination to tackle the of uninterrupted dunes and testing terrain in the coming week.

“The Abu Dhabi Desert Challenge is one of the best long-distance rallies on the calendar,” said Coma. “The deserts here are among the most spectacular in the world, making the hugely demanding challenge a joy to compete in.”

This year’s Abu Dhabi Desert Challenge sees a new direction for the rally, with the bivouac and headquarters moving adjacent to the luxurious Qasr Al Sarab Desert Resort by Anantara. This not only creates a superb backdrop for the adrenaline packed race, but also makes the rally more accessible to spectators. Fans will also be able to get up close to the stars at the qualifying Super Special Stage, which will be held next to the Marina Mall this Saturday (2 April) from 3pm and which is free to attend.

A spokesman for the Abu Dhabi Tourism Authority (ADTA), which organises the event alongside ATCUAE, explained the purpose of adding a spectator-friendly urban addition to the traditionally rural race itinerary.

“The Super Special Stage will ensure that the Abu Dhabi Desert Challenge attracts the attention of thousands of fans living in the more cosmopolitan area of Abu Dhabi city,” said Sultan Al Muhairi, a representative of the ADTA “It is our priority to continue evolving the event and the decision to add this urban element will freshen up the race route and allow drivers, teams and fans the chance for heightened interaction before the field heads into the desert.”

The Abu Dhabi Desert Challenge is one of the world’s top cross-country rallies and continually attracts some of the most famous rally drivers and riders from across the globe. It will take place from April 1-7, and consists of four categories: bikes, quads, cars and trucks.

The event is organised by the ATCUAE under the title sponsorship of ADTA, and is held under the patronage of HH Sheikh Hamdan Bin Zayed Al Nahyan, the Ruler’s Representative in the Western Region.  It is backed by a high-profile line-up of sponsors and supporters that includes Al Gharbia, ADNOC, Rotana – Yas Island, Al Ain Water, TAG Heuer, Explorer and Nissan – the all-terrain Nissan Patrol, dubbed ‘The Hero of All Terrain’, is the official vehicle of the Abu Dhabi Desert Challenge.

Meanwhile, a landmark partnership with Eurosport TV will see daily global broadcasts of all the 2011 Abu Dhabi Desert Challenge action. 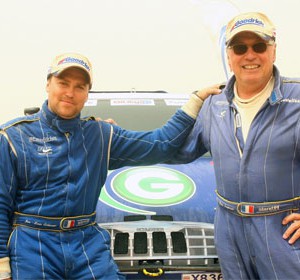 Loyal participant in the Rally of Tunisia driving his buggy since the 90s, Jean-Louis Schlesser is trying to chain another...
Copyright 2011-2016 Rallyraid.net - RISE Network. All Right Reserved.
Back to top