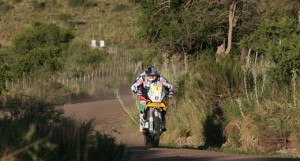 After a meeting between the Dakar-organiser ASO and the Bolivian President Evo Morales last week, race-director Etienne Lavigne said, that the Rally will not cross Bolivia in 2012. “For 2012 it is very difficult, but for 2013 there is a possibility that will be analyzed” Lavigne said to local journalists after the meeting.

More and more it becomes reality, that the 2012 edition of the South-America Dakar will start in Argentina (Buenos Aires), cross Chile and will finish in Lima, the capital of Peru. South American medias now wrote, that Peru could be announced officially this month, but the ASO didn´t confirmed this now.

The Austrian energy-drink company and Dakar-sponsor “Red Bull” announced on February 19th the new finish in “Lima”, the capital of Peru. During a report about the sponsored Dakar-winner Marc Coma from Spain, Tim Sturtridge from Red Bull wrote at the official Website: “The 2012 Dakar will pass through Peru’s Asian District as it finishes in Lima. In fact, all of the last three stages of the 2012 Dakar will take place on Peruvian soil. It will be new territory for Marc but he will be hoping the last leg to Lima delivers his fourth Dakar victory.”

The first Festival TT is in its final countdown: less than a week is left until the 1st Festival TT, which is a unique and so far unknown...
Copyright 2011-2016 Rallyraid.net - RISE Network. All Right Reserved.
Back to top