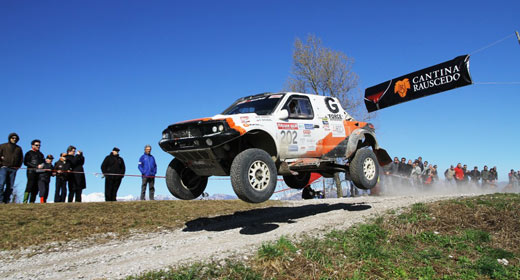 The “Zar” of St. Petersburg won the race, ahead on his challenger Novitskiy from Moscow with Bmw of the X-Ride Team; third position for the German Kahle with Sam Mercedes. Codecà (Suzuki) seized the eighth position in the overall ranking and the first one among Italians. Triumph of the biker Basso (Husqvarna), as it happened last year. Portuguese fight among quads with the victory of Mendes with a just 3’’ gap ahead on Acurcio De Sousa. Great Festival at the Fair with final apotheosis on the arrival stage and drifting’s emotion thanks to the exhibitions of Graziano Rossi

Russian triumph at the Italian Baja, opening race of the Fia World Cup for Cross Country Rallies. The “Zar” of St. Petersburg Boris Gadasin, together with Dan Shchemel on his Pick-up G-Force Proto, won again for the third time , as he did in 2007 and 2009, with the time of 2h24’03’’, and a gap of 52’’ ahead on the challenger Leonid Novitskiy from Moscow, official Bmw driver navigated by Andreas Schulz. Third position for the German Matthias Kahle (Sam Mercedes) with a gap of 3’36’’, fourth place for the Czech Miroslav Zapletal (Bmw X3) with a gap of 7’34’’, while the fifth position was seized by the French champion Jean Louis Schlesser, who was already used to fight at the Italian Baja. His 2 driving-wheels Buggy had to recognize the power of the 4 driving-wheels vehicles, also because of a ground made even harder by the mud, after last week’s heavy rain. Foreign teams are as usual on the top of the overall ranking, seizing the first seven positions. 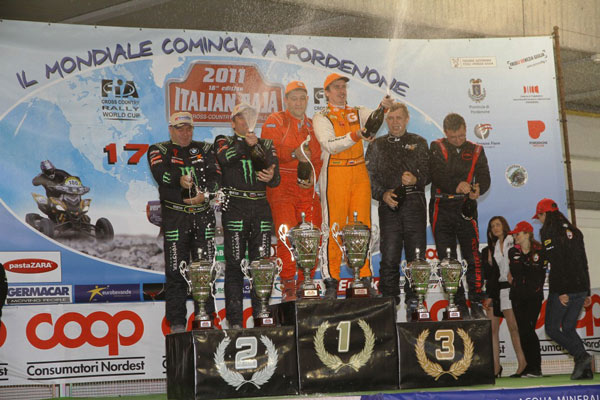 The Spanish Joan Roca, suddenly first after the prologue on Friday, unfortunately had to retire because of the broken steering-wheel.

Hard fight also among Italians during the race, which was included in the Fia World Cup. Lorenzo Codecà, driving his Suzuki Grand Vitara, gained the eighth position in the overall ranking, coming finally back to the top of the Italian Ranking, after he had to retire twice. The second position was reached by Mario Ricci with Nissan and the third one by Alessio De Angelis with Mitsubishi. Considering that, thanks to the system by points, the winner is supposed to receive the prize of 25 points and the first Team 5 points, and keeping in mind that at the Italian Baja there is an increased coefficient (1,5), Codecà was able to gain 45 points, Ricci 31,5 and De Angelis 24, and this already means for him a serious possibility to win the Cup, as it happened last year to Giovanni Manfrinato (Renault Megane), who this time had to quit the race because of a fall into a fosse.A great disappointment for Valter Benazzato too, leader on Saturday until he had to stop because of an engine problem and an unhooked wheel .

Foreign domination also among quads, thanks to the victory of the Portugueses Andrée Mendes ahead on Acurcio De Sousa, with a gap of just 3’’, while the third position has been seized by Simone Toro (all of them on Yamaha). Thrilling show among bikes, with the second success of Alberto Basso with Husqvarna. The biker from the near town Porcia was able to get an over 5’ gap ahead on Ugo Filosa, actual vice European champion, who seized the second position, and the Portuguese Rui Costa (everybody riding Husqvarna).

A real Motor’s Festival took place yestarday at the Pordenone Fair, where Italian Baja’s starts and arrivals went on for the whole day until the sumptuos prize giving ceremony, together with drifting’s emotions and the joyfully Securlandia area. Graziano Rossi was the protagonist of the drifting show, together with the bravest public who deared to sit beside him, in the name of his friendship with the Simba Onlus Association, which helps the research for the Behçet syndrome; in the meantime kids and children could have fun at the Securlandia area, dedicated to road safety. 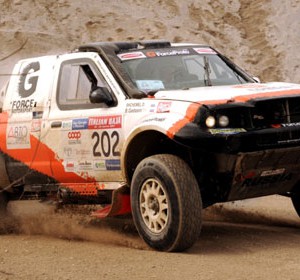 Hard fight between Gadasin and Novitskiy, separated by a 28’’ gap after the first SS. Codecà is the Italian leader....
Copyright 2011-2016 Rallyraid.net - RISE Network. All Right Reserved.
Back to top