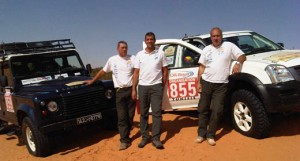 At the end of February the NPO team joins Tunis and goes directly to the South of Tunisia to realize the 15 days of reconnaissance of the route of the OiLibya Rally of Tunisia 2011.

“The city is quite and everything going well during the journey” say Stéphane Clair. “Direction the dunes of El Faouar where we will stay for our first bivouac.  The reconnaissances are based on two days of work per selective sector to create the route, check GPS points, and design the road-book.  With the ISUZU, we open the road following by an other four wheels drive vehicle. Competitors will have to be attentive into this sea of sand but we manage to cross it so they will be able to do it too!… 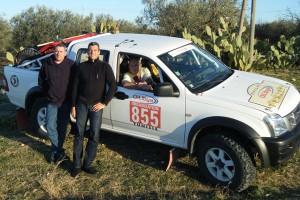 Like every year, the “recos” team ist accompanied by a Tunisian Colonel of the army and an Tunisian specialist of the South who share their experience of the tunisian field with them. Sunday the 27th of February, the first sandy special is done!… We start the second one which will be composed of less Dunes crossings. Monday the 28th of February, another bivouac in the middle of dunes after finishing the second stage. 1st of March, the night has been cold and windscreens were frosty, later they continue the work into the sand around Ksar Ghilane. “When the 6 Stages will be designed and checked, the final order of the global route will be determinated. When I will be back to France, I will give you more details” Stéphane Clair said. 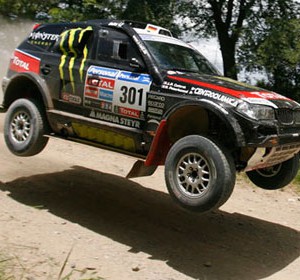 The winner of FIA World Cup 2010 Russian pilot Leonid Novitskiy, who is the official driver of BMW X-Raid team, will start...
Copyright 2011-2016 Rallyraid.net - RISE Network. All Right Reserved.
Back to top