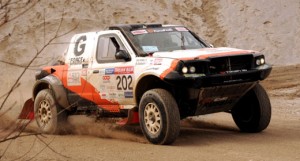 Hard fight between Gadasin and Novitskiy, separated by a 28’’ gap after the first SS. Codecà is the Italian leader. Among bikes the first position is seized by Basso, while the quads leader is the Czech Kubiena .

No surprising results during the Italian Baja’s first day, which also opened the World Cup Fia Cross Country, as the Russian Boris Gadasin (G-Force Proto) and Leonid Novitskiy (Bmw X-Ride) leaded the scene, with a 28’’ difference’s gap, while the German Matthias Kahle (Sam Mercedes) seizes the third place with a gap of 1’36’’. Forth position for the Spanish Joan Roca (Mitsubishi L200), with a gap of 2’17’’, who leaded the Super Special on Friday. Foreign drivers seize the first seven positions, with Jean Louis Schlesser (Original Schlesser) at the sixth place with a gap of 4’09’’, as his 2 driving-wheels Buggy had of course more difficulties on the muddy ground.

The Italian leader, who also seizes the eigth position in the overall ranking is Lorenzo Codecà (Suzuki New Grand Vitara) from Milan.

The challenge between the “zar” of St. Petersburg Gadasin and the official Bmw driver Novitskiy, from Moscow, inflamed the enthusiasm of all fond of Off Road’s cars along the two tracks’ route, the first one from Zoppola to Spilimbergo (36 km) and the second one from Spilimbergo to Valvasone (22 km), that drivers will have to face twice more tomorrow in the opposit direction, before coming back to the Pordenone Fair; here the Prize Giving Ceremony will take place on the podium at 3:30 p.m.. Only three retired drivers in yesterday’s Fia race, as there was no danger to face on the Cosa and Tagliamento riverbeds. It was a pity that Giovanni Manfrinato (Renault Megane) felt into a fosse on Friday’s prologue and was already k.o.

BIKES. Huskvarna leaded the overall ranking, thanks to the first four positions leaded by Alberto Basso from Pordenone, who reached the arrival line with a time of 1h09’40”; he got a gap of 3’56” ahead on Ugo Filosa and of 4’07” ahead on the Portugues Rui Costa.

QUADS. Foreign podium with the Czech leader Tomas Kubiena (Suzuki) who arrived in 1h12’07”, followed by the Portugues André Mendes (Yamaha) with a gap of 1’51” and the Polish Luzask Laskawiec in the third position with a gap of 2’19”. 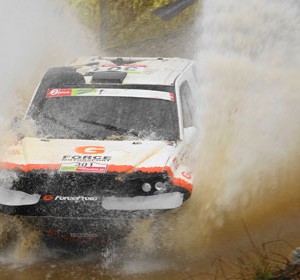