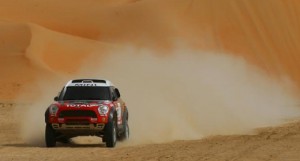 I said yesterday that the temperature felt more than the 36 degrees I was told it was. Well, it was. It was actually 46! I had a chance to borrow a car this morning so after deciding that the ashphalt road from th start looked a bit too  boring I set off with a stylised map and a GPS along a sandy road that was shown to intersect the course about 30km away. It was a good plan… until I got to the security control for the oil fields the track headed into and was stopped by two uniformed guys with AK47s slung over their shoulders.

“You have special permission?” one asked, ut of course I didn’t and the large sticker that said ‘Press’ in big letters on the door suggested that I had photo equipment with me, something which according to the 3 meter high sign at the side of the road was expressly forbidden. Smiles, pretended incoherence, the handing over important looking car-rental agreements and eventually cash all served to do the trick and at the far end of the track, about 5km from the Saudi border and a plumbe of white dust caught my eye… and a tiny black dot at the head of it, racing across the horizon. 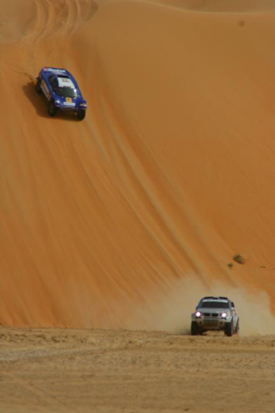 I saw the marks coming down a massive dune but at first couldn’t beleive they were tyre tracks… until Stephane Peterhansel came over the top, his Mini siloetted against the pale blue sky… and then began to slither down a near vertical slope before powering across the small salt plain and up the next huge dune. A few minutes later Novitski came over, but was visibly less confident than his team mate, slaloming down from side to side like a downhill skier… with Schlesser catching him fast. There was then a bit of a gap to Gadasin but he was the most dramatic as he locked up near the bottom creating waves of sand before blasting away… on his way to fourth on the first section. The day was split into two stages which Boris thought would suit him as he would have a rest in the middle, but the lingering effects of yesterday’s heatstoke were more serious than he thought and he couldn’t continue. His team mate Roman Briskindov explained what it is like in the cockpit racing for hundreds of kilometers across the desert. “Imagine a 4 wheel drive oven that’s almost 70 degrees and you have a tiny little fridge which you can open…”

One of the undoubtable heroes of the event has to be Saeed Alhameli who is competing in a T2 nissan Patrol without a co-driver. Maybe you’d think that it’s possible to do, pulling up at every junction to check the roadbook and following along at the back of the field, but actually on the first stage he was 6th … not just in class, but 6th overall! Yesterday’s second stage in the oppresive heat was a bit too hard though and like Gadasin, Saeed suffered from heatstroke so that he couldn’t concentate on the road and the notes at the same time. Today though he had a good start, “I was passing the cars in front, one by one and was impressed that everyone was so polite with getting out of the way, even the Kamazs. But then around midday the wind changed and the heat came strong to the temperatures all went up, so I had to drive slowly to keep everything under control. In the second section though I tried to step the speed up and took a few risks in te dunes but I got stuck… but I must say something for Mirza Bin-Suqat in the 208 Patrol because twice he stopped to pull me out… but I am 11 hours back with my penalties, while he is still near the front of the class!” 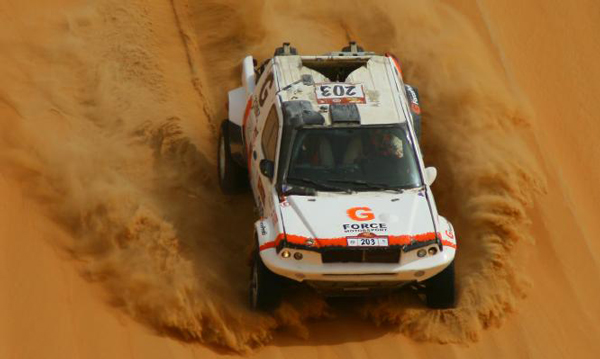 Back in camp I set off to try and find the elusive JL Schlesser, but it seems that he likes to go off to the hotel early as I have never seen him around camp, so still I haven’t got his thoughts about the event. Also a little thin on facts is what happened to Peterhansel today. He wasn’t around for comment in the bivouac, but some say he had a puncture, others that he got stuck… and some say that Novitski went by on a different route… while one rumour suggests that he just didn’t want to stop… Until he tells something himself it’s all rumous and happenstance though, but whatever happened, some 12 minutes were lost and the Russian has leapfrogged the Mini to take the lead for the first time. The official stage results haven’t been published yet, but by my mental calculation Novistski should have about 8 minutes over his team mate.

But tomorrow is a monster… another stage of around 300km over the huge dunes in the Empty Quarter and then loops up in the plains to the north… Nothing in the leaderboard is set yet! 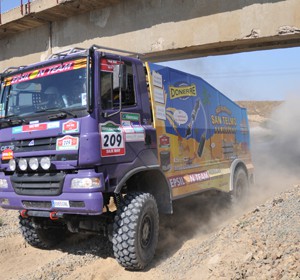 Next July, the Silk Way Rally will start with a stay in Moscow, where the drivers will discover the Luzhniki Stadium, the hub of the 1980...
Copyright 2011-2016 Rallyraid.net - RISE Network. All Right Reserved.
Back to top