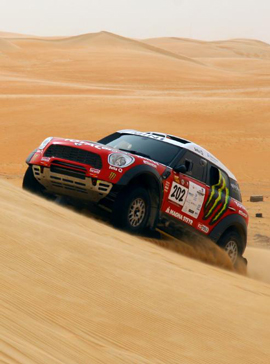 If 350km of soft-sand dunes in temperatures nearing 40 degrees in one of the most inhospitable and sparsely inhabited places on earth wasn’t a hard enough challenge for the competitiors, those who had survived this far also had to contend with a sandstorm that blurred the edges of the dunes, making it almost impossible to judge how to drive them… But through all of this one man came to the fore today in a masterful drive that blew his rivals away harder than the desert wind. “The first day I was sick, the second and third I made stupid mistakes but today was the true time,” said Stephane Peterhansel, stage winner by nearly 20 minutes. X-Raid team mate Leonid Novitski had no answer for the Dakar legend and dropped time because he was suffering from exhaustion. “But it’s full attack tomorrow!” he smiled.

The tough conditions took their toll on the field and only 11 made it to the finish… Here are some of the stories….

The reason Nissah Al Shanfari wasn’t around last night was because he launched his buggy over a dune so far that the landing broke both of his buggy’s front arms and a wheel… and was then hit by Fadi Melki who was in the process of making the same mistake… Today though, he was caught out by something a little less dramatic… the water pump failed. “With my penalties I am four days behind the leader, so it wasn’t worth pushing on and risking the second engine. My luck in this rally has been terrible,” he sighed. “But not as bad as G-Force’s!”

Despite all of his problems Boris Gadasin was still driving flat out, pushing himself and his car to the limits in what has become an extended desert driving test. But once again he was caught out over a nsaty crest and the car tipped onto it’s roof. It wasn’t a hard roll and so they waited for someone to come and help them back onto their wheels… and after a few minutes saw their team mate Roman Briskindov coming… and saw how heavily he landed after a jump a few hundred meters away… Then they noticed that he wasn’t moving. When they got there they found Briskindov in extreme pain with his back and the medical helicopter was sent out for him… 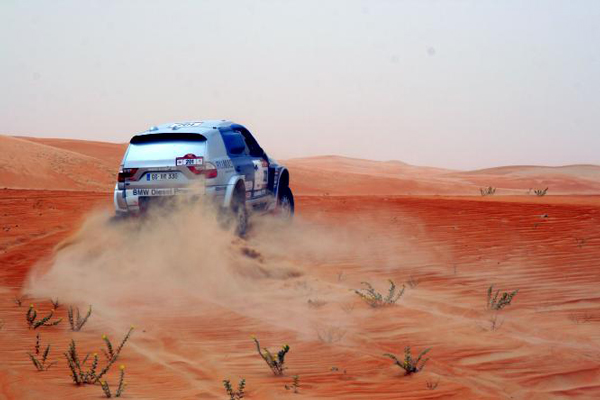 Schlesser went off the course slightly and got stuck on a dune, which cost him almost an hour, but he always heads straight off to the near by hotel so I haven’t managed to catch up with him yet…

Fadi Melki started well and all was fine for the first 30km… They came across Gadasin and helped turn him over, but because of a broken exhaust started to have problems with fuel vaporisation. His co-driver, Dane Novarlic, was still smiling in the camp and explained, “In such a tough competition small things can cause such big problems. You can never underestimate the power of the desert and regardless of the heat you have to keep your head cool. Lying in your a sleepingbag in the camp is better than the nice white sheets in a hospital!” They fixed the exhaust in a little workshop and with a smile he said that he’s ready for the fight to the podium tomorrow!

Parked under the same canopy were Team Saluki with the mean looking Predator Buggys lined up. Quin Evans, co-driver for Mark Powell told me the highs and lows of their day. “Through CP1 and 2 we were 4th overall, which is actually the highest we have been so far, but then we started to have some fuel problems that we just couldn’t fix. It was a hard day today though, the wind blowing the sand made the edges of the dunes very hard to define.”

In his sparce and immaculate portable garage I found Saeed Alhemeli sitting crossed legged, smoking a pipe. “One thing about today is that you have to be very, very fit, because nevermind the technical driving after 350km like this, with the dunes, pockets and the wind making the lines blurry, it will kill an unfit person,” he said. 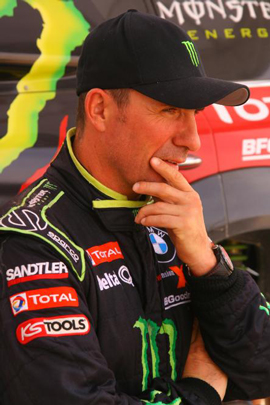 Today I also finally managed to see the Kamaz trucks, but they are having a strange competition. Contary to what some people have said, there is no inter-team competition to see who will fill Chargin’s empty seat, the driver line up is finalised already, they are just here to train for the Dakar. But instead of trying to blitz the stages as fast as posible as though they were in South America, they are acting like benign sweep trucks, picking up the devestated midfield and backmarkers scattered along the route. But, no matter how cool it is to watch the Mini and G-Forces power past the Kamazes are something else. The air doesn’t ring with the sound of an angry V8, the ground shudders with their approach and the huge, low-revving engines chug instead of roar as they lumber by.

Back in the camp it was a subdued atmosphere with teams packing up ready to start the drive back to Abu Dhabi, but the wonderfully hospitable Nizar Al Shanfari let me take his massive International MXT out for a test drive (story coming in a few days). And then news came back from the hospital about Briskindov; unfortunately it was a serious accident; the landing was so severe that he cracked his tail bone, but it could easily have been a lot worse. Boris quit the stage so he could help Briskindov’s co-driver get the G-Force out of the sand, but he will be restarting tomorrow, getting as much practise on the sand as possible.

So tomorrow is the last day. A seriously fast stage heading north towards back to Abu Dhabi and the ceremonial finish back in the luxury of the Yas Marina. Peterhansel has 14’19 in hand over Novitski who is himself around 50 minutes ahead of Schlesser. Maybe the battle has already been fought and Peterhansel will have an easy run to the end, or maybe Novitski can produce a stunning drive to snatch victory… For the rest, those that make up the soul of the event, just getting back to Yas Marina will be victory enough… 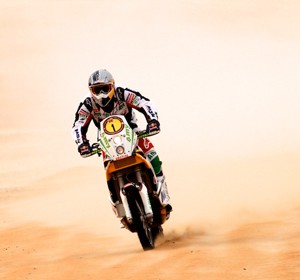