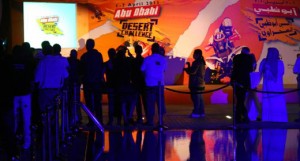 The Taj Mahal, they say, was built as a monument to love. The Eiffel Tower stands tall as an example of structural engineering as the Hagia Sophia does to the testament of God, but the cities of Dubai and Abu Dhabi exist unashamedly as nothing more than a celebration of wealth. The mirror-fronted temples are erected in honour of the deity whose disciples live in extravegance and opulence from the profits of his thick, black blood. The calls to prayer that echo out from the minarets are for Allah, but the belief is in oil! 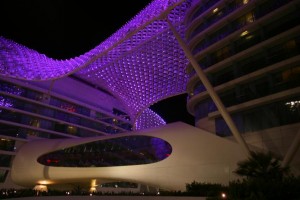 I am in a 5* hotel in Yas Marina overlooking the F1 circuit looking down at the X-Raid team trying to usher the eager-eyed valet parkers away form the Mini, still with a smile on my face from driving a guy’s International MXT around the hotel complex.

I am at the Abu Dhabi Desert Challenge where some of the world’s best Rally-Raid cars sparkle under the blistering desert sun and famous names from all corners of the motorsport world mingle by the pool or in the hotel reception. When I was a kid I had a 1/24th scale Tamiya model of a Le Mans Mercedes with JL Schlesser’s name on it and here he is at reception waiting for me to convince

X-Raid’s Stephane Peterhansel and Leonid Novitsky are here shuffling the Mini and X3 between the Porsches and Maseratis that clutter the drop off point. Peterhansel is behind the wheel of the Mini to do development work, although he says that under the skin it is much the same as the X3. “The Mini is lighter in the rear which makes set up a little different and the body is a different shape so the aero characteristsics are not quite the same as the BMW.” But the biggest reason X-Raid are pushing development with the Mini is marketing. Novitsky says, “It’s a new car and visually it’s very striking, which is good for promotion.” and he’s right, side by side it’s the Mini that all eyes are drawn to… Novitsky is not hoping that the Mini is a much better car than the X3 though. He won last year’s event, is the reigning champion and looked me straight in the eye as he said, “I am here to win!” 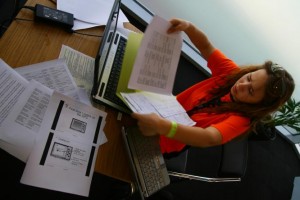 2011 FIA World Cup championship leader Boris Gadasin in his friendly G-Force team are also here although already stressed after the paperwork nightmare of getting the cars and trucks to UAE straight from the Italian Baja. The trucks came on a ship but the cars were flown in and the mechanics spent a couple of days lying on the hot tarmac getting them ready for scrutineering. Boris and his team mate Roman Briskindov spent a couple of days in the desert with local expert Saeed Alhameli to improve their sand driving skills.

“Did you learn anything useful?” I asked Roman. “To follow camel shit!” he replied… but Saeed explained that this was actually serious advice. “Camels don’t just climb up the dunes for fun, they only walk on the roads they know, so if you follow the camel shit you know that the track you are on is going to lead you somewhere…” Roman joked that he is only here for the experience and hopes to get a tan while his co-driver is digging the car out of the dunes… but despite that fact that he’s only done a few normal rallies before and has never attempted something on such a scale before you’ll be surprised at his Prolouge time! 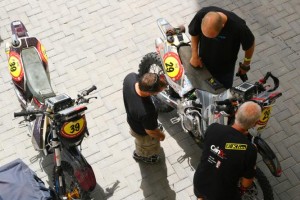 Something I hear quite often is people saying that they are here just to practise for the Dakar as the terrain in the ‘Empty Quarter’ is quite unique, but Marc Coma likes this event for what it is. “It’s a beautiful rally,” he said, “but yes, always we are thinking about the Dakar. We have a 450cc bike now so we will concentrate on the set up, but there is always something new to learn.”

When everyone is just bimbling around the hotel lobby or at the free drinks gathering they are meeting old friends and rivals and are a little unwelcoming of a two metre tall Welshman jabbing a pen at his notepad as they speak, so in camp after the first day I will get some more in depth views about the event and championship. 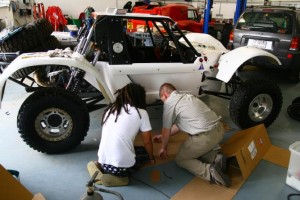 Ones to watch out for are Team Saluki in their mid engined buggies. They are small but light and team leader Mark Powell, a really nice, laid-back British ex-pat is well experienced with desert racing. I spent a day at their workshop before coming to the race and will explain what the Preditor has in common with a Unimog and an F1 car…

The truck category is represented solely by Kamaz and no one in the Russian team I spoke to bothered to say anything complimentary about this event. There is never anything pretentious about Kamaz; they are here to practice for the Dakar, nothing more. But something that is in evidence as the blue T-shirted crew hang about in the large pools of shade their large trucks create, is how young everyone looks. 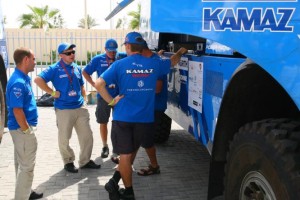 Long term team leader Vladimir Chagin’s name won’t grace any more entry lists and so Kamaz are busy developing the next generation of drivers. Eduard Nikolaev, last year’s Silk Way winner is just 26, but Ayrat Mardeev is just 24, being co-driven by his father Ilgizar, who finished fourth in the Dakar.

And one of their teachers… no less than Chagin himself. There was some delay with the trucks, although no one would explain why, so they were in the dunes in Nissan Partols which strangely Nikolaev said are not all that different from the trucks. “In principle the Kamaz is just like a 4×4, just the size is different!” Although thee are no other trucks in the event it is still pretty special to see these 8 ton beasts lined up in the F1 paddocks. 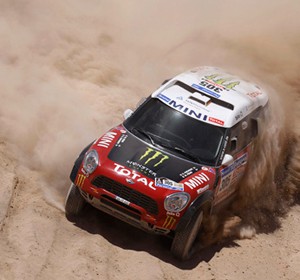