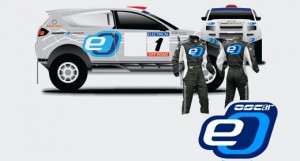 Latvian-built electric rally raid vehicle to be the first of its type in the world
Andris Dambis, director of motorsport engineering company OSC, also an engineer and a rally driver, has taken on a new technical challenge. Making use of the latest developments in electric vehicle industry, his company is preparing a marathon rally car that will be propelled solely by electricity. Dambis reveals, “Electric vehicles can already be seen across various motorsport disciplines but nobody has dared to tackle rally raids like the Dakar. We will be the first.”

The OSCar eO project involves participation at the 2012 edition of the Dakar, the most demanding endurance event in the world, with the goal of completing the distance and winning. Project initiator and multiple Dakar participant Maris Saukans explains, “It might sound audacious but we are indeed aiming to win the category for alternative energy vehicles.”

Extensive support from Dakar organizers
OSCar eO will be entered in a special car category that was introduced in the technical regulations a few years ago but has not attracted any competitors since. When meeting the French company A.S.O. which is in charge of organizing the Dakar rally, Rally Raid Team Latvia received an enthusiastic welcome and was granted a wide scope of support. Dambis and Saukans were quick in assuring A.S.O. that the project offers new and original engineering and sporting opportunities that also bear relevance to environmental protection.

Sponsorship and major technical partnership with Winston Battery
One of the main components of the new OSCar eO is batteries. These will be exclusively supplied by Winston Battery from the People’s Republic of China. Dambis states, “They are one of the leading electric vehicle battery manufacturers in the world and we could not have wished for a better product for the eO vehicle.” Two powerful permanent magnet electric motors of combined power of 180 kW will allow OSCar eO to develop top speed of 140 km/h. While that might not be much, eO does not aim to compete against the conventional vehicles entered by manufacturers and private teams. Dambis gives more details, “The motors will be able to output up to 315 kW for brief periods of time which will allow us to negotiate particularly steep sand dunes that you find in Atacama Desert in Chile.”

Petrol for electricity generation only
Project engineers expect a fully charged battery pack to provide up to 150 km driving range across the most difficult rally terrain and up to 300 km in less demanding conditions. As Dakar stages are normally several times this distance, OSCar eO will be fitted with an electric generator that will be driven by a petrol internal combustion engine. Dambis clarifies,“We can not do without it. The only alternative is to pack another set of batteries in the car but there are plenty of them already. In fact, we will even sit on some of them as floor area proved to be a practical mounting site.”

The engineer continues, “We have selected a race-proven Nissan engine to generate the remainder of the energy required.” The petrol engine will be fed from its own 200 litre fuel tank. “Yet the propulsion will be 100% electric. The petrol unit will be mounted in the rear of the car and coupled only to the electric generator.” The Nissan engine for electricity generation will be sourced with help from Skandi Motors, official importer of Nissan in Latvia. Electrical systems of OSCar eO will be verified on a Nissan Navara test mule, due to be completed in three months from now.

Regenerative dampers from official partner Donerre Suspension.
Project’s technical partner Donerre Suspension was founded in 1994 by Pierre de Frenne following 20 years of experience in competition suspension systems. The company has always focused on innovation and as of today holds nearly 10 patents, demonstrating engineering excellence in a variety of disciplines. Donerre takes part in the ambitious OSCar eO project by offering a solution for harnessing electrical energy from the oscillatory movement of shock absorbers and thereby providing additional means for battery recharge.

Marathon rally Dakar 2012 will take place from January 1st to 15th, 2012. The route will cover Argentina, Chile and, for the first time, Peru. Competitors will need to tackle more than 9000 km of particularly challenging terrain. Rally Raid Team Latvia will enter the rally with the electric OSCar eO, an on-route support vehicle OSCar O3, and technical assistance trucks. 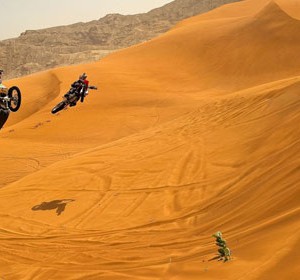 Just days after his fifth triumph at the Abu Dhabi Desert Challenge, Marc Coma demonstrated that he has brilliant...
Copyright 2011-2016 Rallyraid.net - RISE Network. All Right Reserved.
Back to top