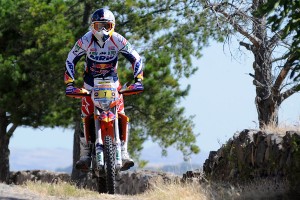 Running over the north of Sardinia, between Porte Conte and Sa Itria, today’s menu featured two specials of 76 and 65 kilometres. And like the previous day, the constant charges of direction demanded maximum concentration from leaders Marc Coma and Cyril Despres – and the others!

This evening the bikes are in parc ferme, as stages 2 and 3 are ‘marathon’ with no assistance. On abandoning their bikes all the riders gave their rear tyres a second glance, as they will have to start with the same tomorrow.

Today towards the end of the second special Despres got close to Coma’s dust, with Coma sensing the danger as the kilometres went by. Marc won ES3 (76 km) and keeps the overall lead ahead of Cyril Despres, who took ES4 (65 km) and in doing so brings down the gap down to 1’49.84.

“Opening for two consecutive days isn’t easy,” admitted the Spaniard. “Especially on this kind of rally, which is more like a big enduro than a rally-raid. To be honest I am surprised to have held on to the lead. It is unusual here in Sardinia.” Added Cyril Despres, “in the first special I hit a big rose and could taste the blood running into my mouth. I also made a small navigation error which cost me a good minute. Then in the following special Marc’s dust became thicker and thicker. I continued to attack – we’ll worry about the rear tyre tomorrow!”

Helder Rodrigues (Yamaha 450) moves up overall to third: “I enjoyed a problem free day.” Unlike Yamaha mounted Jordi Viladoms, who has crashed out with a broken leg.

Stephane Peterhansel (Yamaha 250) gets up into the Top 10 this evening. “The bike is great but the navigation is very difficult. Ahead of me I have a load of Italians who specialize in this kind of event. I don’t even compare myself with Marc or Cyril who are professionals and who commit very few navigation errors. In the second special I rode slower and as result got less lost!”  The other Dakar winner, Cyril Neveu, puts his Beta 450 into 36nd place. 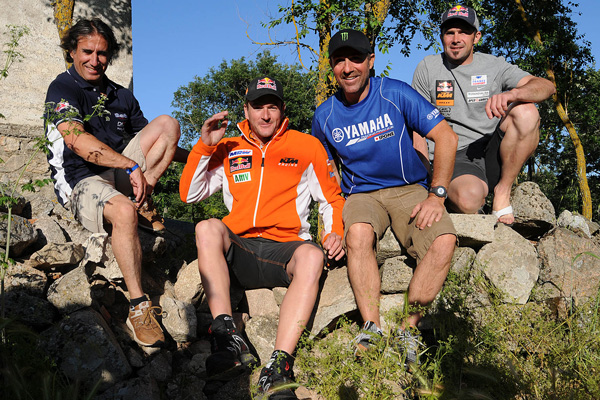 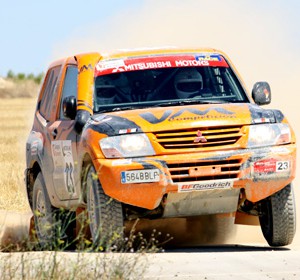 After the first 200 km. The Team VM Competicion with Enrique Reyes and Augusto Roch (Mitsubishi Pajero T2) are the current...
Copyright 2011-2016 Rallyraid.net - RISE Network. All Right Reserved.
Back to top