The UNIQA Hungarian Cross-Country championship went to Kapuvár for the second event this year and also the first of the Central European Zone Trophy. III. Admiral Rábaköz Cup was in addition an event for the Polish, Czech and Slovak championship together with the Hungarian.

35 cars, 2 trucks, 14 quads and 2 motors went through the podium by the starting ceremony on the 5th May in the afternoon. They had to go immediately to the SS1 which was not a superspecial but a longer 30 km stage from Kapuvár to Csorna. Erik Korda (Nissan) was the fastest and he could achive a big advantage (0:38”) in front of Porizek (Hummer) and Szalay (Opel Antara, 0:53”). 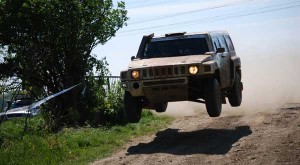 The second day contained 4 selectives: 36 km, 63 km, 36 km in  the other direction, and 30 km. The track was really hard with a lot of off-road difficulties, bumps and holes. A lot of competitors jumped into the ditch, some of them suffered injury too. The couple of Pelc and Pelcova (Mitsubishi Pajero) run into the stream and stoped on the right side of the car, thanks to the firebrigade standing 100 metres far they could came out fast and decided to continue the race, without windscreen. The Romanian Costel Casuneanu (MPR Mitsubishi) didn’t have such a big lucky, he crashed into a hard part of a little bridge and broke the steering-gear, so he had to give up the race. András Lukács (Impala)  after a big jump couldn’t keep the car on the road, rolled two times and crashed a tree. They could continue the race after this unbelievable accident. 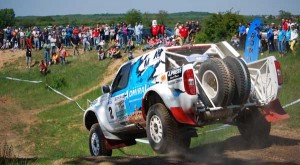 After an exciting first part the afternoon was lighter. Balázs Szalay (Opel Antara) won the stages and didn’t miss any GPS points, so he was leading after two days. Erik Korda got penalty for over-speeding, Fazekas missed a GPS point, so Szalay had a comfortable leading in the Hungarian championhsip. By the CEZ overall Porizek (Hummer) was behind him with 3 minutes. Pál Lónyai (Nissan) had problems with the v-belt during the whole weekend and even the power-steering (servo) broke. Andra Várkonyi (Opel Antara), the nice news presenter in the Hungarian TV2 channel did well, but on Sunday she fell in the ditch at the same place where the others, so she had to forfait. After the nice sunny weather during the first two days it was a heavy rainstorm that made the race more difficult. The two trucks – Miklós Kovács (Scania) the winner of the Africa ECO Race and Zsolt Darázsi (MAN) the T4 race truck of Szalay on Dakar rally had an enjoyable battle between each other, the crowd was shouting and waving whenever they appeared on the track.

In the CEZ overall the best Polish driver was Grajek Wlodzimierz (SAM), he finished forth in III. Admiral Rábaköz Cup.  Jiri Pribyl (Nissan) the leader of the Czech cross-country committe achieved the 7th place in front of the Polish Piot Beaupre (Bowler Nemesis). Darius Zyla (Mitsubishi Pajero) had difficulties and he could do only one stage during the weekend. The experienced driver started in the TH category even he is a good international pilot.

By the quad category Barbara Szabó (Bombardier) had a big crash on Friday but she could continue without any injury. It was Zoltán Hangodi (Yamaha) who won the event in front of Tamás Mészöly (Polaris) and the last year’s champion László Fekete (E-ATV).

Two Elenas crew to start at the Silk Way Rally! 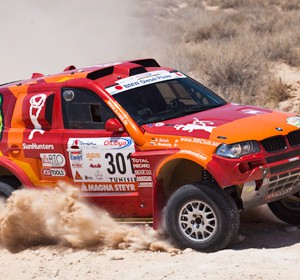