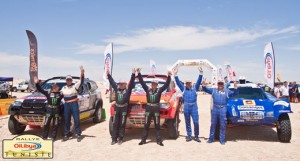 On four wheels, the final victory comes to the duo: Leonid Novitskiy and Andy Schulz (BMW X3CC No. 301) after an intense battle with Jean-Louis Schlesser and Konstantin Zhiltsov’s blue buggy (No. 300), team Roma / Perin (BMW X3CC No. 302) in third.

In 2009, in the stage leading to Nafta, Leonid Novistkiy and his co-pilot Oleg Tyupenkin were victims of an accident. Two years later, the rally Tsar took his revenge on the lot.   It’s as the winner that he was hoisted for the first time on the top step of the Oilibya Rally of Tunisia 2011’ podium after a very intense week. An almost perfect ten for the driver From Moscow whose progress in the space of a few months, has been totally amazing behind the wheel of his official BMW X3 with the incredible talent of his co pilot the German Andy Schulz. Novitskiy has managed to keep the lead in front of the famous Jean -Louis Schlesser and Konstantin Zhiltsov (Buggy Schlesser No. 300) and finally put his name in the history book of this event that he so enjoys. Winner of the day’s stage, Nani Roma and Michel Perin (BMW X3CC No. 302) complete a final podium, really worthy of the second round of the FIA World Cup for Cross Country Rallies. Just as regular as the leaders, but perhaps lacking some experience in Africa: Czechs Miroslav Zapletal and Tomas Ourednicek (BMW X3 CCNo 307) allow the Bavarian car maker to place three of its X3 in the top 5 . A quintet completed by Italian Robert Tonetti and teammate Belgian Fabian Lurquin (Nissan Pathfinder No. 305) who found the right rhythm driving his new car.

WILDCAT TROPHY: MICHEL VISY HITS THE MARK
Seventh in the overall rankings, Michel Visy and Sébastien Delaunay (QT Wildcat No. 315) also captured a victory in this first meeting of the Wildcat Trophy 2011. The pilot of the Cantal region in France beat his friends Gaëtan Ge and Annie Gavineau (No. 320), Christophe Guillot and Jean-Pierre Garcin and Eugene and Patrick Decré Antoniolli (No. 306).

JACINTO 4 OUT OF 4…
And if the Russian Ilya Kuznetsov, and Roman Elagin (Toyota No. 310) win in the T2 category reserved for production vehicles, the Portuguese Elisabete Jacinto (with the Belgian Charly Gotlib and his compatriot Maroc Cochinho) claimed their fourth win in as many outings since the Oilibya Rally of Tunisia 2010 and nobody seems be able to stop them… 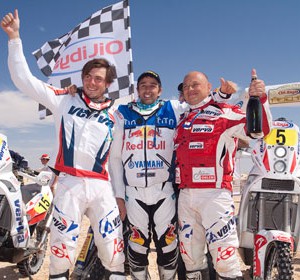 It is in the magical setting of the dunes of Nafta, a stone throw from the film set of Star Wars, that the Oilibya Rally...
Copyright 2011-2016 Rallyraid.net - RISE Network. All Right Reserved.
Back to top