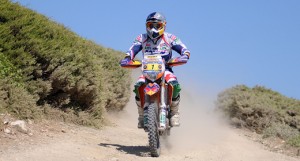 The first stage of the Sardegna Rally Race, that all the competitors regard as a warm up, lived up to its reputation. The 71 riders, 60 bikes and 11 quads, left Millionaires Marina in Porto Cervo to reach Porto Conte, 330 kilometres away, next to Alghero. Two specials were on the menu: the first of 76 kms and the second just 65 kms, but with a lot of navigation in the forest.

Starting first, the winner of the 2010 edition, Marc Coma, aboard his KTM 450, left ahead of his eternal rival Cyril Despres. The Spaniard opened the piste, over 115 kilometres of liason before attacking the times sections. Finally Marc won both specials of the first day to take the overall lead. Behind him, and starting in 15th place, due to being entered in the open class, Cyril Despres had one small crash and a navigation error, which conspired to push him down to second place, 2 mn 25 behind the leader. 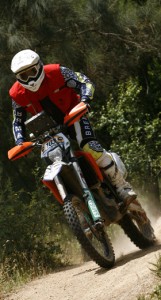 Andrea Mancini (Husqvarna) takes the third place at the end of the first of five days racing. Ruben Faria (KTM 530), Despres’s team mate and the Spaniard Jordi Viladomns on his Yamaha 450, complete the top 5.

Current leader of the World Championship, Helder Rodrigues, leads Luca Manca, the Italian seriously injured on the 2010 Dakar, who is making a steady comeback after long months of convalesce. Before starting the rallye de Sardaigne, Luca took part in two regional events. Today he finishes 2nd in ES2 and 7th overall.

Stephane Peterhansel returns to his first love aboard his ‘little’ 250 Yamaha. The holder of the record number of Dakar victories (6 on bikes) Stephane crashed at low speed, breaking his trip cable, to finally finish 13th. Cyril Neveu (Beta), with 5 Dakar victories, is 34th his evening, while Andrea Mayer (Yamaha 250 ) is 30th. 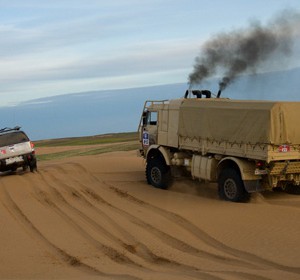 With a month and a half to go until the race kicks off in Moscow, over 100 drivers have already signed up for the Silk Way Rally....
Copyright 2011-2016 Rallyraid.net - RISE Network. All Right Reserved.
Back to top