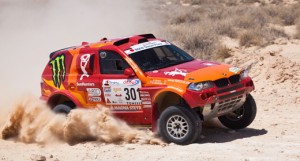 The Monster Energy X-raid team duo of defending FIA World Cup champion Leonid Novitskiy and his German co-driver Andreas Schulz confirmed a superb victory in the Tunisia Rally, round three of the FIA World Cup for off-road rallies, on Friday evening. The Russian won two of the event’s five special stages on his way to a 14m 21s victory over two-time Dakar winner Jean-Louis Schlesser. Noivitskiy’s success was his first in Tunisia and enabled him to extend his overall lead in the 2011 FIA World Cup.

Spaniard Joan ‘Nani’ Roma returned to the Monster Energy X-raid team with French co-driver Michel Périn and finished in third position in a second BMW X3 CC. The duo lost time in soft sand on the third stage and, despite winning two of the desert stages, they had to settle for the final podium position.

Chilean Boris Garafulic enjoyed his debut with the X-raid team alongside co-driver Laurent Lichtleuchter and finished the punishing North African event in sixth position in the third BMW X3 CC.

“Leonid has finally managed his first victory of 2011 and this is great,” said Monster Energy X-raid team manager Sven Quandt. “Nani is back in the team after a year and has settled in quickly. Like Boris, who has shown a very good performance without having a previous test before this rally.” 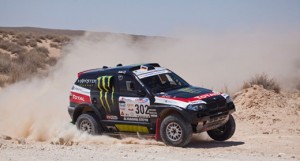 The Monster Energy X-raid teams won four of the five special stages in a dominant display, which began with Novitskiy taking the outright lead on the first 263km section between Tozeur and Ksar Ghilane. The Russian immediately moved into a 1m 43s overall lead over Schlesser. Roma slotted into third and Garafulic was sixth. The second section in the Ksar Ghilane area was cancelled because of violent winds and shifting sands and Novitskiy was first on the road into the third stage south of Ksar Ghilane. Schlesser managed to set the fastest time through the treacherous sand dunes and sneaked into a slender 30s overall lead, despite both drivers passing each other on occasions and losing time in the soft sand.

Roma lost his chance of taking victory when his BMW X3 CC jumped high over a crest and landed heavily in a sand bowl. It took the Spaniard and his French co-driver over 40 minutes to dig the car out of the hole, but he maintained third position in the overall rankings. Garafulic stopped to assist his team- mate and was also delayed in the sand: the Chilean recorded the fifth fastest time and retained sixth position. The 219km fourth selective section between Ksar Ghilane and Ras El Oued was crucial and Roma bounced back to form with the fastest time of 1h 57m 13s to consolidate his third position. Novitskiy beat Schlesser by 1m 50s to retake the overall lead by a margin of 1m 10s. Garafulic set the sixth quickest time and retained a similar position in the rankings. 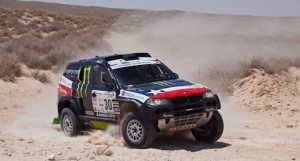 Novitskiy comfortably won the 295km fifth section between Ras El Oued and Tozeur, the Russian beating Roma by 2m 24s to extend his overall advantage over Schlesser to 13m 23s with one punishing day remaining in the Tunisian desert. Garafulic set the fourth quickest time. It was Roma’s turn to set the fastest time on the sixth special stage out of Tozeur and the Spaniard beat Novitskiy by 1m 16s, as the Russian extended his overall lead over Schlesser by a further 48s to confirm his first win in Tunisia. Garafulic was sixth quickest in the third of the X-raid BMW X3 CCs to seal sixth position. 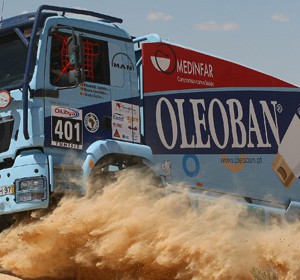