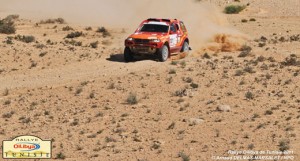 Back to Tozeur for the 5th and penultimate stage of the Oilibya Rallye of Tunisia, the longest of the 2011 edition. In order: mountain tracks, fast and rocky tracks in the plains, and then some sand dunes to finish at the gates of the small isolated town of Douz. Without even waiting for the final explanation, tomorrow in the erg of Nafta, the leaders took the opportunity to roar ahead. Tomorrow, in the weird and magical site of the movie “Star Wars”, it will be the Russian Leonid Novitsky (BMW X3CC No. 301) who will start from pole position for the Desert Grand Prix …

NOVITSKY HAS A SOLID LEAD
Inseparable from the start, five days in, Jean-Louis Schlesser (Buggy Schlesser No. 300) and Leonid Novitsky (BMW X3CC No. 301) knew that the return to the famous Chott El Jerrid would be decisive. The Russian driver left in 2nd position, just behind his teammate Nani Roma (No. 302). By the time they were 50 kilometres from the finish line they had joined up. Roma then perfectly covered the rear of his leader! Jean-Louis Schlesser (Buggy Schlesser) knew things were getting tricky, worse was to come: the car fell victim to an alternator failure, the six-time winner of the Oilibya Rally of Tunisia, conceded even more time to his main rival.
Boris Garafulic (BMW X3CC No. 303) and Roberto Tonetti (Nissan Pathfinder No. 305), both are more and more comfortable with their new engines.

Leonid Novitsky (Rus / BMW X3 No. 301) : “Maximum attack! Such were the orders of the day. We have not had the slightest concern in this beautiful and extremely varied landscape. Riding with Nani behind us on the last 50 kms, was very comforting for Andy and me. I would also like to thank my teammates for their team work … “

Nani Roma (Spa / BMW X3CC No. 302) : “Another great race. There was a bit of everything today! Very technical, intense steering and multiple dune crossing. Our orders were to support Andy and Leonid. That’s what we did, even though I was somewhat surprised to see them only 50 km from the finish. In the end, I let him go and I saw that I could catch up rather easily. This is a sign that I have the car well in hand and that working with Michel Perin works perfectly … “

Jean-Louis Schlesser (Fra / Buggy Schlesser No. 300) : “On this type of stage, we lack power compared to the larger diesel engines of our opponents. The regulation goes against us. We know, everybody knows about it, but nobody does anything to change it! And it’s not the alternator failure at the end of the stage that changed much… “ 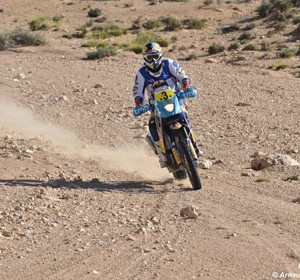 Cloistered in a silence filled with concern and respect for his friend Chaleco Lopes, who suffered a heavy...
Copyright 2011-2016 Rallyraid.net - RISE Network. All Right Reserved.
Back to top