Novitsky-Schlesser: Duel in the sun! Let the battle begin… 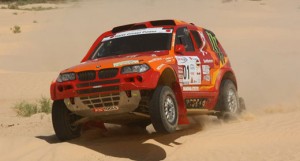 Two hundred kilometers of a tight, almost side by side race between: Jean-Louis Schlesser (Buggy Schlesser No. 300) and Leonid Novitsky (BMW X3CC No. 301). As he left just behind the ‘Boss’, the Russian pilot was able to use all the maneuverability and power of his beautiful Bavarian mechanics, but also the expertise of his co pilot, the German Andy Schulz to overtake the blue buggy twice. Stung, the “sorcerer from Nice”, made a point of honor to get back in the lead before the finish, unfortunately the stage victory went to his opponent … At just one minute behind two leaders, the Spaniard Nani Roma (BMW X3CC No. 302), ably assisted by Michel Perin played it cool and prudent on this first leg … The duo from the Czech Republic : Zapletal / Ourednicek on their private BMW X3CC (No. 307) and the Italian-Belgian pair :Tonetti / Lurquin (Nissan No. 305), completed the top 5 of the day, Just outside of the top five: the Chilean Garafulic (BMW X3CC No. 303) due to a double puncture and stuck in sand. In the T2 category, reserved for production cars, the Russian Ilya Kuznetsov (Toyota No. 310) dominates the race he even had time to give a helping hand to two other crews. 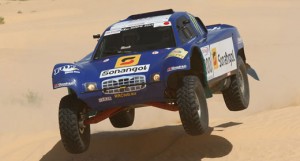 Trucks: the Portuguese lady, Elisabete Jacinto and her splendid sky blue MAN is at the top end of the first difficult step. And to think that the organizers promise a race still more difficult tomorrow for the second stage, a loop south of Ksar Ghilane. This promises to be exiting !

Leonid Novitsky (Rus / BMW X3 CC # 301) : “It was a very intense first step. We overtook Schlesser twice and we maintained the lead to the finish. Start at the top tomorrow??does not scare me in the least! “

Jean-Louis Schlesser (Fra / Buggy Schlesser No. 300) : “Hot, very hot, from the outset. We had lots of fights with Leonid. But this rally has just begun and it promises be very tight. “

Nani Roma (Spa / BMW X3CC No. 302) : “I really did not want to take any risks today. It’s been a year since I last drove this car. The first portion was really fast and bumpy. Then Michael and I started to find the right. rhythm. Frankly, I am pleasantly surprised not to concede a little less than three minutes to the two leading cars. We will continue to gradually increase the pace … “

Miroslav Zapletal (Tch / BMW X3CC No. 307) : “What heat! This is only the second time I drive in Africa and I forgot how navigation is more difficult than elsewhere. But finally we’re doing really quite … “

Checco Tonetti (Ita / Nissan Pathfinder No. 305): “Apart from a nasty sand dune on the first part, all went well. This is the first time I drive this car. It’s real race car! Fabian is great at navigation. “

Elisabete Jacinto (Por / MAN No. 401) : “Usually I’m wary of the first steps, because I often need some time to get into the rhythm. But , I had no choice. It was really awsome! Dunes, navigation, everything !!! idid rather well… 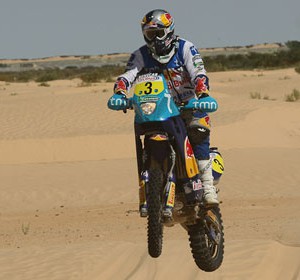 Tracing through263 kilometers between Tozeur and Ksar Ghilane, the first stage of the Oilibya Tunisia Rally 2011...
Copyright 2011-2016 Rallyraid.net - RISE Network. All Right Reserved.
Back to top