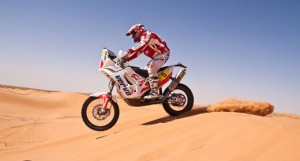 Under a clear blue sky and a blazing sun, the race was back on today, on this, the 30th anniversary of the Oilibya Rally of Tunisia. They left at dawn, six am for the first bike and eighteen minutes past seven for the first car, the competitors had a loop of over 200 km of dunes to swallow on this, de facto, second stage. A special of sand and dunes, considered as one of the best the by organizers. That probably adds more to the joy of Jakub Przygonski (KTM 450 No 15), stage winner in the bike category.

The calm after the storm …the saying was indeed confirmed in Ksar Ghilane today allowing the organizers to open the famous “southern loop” to competitors. All you had to do was to see their faces at the finish line to understand that the day had certainly not been easy. The organization was well advised yesterday to advance starting times to dawn to allow all competitors to finish the stage in the best possible conditions. Knowing that the leaders accomplished the special at speeds well below 60 km per hour, on this route, it was totally justified…

JORDI’S SUFFERING
In the bike category, the image that we all have today is of poor Jordi Viladoms (No. 4), literally exhausted after pushing his Yamaha 450 up to the finish line. A faulty fuel pump leading to excessive fuel consumption, meant that he ran dry 800 meters from the finish line! The young Catalan champion was gutted! A few miles earlier, the former lieutenant to Marc Coma was poised to win the stage. 6th on the starting block….he had made a spectacular comeback and had caught up with the trio of leaders, formed by Helder Rodrigues (Yamaha 450 No. 3), Francisco Lopez (Aprilia 450 No. 1) and Jakub Przygonski (KTM 450 No 15).! Przygonski, started third behind his two opponents and pocketed all the benefits of a stage victory he now leads the overall ranking ahead of Lopez and Rodriguez. Viladoms now 6th overall.
Jacek Czachor (KTM 450 No. 5) is now 4th overall and Marek Dabrowski (KTM 690 No 100 ) takes a proud 5th position in the overall ranking, A good position for the Tunisian Anis Nabli in 7th, Just behind the excellent Manuel Lucchese (Husaberg 450 No. 18).Edoardo Piero Mossi (KTM 450), fared well and is now 2nd in the overall endure cup ranking, Leading the Enduro cup is the Frenchman Thomas Bourgin (Husaberg No. 253).

While many competitors were drawing on their last resources to vent their joy at passing the finish line, Dmitry Pavlov (Honda No. 200) pushed a sigh of relief. Taking advantage of Pascal Delesque’s mechanical problems (Honda No. 260) and Karim Dilou’s health concerns (Yamaha 202), the Russian ogre has largely consolidated his dominance in the overall classification in the quad category.

Jakub Przygonski (Pol / KTM 450 No 15) : “A great special, but very physically demanding. In catching up with Helder and Chaleco, I knew I could win the stage. So I got very motivated. In the end, in the dunes, it was more like a motocross race. Tomorrow I will open the track, this will be an additional experience … ”

Francisco Lopez (Chi / Aprilia 450 No. 1) : “Everything went as I expected. We ganged up, and all I had to do was be careful not to make a mistake. Leaving third tomorrow means I can gain a little time … ”

Helder Rodrigues (Por / Yamaha 450 No. 3) : “I knew that opening the track today really would not be an advantage, but eventually I had fun. I was surprised that we had caught up with Jordi Viladoms. Too bad, he was really unlucky to experience these setbacks right at the end..”

Jordi Viladoms (ESP / Yamaha 450 4) : “I believe that fate is not on my side! After my troubles on Monday, I again had problems with that fuel pump. The bike stopped dead less than one kilometer from the finish. I thought I would die. I was exhausted but still managed to pass the finish line.”

Manuel lucchese, (Ita / 450 Husaberg, No 18) : “It was hard, a lot of dunes, small but cut, no time to breathe! Once in the rhythm of things, it got easier, and the special was not too long so it got better. It’s only my second rally, in Abu Dhabi I finished 13th, so I am hoping to do better here, especially as in Tunisia the scenery is much nicer…”

Kemal Merkit, (Tuk / KTM 450, No 101) : “Yesterday I had a problem with my fuel injection and relied on the team spirit and friendship of the other teams to repair during our day of rest (caused by the sand storm). So today, I had fun on these easy dunes even though I broke a couple of ribs in Abu Dhabi and I am still on painkillers.”

Edouardo piero mossi, (Ita / KTM 450, No 250) : “I haven’t had this much fun in a long time! Great sand and fast on the dunes. I actually live in Morocco and organise raids for tourists, so I feel right at home in the desert. Weighing in at 100 kgs, I am not the lightest of bikers, so I am in the Oilibya Rally of Tunisia to enjoy myself, more than to win it “

Dmitry Pavlov, (Rus, Honda Quad, No 200) : “I enjoyed the day; this was a difficult special for quads. Compared to Abu Dhabi where I came third three weeks ago, Tunisia offers a change of scenery every day. The quad albeit heavy is very reliable.”

Philippe Pages (Fra, Yamaha 450, No 16) : “this special was easier than when I saw the road book last night the sand was fun, I even caught myself looking at the beautiful landscape. The first two specials have honestly been the toughest and yet nicest ones I have done this year. I said to myself that if I make it through the Ksar loops, I’ll get to the end…..”

Tobias Younger and Jago Pickering (Eng, KTM, Nos 254 and 255) : “Today was awesome! Lots of jumping, navigation was fast and furious, great scenery we loved it. For Jago, it is rally number two (we were in Morocco last October), and Tobias is at his third, we enjoy the friendship and team spirited people than come on the NPO rallies. “

Karim Dilou (Tun / Yamaha Quad No. 202): “Before yesterday I had health problems, despite the forced rest day yesterday, I could not recover completely, so I cut short today, in order to rest, I really want to finish the rally you see.” 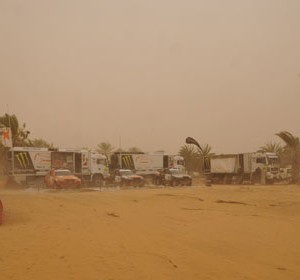 Originally planned over 208 kilometres south of the oasis of Ksar Ghilane, the 2nd stage of the Oilibya Rally of Tunisia...
Copyright 2011-2016 Rallyraid.net - RISE Network. All Right Reserved.
Back to top