Kapuvár will be a mind game…– III. Admiral Rábaköz Cup 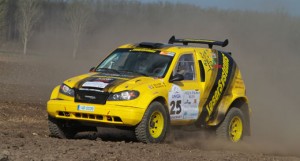 Sólyom Team threw the reconstructed HAWKIA into battle for the first time at the first rally of the season. The debut ended ambiguous: the race car wasn’t hundred percent ready but Olivér Sólyom and Mátyás Galbács still scored points. They finished fifth overall and seventh in their category at the Aqua-Palace Cup and are now preparing for the next round of the Hungarian Championship, Admiral Rábaköz Cup. We asked Olivér Sólyom about this.

Was the reconstruction of the car successful?

Unfortunately we were able to start with the work very late, we had to complete six months’ work in two months and as a result of this we arrived to Hajdúszoboszló with a lot of incompletion. For this reason we made the decision that if we were there we tried to collect some points according to the rules with causing the least possible damage to HAWKIA. Although our happiness wasn’t unclouded, we were content with the successful season opening.

Almost all parts of the car were involved in the reconstruction. The track width has been increased by 16 centimetres, we moved everything possible behind the centre point, and added a special six-gear gearbox. With these modifications the car became very stable and because of the gearbox it became faster.

You got a lot of attacks because of the forfaits. What do you think about this?

Yes, I’ve heard about this. There always were and always will be some people that for some reason don’t like that Sólyom Team exists. To be honest, i don’t care for these opinions because forfait is in conformity with the rules. Those who don’t like what we did act for these rules to be out of the regulations. I didn’t want to misuse this rule but this was the reasonable and cost effective decision. Also in the future we will use all possibilities given by the regulations if it is our interest. Giving up a rally is the last option.

How do you prepare for Admiral Rábaköz Cup?

First of all, we get the HAWKIA hundred percent ready. If we still have time (and I hope we will) I want also to test it a little. It would be great to get used to its changed characteristics and to the new gearbox. Apart from this, we can’t do anything special as preparation, at most we can sleep a little bit more than last time.

On the entry list we can’t see Kitti Csete’s name but there is a German crew under Sólyom Team’s colours. Who are they?

Kitti prepares for her exams, that’s why she can’t start in Kapuvár. As for the German crew, they are Björn and Walter Hrabal who start this year in the group H of the Hungarian Championship as a member of our team. I like them and rely on them, they are persisting and their car is reliable. I hope that they can cause some surprise in their category.

What do you expect in Kapuvár?

I want to finish the rally and grab a good position. As all cars have bigger engines than ours, a fifth place in the Hungarian Championship classification would be great. We can’t race the tracks near Kapuvár from engine power, I think it will be a mind game for us again. 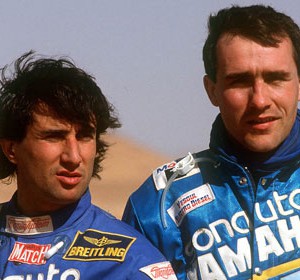 Only a couple of weeks after the fantastic news of the participation of Stéphane Peterhansel at the Sardegna...
Copyright 2011-2016 Rallyraid.net - RISE Network. All Right Reserved.
Back to top