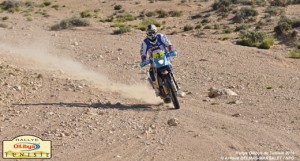 Cloistered in a silence filled with concern and respect for his friend Chaleco Lopes, who suffered a heavy fall yesterday, Helder Rodrigues (Yamaha 450 No 3) came out of his silence today. And in what way! By using all his experience! The Portuguese who started ahead this morning “piloted” the perfect stage. Without looking back, he literally flew over the 300 kilometres of track, swallowing with equal efficiency, the variety on offer today. With more than five minutes ahead at refuelling (at the half way mark) he made sure his advance over Pole Jakub Przygonski (KTM 450 No 15) , would no longer be counted in seconds, but in minutes: eight-minutes to be almost precise. Probably more than enough to enable Rodriguez on Yamaha to obtain his first victory in a final round of the FIM World Championship rallies .So it’s for the last vacant place on the podium in the Oilibya Rally of Tunisia in Nafta, that Jacek Czachor (KTM 450 No. 5) and Jordi Viladoms (Yamaha 450 No. 4) will compete tomorrow . A podium, however, already well established in the Open class where Dabrowski (KTM 690 No.100)) still leads ahead of the Turk Merkit (KTM No. 101) and Tunisia’s Anis Nabli (KTM No. 103).

ENDURO CUP: BOURGIN ON TOP OF THINGS …
Reserved for 100% production motorcycles, the Enduro Cup should no escape from the Frenchman Thomas Bourgin (Husaberg 450 No. 253). With more than three quarters of an hour ahead of Italy’s Manuel Luchese (Husaberg No. 18) he again won the race today in Douz. He carefully avoided making any mistakes, while his opponents apparently met harder times in the longest stage of the rally.

QUAD: DELESQUE IS HAVING FUN
Like a metronome, the Russian Dmitry Pavlov (Honda No 200) continues to combine speed and efficiency, Pascal Delesque (Honda No 261), delayed by various problems since the start of the Oilibya Rally of Tunisia 2011, had very playful fight with the pilot from the east, for a first position. Unfortunately, the Frenchman forgot to focus on his navigation, missing two mandatory waypoints … As for the Tunisian Karim Dilou (Yamaha No 202), still weak, he nevertheless completed the special in “minor mode” together with the Italian Norberto Cangani (Polaris No 203)

Helder Rodrigues (Por / Yamaha No. 3) : “I woke up this morning and decided to go all out! I was reassured about the health of Chaleco and I wanted to strike a major blow. Everything went well. In essence, I saw that Jakub was not in good shape, so I pushed even more at the end. But the Oilibya Rally of Tunisia is not yet over. I need to stay out of trouble tomorrow … “

Jakub Przygonski (Pol / KTM 450 No 15) : “This morning, after a few kilometres, I realized that I was not concentrated enough to achieve something good today. I could not find the right rhythm. Is it something to do with witnessing Chaleco Lopez‘s accident yesterday? I do not know. Still, it is in these situation that i have to gain some experience. Helder, has achieved the perfect stage … “

Jordi Viladoms (ESP / Yamaha 450 No 4) : “Like all riders, I was moved by Lopez’s accident yesterday. I decided to put it at the back of my mind so I could focus on this stage. After problems during the first two days, I made the most of the recent races to continue learning “ 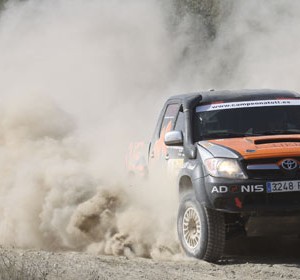 Spain will hold the only rally raid event in Europe with 600 kilometers nonstop against the clock. The place to be is the city...
Copyright 2011-2016 Rallyraid.net - RISE Network. All Right Reserved.
Back to top