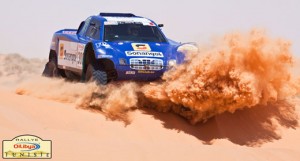 For this second round in the car category, we expected a fight between the BMW X3’s of Novitsky (301) and Roma (302) facing up to the blue buggy of Jean-Louis Schlesser (300). And while the battle did seem to take shape, Nani Roma and Michel Perin had to let go. Their black X3 jumped to high over a dune and ended up in a sand bowl. It took them forty minutes to dig themselves out. As expected the excitement lay in the battle between :Leonid Novitsky and Jean-Louis Schlesser, each overtaking each time and time again, at one point both stranded for a while in the deep sand, but finally it’s Shlesser and Zhiltsov who sign a stunning stage victory and regain the overall lead … just 30 seconds in front of their Russian challenger. Third in today, the Czechs Zapletal and Ourednicek put their privately owned BMW X3 onto the podium and are now tailgating Roma / Périn with just seven minutes, in 4th place overall.

GARAFULIC AND KUZNETSOV: ALWAYS READY TO HELP OUT
Trying as best he could to help his teammate Roma, Boris Garafulic (BMW X3 No. 303) concedes almost an hour and a half, today. As for Italy’s Roberto Tonetti (Nissan Pathfinder), trapped on four occasions in the dunes, he has now lost all the benefits of a perfect first special, In the T2 category, Ilya Kuznetsov (Toyota)…proves that not only can you dominate the category but also be a perfect gentleman, he had no hesitation in stopping to help Ludovic Leloup and Sofiane Driss (Toyota n°318), in trouble at one point.

WILDACT TROPHY: VISY IS LAUGHING, DECREE IS CRYING
Among the sporting achievements of the day let’s acknowledge: Visy Michel and Sébastien Delaunay (QT Wildcat No. 315). The crew from the Cantal region in France defeated Christophe Guillot (QT Wildcat No. 312) literally exhausted and still dealing with fuel feed problems, and took this opportunity to shake up the rankings.Eugenie Decré and Patrick Antoniolli (QT Wildcat) lose big time with a broken axle shaft before …

Finally, while many competitors were reported in difficulty, Elisabete Jacinto, Charly Gotlib and Marco Cochinho (MAN No. 401) leading in the truck category, finally crossed the finishing line after more than 6 hours of agony.
Work it out for yourself: 200 kilometers, six hours, that works out at an average time of … 30 km / h!
INTERVIEWS

Jean-Louis Schlesser (Fra / Buggy Schlesser No. 300) : “What rhythm! We had to concentrate to keep up with Novitsky. Not easy because the ground was not fast. I won this stage and I’m leading in the overall, but we must remain feet on the ground. The BMW is more powerful and it will be very difficult to keep that advantage “

Leonid Novitsky (Rus / BMW X3CC No. 301) : “It was very intense with Jean-Louis today. We got stuck twice, but fortunately we did not lose too much time. It will not make any mistakes in the days to come … ”

Nani Roma (Spa / BMW X3CC No. 302) : “We had overtaken Jean-Louis and we were behind Leonid when our car fell into a hole. It took almost 40 minutes to get out. That’s racing … Too bad because we had a good shot to play today. On a rally this short, I fear that we will not be able to claim a final victory. ”

Boris Garafulic (Chi / BMW X3CC No. 303) : “We stopped to help Nani, and then we got stuck just after that! Which made us loose time, this stage was very difficult, but I am gradually getting used to my new car ”

Ilya Kuznetsov (Rus / Toyota No. 310) : “Given the weight of my car, I was not at an advantage today. Actually I’d say it was an ordeal. I hope it’s another terrain for tomorrow, I’m exhausted … ”

Michel Visy (Fra / QT Wildcat No. 315) : “Following last night’s briefing by Stéphane Clair , we fully focused on the road book: the result was a flawless special that allows us to achieve a good result in our class! ”

Roberto Tonetti (Ita / Nisan Pathfinder No. 305) : “We got stuck four times today! Costing us over an hour and a half It’s a special to forget as quickly as possible …” 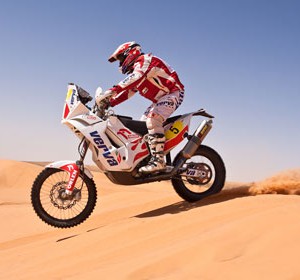 Under a clear blue sky and a blazing sun, the race was back on today, on this, the 30th anniversary of the Oilibya Rally...
Copyright 2011-2016 Rallyraid.net - RISE Network. All Right Reserved.
Back to top