Stéphane Henrard: “I cannot wait to be there” 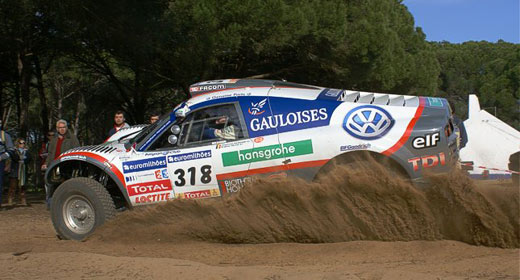 After many ups and downs, Stéphane Henrard is back in the rally raid world with his fighting spirit burning fiercer than ever. The 46-year-old Belgian will be assisting Yves Fromont and Patrick Martin, two of the customers who bought his Tarek buggies. The Silk Way will be a test bed for the system as a whole, which will also include Henrard’s own buggy, an upgraded Tarek. His sights are firmly set on winning the two-wheel drive category.

After counting on Volkswagen Belgium’s support during his entire career, the driver from Brussels finally lost his sponsors after the 2010 Dakar. This year, the many-time-winner of the Dakar in the two-wheel drive category garnered fresh support and immediately registered for the Silk Way. “I cannot wait to get to Moscow. Russia is a country which fascinates me. I have a great deal of admiration for this people, its culture and its extraordinary history. I am really looking forward to get to know all this from up close”, says an excited Stéphane Henrard. “Besides, I have been told that the Silk Way is the best possible place to prepare the Dakar. This race has all the terrains typical of rally raids on the menu: rolling routes, rough stretches, sand and artful driving. It is perfect for my customers, who will come face-to-face with everything rally raids have in store for them. It is an ideal situation, since our Tareks are extremely reliable, but our two drivers Yves Fromont and Patrick Martin, who arrived from Bowler, will be driving our buggies for the first time.”

“On another note, there are no motorbikes in this race, which is great for those who are familiarising themselves with a new machine. Although I used to be a motorbike rider, I must admit that shifting to a much higher performance car removes a burden from your shoulders. They will be able to focus on their pace. It is important that they take time to acquire automatic reflexes and discern the limits of the machines they are driving. I have tried to make them well aware of this. I think they are somewhat more responsible, since they also are the owners.

“As for me, I will be driving my own Tarek. It is equipped with the same 3-litre V6 TDI transmission block as the two factory prototypes, but this is an upgrade upon which we have worked a lot on weight reduction and mass redistribution, as well as the suspensions and running gears. My basic objective is to challenge for victory in the two-wheel drive category, but competing with the factory 4x4s is a pipe dream. That being said, I like to take part in a fair competition, of which the two-wheel drive category, with its ever increasing number of talented buggy drivers, is a perfect example. No, seriously, I cannot wait to be there!”

Roma wins the scracht and Novitskiy remains top of the overall. 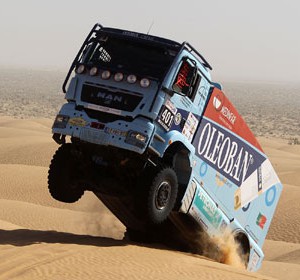 Though the course was extremely difficult for trucks, Elisabete Jacinto was very successful in today’s streak from...
Copyright 2011-2016 Rallyraid.net - RISE Network. All Right Reserved.
Back to top