The east is rising… 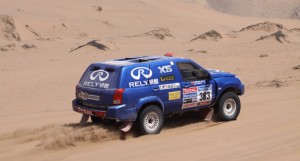 The Dakar World Tour called in on Beijing for its last stage, where Jean-Etienne Amaury, Chairman of ASO, and Etienne Lavigne, Director of the Dakar, couldn’t help but notice that the rally’s Chinese pioneers have given rise to great enthusiasm.

The time when Chinese competitors were first and foremost seen on the Dakar as participants from the more exotic climes, simply adding to the long list of nationalities represented, is a long way back in the race’s history. In 2004, when Lu Ningjun became the first Chinese competitor to cross the finish line in 57th position, with experienced co-pilot Denis Schurger, nobody genuinely realised that he had opened a door to others. Since then, approximately twenty riders or crews have tasted the adventure with varying success, constructors have been persevering in the rally-raid discipline, both in the car and bike category, and the list of pretenders who boldly proclaim their desire to cross the finishing line increases each year. They were all present this morning for the presentation given opposite the Bird’s Nest, the Olympic stadium build for the 2008 games. Once again Etienne Lavigne met with participants who will be taking starter’s orders for the beginning of the 2012 edition of the Dakar. Without a doubt, Yong Zhou will be there. Having finished in 22nd position behind the wheel of a Great Wall 4×4, he boast’s his country’s best performance with his 19th place in 2005. Jincheng bikes will also be in attendance, after the positive results posted by Wenmin Su, 70th in Buenos Aires. Now that they have shown the way, they will surely be imitated by many brave pretenders, who will be able to rely on the spotlight focused on them by the Chinese journalists. Forty media organisations were represented this morning, such as the giant of the web sohu.com, national broadcaster CCTV or the sports daily newspaper Titan Sports, the country’s references in their respective domains. 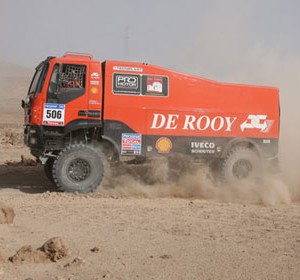 In order to give itself the utmost chance of competing with the Kamaz trucks, both on the Dakar and the next Silk Way Rally,...
Copyright 2011-2016 Rallyraid.net - RISE Network. All Right Reserved.
Back to top