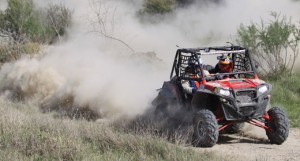 After having missed out on a Volkswagen contract, Thierry Magnaldi left the rally world for two seasons. However the former biker is back for the Silk Way Rally with a new challenge, that of developing a small Polaris series vehicle and bringing it to the forefront of the new T3 light category. Headed by Marco Piana and his team, with the support of the ATV specialist, this project’s admitted goal is “to open a new door to the rally raid world at a lower cost.”

“The original idea was simple,” explains Marco Piana, “since I had already been in charge of ATVs for Polaris for four years, we decided to extend our partnership to offer a series production vehicle to those competitors who wanted to discover the rally raid at a lower cost, and on which there would only be one competition kit to install to get a true race car, all for about 60,000 Euros. In short, we wanted to develop an assistance service project similar to what KTM is doing with motorcycles for amateurs. They buy a vehicle and a kit, then if needed, additional parts from the maker’s assistance truck present at the bivouac. And Polaris decided to base this concept on their RZR 900 model which is a small all-wheel drive buggy with a 900-cm3 engine…

“Created to be off-road from the start, 100,000 of these vehicles have already been manufactured and the model has already competed in many bajas in the US,” specifies Marco Piana, “so we know the foundation is good. Now we’d like to develop our kit and this frame specifically for the Dakar, that’s why I called Thierry. I wanted to make sure that the possible issues we’d come across would come from the car, not from the driver, and I was looking for a good biker with buggy experience, and since Thierry wanted to come back…”

“I’ve always dreamed of racing the Dakar alone in a buggy, so I didn’t have to think about this too long,” adds Thierry Magnaldi. “When Marco started telling me about this project, I jumped on it, especially with the official support of Polaris which allowed me to be committed for two seasons. I haven’t taken the wheel yet, but the vehicle looks like fun for it is neither an ATV, nor a motorcycle, nor a car, but a little of all three in one.”

“It’s obviously not a vehicle for a win on scratch performance, but in our T3 light category, we have real potential, especially since I’ve decided to race alone in the buggy to improve our performance, even though it’s built for two bucket seats. It allows us to gain about 200 pounds, which represents about 10% of the total weight and with 100 horsepower that is not negligible in terms of performance. The goal of this first race, the Silk Way, will be first and foremost to finish to have a look at everything. However I will push the mechanics of it to its limits and launch an effective development. I may be coming back though the back door, but who knows, I plan on making some waves!” 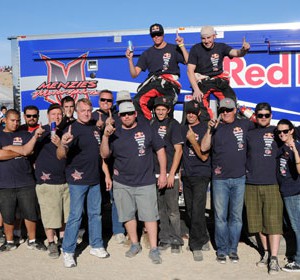