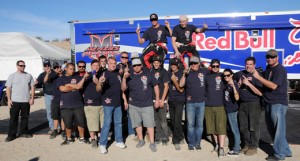 Round 3 of the five-race 2011 SCORE Desert Series, the World’s Foremost Desert Racing Series saw 254 starters competing in 28 Pro and 7 Sportsman classes for cars, trucks, motorcycles and ATVs, Saturday and Sunday in Ensenada, Mexico. SCORE is in its 38th year as the world’s foremost desert racing organization.

Entries came from 30 U.S. States from Hawaii to New York and the U.S. Territory of Guam along with the additional countries of Mexico, Canada, Finland, Germany, Guatemala Italy and Japan.

With racing continuing in the elapsed-time race that had a 23-hour time limit until 10:20 a.m. Pacific Time Sunday, both the start and the finish line were located in the heart of Ensenada, Mexico on Boulevard Costero adjacent to the historic Riviera del Pacifico Cultural Center. It was the fourth straight year that both the pre-race activities and the finish were all held on this historic boulevard. SCORE officials released the official results following complete data tracking review Sunday morning after the course closed.

The total number of starters (254) was tied for the 24th highest total with 1991 in the 43-year history of the popular race. The starting list included 160 cars and trucks and 94 motorcycles and ATVs. The total of 160 finishers is the 14th-most number finishers in the event’s 43-year history, for a tremendous 62.99 percent finishing rate.

Johnny Campbell Racing gave American Honda the top two overall motorcycle finishing positions as Kendall Norman, Santa Barbara, Calif. and Quinn Cody gave Honda its 16th overall motorcycle victory in the Tecate SCORE Baja 500 and 15th straight title with their winning time of 8:47:07 at 51.76 mph on a JCR Honda CRF450X. After data tracking review was completed in the elapsed-time race, they beat the twin Honda CRF450X of teammates defeated teammates Colton Udall, San Clemente, Calif., and Dave Kamo, Caldwell Idaho, by exactly 10 minutes as Udall/Kamo received time penalties for violations. Their times were the fastest of all vehicles on the course.

It was the second straight overall Tecate SCORE Baja 500 race win for Norman and Cody. Norman now has five career race wins in this event in the last six years. It was the second triumph for Cody. Udall was teamed with Kamo for the first time as Johnny Campbell Racing dedicated the race to the memory of Udall’s former teammate Jeff Kargola, who died recently following a motorcycle riding accident in Baja. In Saturday’s race, the two JCR Honda vehicles actually crossed the finish line together, before Norman/Cody were declared official winners on Sunday morning. Udall and Norman were on their respective bikes at the finish.

Finishing fourth overall and in SCORE Trophy-Truck was Nick Vanderwey, Phoenix/Curt LeDuc, Cherry Valley, Calif., with a time of 9:25:09 in the No. 84 Flying Dutchmen Racing Chevy Silverado.

Completing the top five overall 4-wheel vehicles and fifth in SCORE Trophy-Truck was the brother team of Gary and Mark Weyhrich, Troutedale, Oregon, with a time of 9:26:59 in their No. 98 TSCO Motorsports Ford F-150. 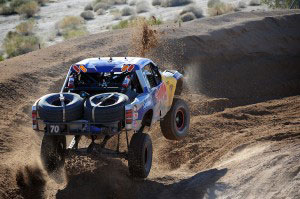 In his rookie season racing with SCORE, Menzies, 23, opened the season by winning the SCORE Laughlin Desert Challenge in January and backed that up with a sixth-place finish in March’s MasterCraft Safety Tecate SCORE San Felipe 250 before his second SCORE Trophy-Truck victory Saturday. His first SCORE race was last year’s Tecate SCORE Baja 500 where he finished seventh.

“The crew did an awesome job,” commented Menzies after the race. “Every time I was in the pit it was just 30 or 40 seconds. When I got up to Borrego I made one mistake and hit a huge rock and we thought we broke a caliper off the truck but we stopped and checked it out. It was good so we kept going. Our goal is to win the championship this year.”

“This win gives us a huge jump on the points. I didn’t have one flat all day long. Not bent rims, no nothing. I was down here pre-running for close to two weeks so I think that paid off huge. I couldn’t be happier than I am right now. We’ve been doing a lot of testing with the truck and it is showing. The summit was real rocky but we just cruised over it and got to Borrego and let it fly from there.”

Menzies’ win was also the 28th overall 4-wheel victory win in this race for BFGoodrich Tires. He defeating an impressive field of 28 starters Saturday in the marquee SCORE Trophy-Truck division for high-tech, 850-horsepower unlimited production trucks. 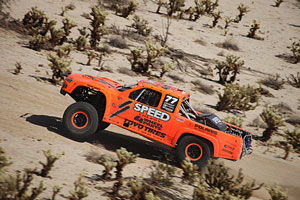 Tenth overall among 4-wheel vehicles and eighth in SCORE Trophy-Truck was NASCAR Cup team owner/driver Robby Gordon, Charlotte, N. C. in the No. 77 Robby Gordon Motorsports Hummer H3. Gordon’s vehicle was his Dakar Rally truck it was the first time he drove it in a SCORE race while his normal desert truck is a Chevy CK1500.

Justin Matney, Bristol, Tenn., and Clyde Stacy, Bristol, Va., continued their stellar seasons Saturday. Matney won Class 8 in a Chevy Silverado for the second time this season and Class 11 in a stock VW Sedan for the second time as well in three races. Stacy remained undefeated with his third straight victory in Class 4 in a PSD-Chevy and also finished 18th in SCORE Trophy-Truck in a Chevy Silverado.

Luke McMillin and Salgado are defending season point champion in their respective classes and won for the first time this season. For Matney and Bevly, it their second class wins of the year.

It was the second win of the year for Udall, Dizney, Lewis and Brown.

The rugged 452.84-mile course was a very similar to the last three years, although it is about 14 miles longer and the terrain has changed because of natural weather patterns that impact both sides of the race course on the Pacific Ocean and the Sea of Cortez and in the middle in the summit section. The course, which runs in a clockwise direction, resembled a deflating balloon, winding east to Ojos Negros, down to near San Felipe, back West to the Pacific Ocean below San Vicente and back north east through Santo Tomas on the way back to Ojos Negros and then Ensenada.

In addition to season class point championships, the racers also competed for part of the nearly $400,000 in cash purse and contingency postings each race. Drivers in the Pro car and truck classes are attempting to earn prestigious SCORE Toyota Milestone Awards given to all car and truck class drivers who complete every required mile of the five-race season. Being presented by Toyota Motorsports for the 26th consecutive year, a total of 31 drivers remain eligible after Round 3 of the 2011 SCORE Desert Series. Racers also competed for the annual SCORE Off-Roadsman of the Year awards, including the MasterCraft Safety SCORE Rookie of the Year award.

While Tecate is title sponsor of the 43rd Tecate SCORE Baja 500, additional race sponsors were the Office of the Secretary of Tourism of Baja California and ProTurismo de Ensenada. 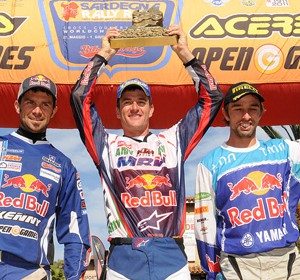