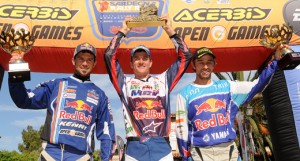 Marc Coma, 2010 winner, signs a new victory in this 4th edition of Sardinia Rally Race. After five legs and six special stage wins, the Spaniard finishes his performance 4’ 15” 81 above all other competitors. The gap was slightly diminished during this last day of the race (over 6 minutes yesterday) as the Spanish rider took the last two timed sections with calm.

After the beginning of the year, Coma goes success after success: Dakar, Abu Dhabi Desert Challenge and now Sardinia, and his character doesn´t change an inch! Over the podium, accompanied by Cyril Despres, his KTM colleague, all eyes are on the handshake of the two. On the third position, Helder Rodrigues (Yamaha 450) was quite released, the menace of Stephane Peterhansel stood away from the podium. For a small difference, but after a problem on his trip during the first leg, the official BMW X-Raid rider had the third place at his hand. He stepped out of his lack of competition on two wheels with courage and dignity. His thirteen years of absence on the bike were not felt during the five legs of the race.

Paolo Ceci (Beta 450), first Italian, finishes 5th overall. Ceci gave a great fight, but just like Rodrigues, they lost time riding too fast on the technical roads on the forest. On his side, Jakub Przygonski saved the honor of Team Orlen in the 6th place overall. Jacek Czachor is 14th and Marek Dabrwoski 17th. Matteo Graziani, who made an exceptional performance at the beginning of the race, lost many places on the ranking due to successive “gardening” episodes. He took the 7th position overall in front of Portuguese rider Ruben Faria (KTM 530), last stage´s winner.

QUAD: Dunernay´s triumph!
There were 11 quads at the start and only 9 crossed the finish line. The quad´s tribe gave it all in the sinuous and technical roads of the rally. Laurent Duvernay (Honda 700) got the victory over one of the masters of the discipline, Russian rider Dimitry Pavlov (Honda 684) at 40´572”07. Meanwhile Mauro Almeida (Yamaha 700) installed himself in the third place overall. The two outstanding ladies of the competition, Camelia Liparoti (Yamaha 700) and Claude Vincent (Yamaha 550), both crossed the finish line! 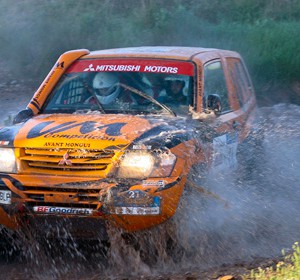 The longest single day race in Europe was the Baja Tierras del Cid and was disputed the last Sunday in Lerma in the province...
Copyright 2011-2016 Rallyraid.net - RISE Network. All Right Reserved.
Back to top