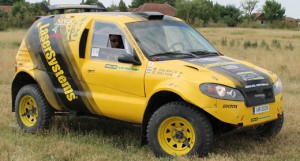 It turned out at the team’s test two weeks ago that there is some problem with the side gear of the HAWKIA. As it was found out later, the gearbox broke down. Because of a fault of material in the second gear a cog broke down and four others followed it. It is a luck in the unluck that it turned out in Hungary and not in Greece.

On the island of Evia Evia Rally will be organised for the fifth time this year, which is also the second round out of the four of the inaugural Balkan Cross-Country Rally Championship organised in Albanian-Greek-Bulgarian cooperation. The full race distance is 950-1000 km out of which 700-750 km is against the clock. According to the entries received so far, a large field can be expected: two weeks before the rally there are 50 bikes, 22 quads, 6 buggies and 29 cars on the entry list, 107 vehicles altogether.

Olivér Sólyom: “Maybe the Albanian-Greek-Bulgarian championship is not the strongest but Evia Rally promises to be a very good race. I prefer to drive in the Mediterranean environment or on coastal tracks than near cornfields. Moreover, the atmosphere and attitude is completely different, the atmosphere without animosity will have beneficial effect on the team.

The car will be ready on time, the service team repaired all known problems, now we are only waiting for the parts of the gearbox. I hope I can test the car before leaving for Greece. What we can achieve at the Evia Rally will turn out only there. We don’t go to win – but still we do! Our Greek friends can be sure that we won’t lay down arms easily. Some local acquaintances warned us to start off in a cautious way as the stony parts of the river beds can cause nasty surprises. I’ll try to rush keeping this in mind. What will be quite unusual for us is the 120 km long night special on Friday towards which I have mixed feelings but I am looking forward to be there finally!” 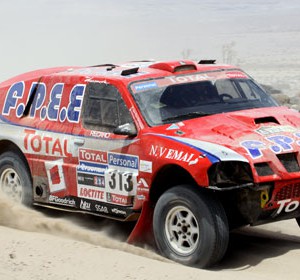 Frustrated at not having driven since the last Dakar, which he finished in a fine 10th position, Christian Lavieille has taken...
Copyright 2011-2016 Rallyraid.net - RISE Network. All Right Reserved.
Back to top