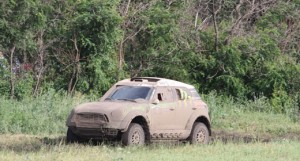 The first stage of the race has broken all bets made last night, the seven times Dakar winner Stéphane Peterhansel has suffered electronical problems in the new MINI at kilometer 43 of the stage and lost about two hours and a half end of the stage. Mini’s driver has left the way clear for his rivals. The fastest at CP2 are the Russian pilot Zheludov followed by Briskindov withseven minutes fifty-one seconds more, only four fewer than the Ukrainian Nesterchuck.

In the CP3 pilots of the G-Force Team improved their performance and Bogdan Novitskiy was second with less than seven minutes to Zheludov, followed by Polish Holowczyk with the BMW X- Raid and the Opel Antara of the Hungarian Balazs Szalay. Boris Gadasin recovered seven positions and stood fifth in CP4.

At the end of the stage the rain has surprised everyone at the bivouac and has flooded several areas of the same cars that were already muddy throughout the period have not noticed the sudden change in weather. The Zheludov Nissan has won the stage ahead of a surprising Holowczyck and Bogdan Novitsky, followed by Boris Gadasin that after completing the stage told us “the stage has been hard not only bad weather we have been complicated a little tour “. The Start of this year’s race seems calmer than last year. “Well, this year is different, last year we wanted to prove with Volkswagen and this year we intend to finish the rally. I have a new co-driver and need to adapt, today we had some problems with interpretation of the road book, but we are very happy with our positions as they are a good place to start tomorrow. 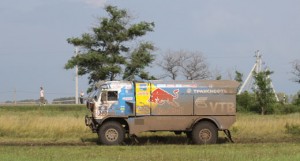 The truck category has been a Kamaz Show, Nicolaev signed a sensational stage with the second time scracht surpassing even Holowczyk time. The rest of the team’s drivers have covered the top five with Kabirov, Ardavitchus, Karginov and Mardev. Loprais with the new Tatra only reached the sixt overall. The famous Team De Rooy has suffered damage pathways that have deprived them of a better situation in the table. Hans Stacey has suffered a blowout and the wheel is on fire with what they had to put out the fire and replace the tire. Jo Adua in the second truck have broken the air duct and repair it on the track has made them lose nearly fifty minutes. 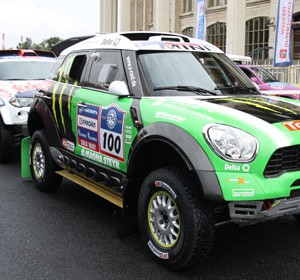 Pep Cifre, Moskow (Russia)._ The third edition of the Silk Way Rally is ready to start. All the teams have passed the scrutienering...
Copyright 2011-2016 Rallyraid.net - RISE Network. All Right Reserved.
Back to top