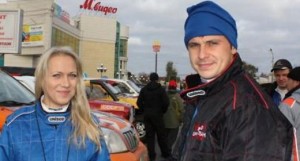 Interview by Robb Pritchard (Russia)._ Even well into the 21st century women in motorsport are still a novelty. Names like Mouton, Aitkin-Walker and Klienschmidt will be forever immortalised in the history books, but as women who have won in top-flight motorsport, they are on a very short list. Women who have won championships though are even rarer, and so when I met Alina Sergeeva in a caravan serving as the HQ for a trial event called Kirovski Balota, the first round of the Russian Off-Road Championship, I just had to ask her some questions for Rallyraid.net!

The woods are preternaturally quiet. The pine needle covered ground is still scarred with bomb craters from a savage WW2 battle that raged around the besieged city of St Petersburg, but it’s quite now as all the teams are out in the nearby wilderness trying to drag their vehicles to the scattered waypoints on the course. The event is organised by two-time FIA World Cup for Cross Country Baja winner, and director of the popular G-Force Rally-Raid team, Boris Gadasin and the drivers claim that it is the country’s hardest… and certainly by the faces of the shattered co-drivers as they stagger in one by one the to drop off their paperwork I can easily believe it. It’s Alina’s job to check through their photo collections proving that they’d managed to winch to all the points, so it is a long time before I get the chance to interview her… and then when we get a moment she blushes and tries to dismiss me by suggesting I go and interview someone more worthy, like Boris, instead. Not only is she young, 22, stunningly beautiful and a champion, she is also incredibly modest. A very rare person indeed!

So, I am talking to the Russian Rally Raid Champion!

“Actually, no,” she smiles shyly, pushing a lock of long blonde hair behind her ear. “In Russia there is a full Rally-Raid Championship but there is also a Cup as well, which is a little easier. Maybe there is 2 days racing instead of 3 for example, so it’s easier on the car, it costs a little less to run the car, there’s less kilometres so it’s a bit cheaper to maintain the car etc. But still the racing is just as fast and just as close. We entered this in a UAZ so we could get a greater understanding of everything, the set-up, stages, what is expected of each member of the team etc… and in the end we won it.”

(An UAZ is a rather humorously outdated Russian 4×4 mass produced for the military in Soviet times, when numbers were more important than quality. It looks somewhat like I’d image a Series 3 Land Rover would look like if they’d never stopped production.) 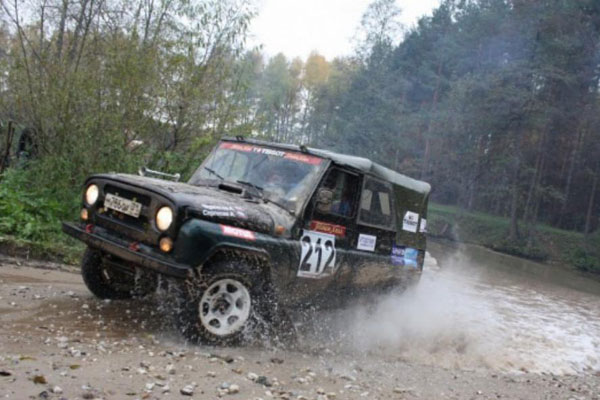 Alina and Alexi In action

So how did you get up to such a level? What events have you competed in before to be able to win the championship?

“Nothing,” she gasps with a self-conscious smile. My driver, Alexi Cherksov, asked me to be his co-driver only because I know all the rules with all the paperwork. I’ve been into Trophy and Rally-Raid since I was a little girl and started helping out as a judge when I was 12 or 13, so am good at all that stuff. That’s why we started as a team.”

And what has Alexi won in the past?

“Well, actually it was his first year in Rally-Raid too. For three years he was in Trophy, (*slow, incredibly hard events where a winch gets used more than 2nd gear) But in Trophy although it is hard to control the traction and angle of the vehicle there is one element that is missing; speed, and so he wanted to experience that. It’s the same as Boris Gadasin, the organiser of this event, he won big Trophy races, even the Ladoga Trophy before ‘graduating’ to Rally Raid, so it’s not that unusual.”

So the first events were a lesson for you?

“Yes. In the first race we broke something in the steering… I don’t know what exactly, but it was very soon after the start so it was very disappointing. The second was at the Northern Forest and it also didn’t go to well. We came too fast into a corner, again quite near the start, and fell over the snow bank.”

Again, perhaps something to do with her modesty, but Boris who’s come in to get a cup of tea interjects to explain that actually they crashed at over 100km/h and rolled 4 times through the snow and trees. “But I trust my driver,” she said, “After the accident he knew the limits of the car and we never had an accident again. The next event we drove really carefully, just for the experience of finishing… and were 2nd and the one after that we won.” 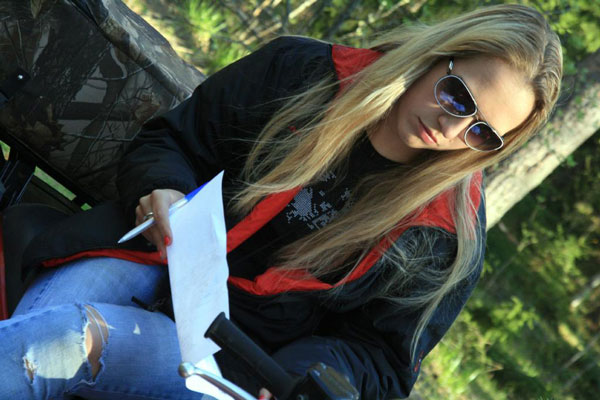 Event secretary; half job, half hobby

You make it sound so easy!

“No, no, it was never easy. We had some very strong competitors and in Rally-Raid you have to concentrate at every moment, every turning and every distance between what is written in the roadbook, and you have to watch the driver, see where he is, how he is coming to the corner because as I am looking at the tulip diagram I know more about it than he does. He has to drive as fast as possible, driving almost blind, keeping the car in control and not breaking it… and many times we won our fights only by seconds.” 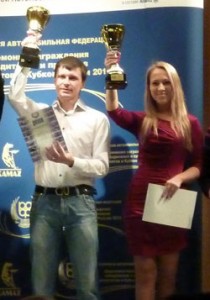 With the championship trophy

So winning the championship at the first attempt was obviously the high point, but what was the lowest?

“I guess blondes have some kind of reputation about map reading and directions, but I only got us lost once… Unfortunately it was in the penultimate round where we knew that we were close to winning the championship, so when we saw all the other cars coming towards us we spoke some interesting words to each other! It was a really bad moment, but eventually we found out that it was a mistake in the book and many other people got lost as well, so actually it wasn’t so bad in the end.”

And what would you say is the secret to winning?

“The secret is not just one thing, it’s something like the combination of a fast reliable vehicle, two people in the car that completely trust each other and maybe the most important thing of all is luck… luck that we never had to stop and change a puncture or had to stop because of a silly little problem. Or maybe for those that have it, a lot of money is the main thing!”

What are your next plans? Are you defending your title or moving on to bigger projects?

“Well, if the opportunity comes I would love to compete in some European events. That would be an amazing experience! The Baja Portalegre 500 for example, or the Silk Way if a foreign team wanted the benefit of having a local who knows all the rules and procedures with them. But this year my place is at the organiser’s table, not the co-driver’s seat. Rally-Raid is an extreme sport and a girl’s body is much softer than a man’s. I started to have problems with my back before the end of the year from the compression that comes with all the hard landings, and understood that I would start to have some real problems if I continued to race. But I was a marshal, referee and secretary for 10 years, so I really love it. It was a really great experience that I am very grateful to have, I guess not too many of us in the HQ office get such an opportunity to see the other side of the sport… and I suppose it will make me better at my job, which is also good! So don’t think I am unhappy to be sitting back in the caravan while the others are out racing! It’s my favourite place!” 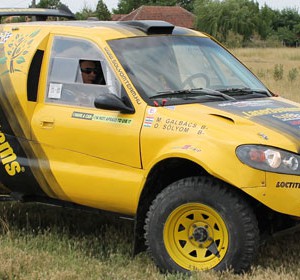 It turned out at the team’s test two weeks ago that there is some problem with the side gear of the HAWKIA. As it was found...
Copyright 2011-2016 Rallyraid.net - RISE Network. All Right Reserved.
Back to top