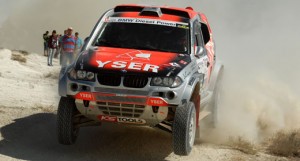 Robb Pritchard._ These days, with the Greek crisis dominating the news and politics, Europeans are well used to being effected by what is happening in other countries… and it is the same with the Spanish Baja, Round 4 of the FIA World Cup for Cross-country Bajas… although it is something that happened in Russia that is the cause. Having a part of the Dakar Series take part on the other side of the continent a week before means that many teams only have the resources to do either one or the other… and many chose the Silk Way Rally.

Only FIA World Cup regulars Leonid Novitsky and Jean Louis Schlesser, both noticeable absentees from the Russian mammoth event, entered the 2011 Baja Aragon against a host of eager locals, but Schlesser in his rear-wheel drive buggy was always going to be at a massive disadvantage to his rival’s 4×4 BMWs and Mitsubishi Racing Lancers. And so it seemed like easy points for Novitsky as he eased his colourful X-Raid BMW X3CC off the starting ramp and into Friday’s prologue stage, but straight away it was the Portuguese drive Filipe Campos who stormed into the lead. “In Portugal diesel cars run with much bigger restrictors so the car feels ‘castrated’. So it’s good to come here where the rules are different, where I can really feel the full potential of the car,” he said.

A reporter at the Silk Way, who shall remain anonymous, was a little dismissive of the Baja Aragon, claiming that the field was made up of Dakar B-team drivers, those who scrap in the dust and sand for places just outside the Top 10, but I think that does a lot of the drivers a big disservice. Certainly, if Leonid Novitsky, current Cross-country world champion and 2011 World Cup points leader, was thinking that he’d just have to pick up the pace a bit to bag some easy points he was very much mistaken. In fact he was comprehensively out-driven. 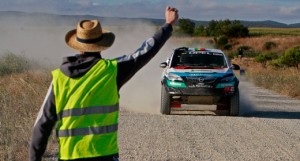 The dusty Spanish tracks are fast and rocky and even though the July sun wasn’t quite as harsh as normal, perhaps making it a little easier on the drivers and mechanical components, but the 617km route could never be described as easy. There are no easy routes in rally-raid. It was also great to see such a wide variation of vehicles n the event. We’ve perhaps become quite used to seeing the BMWs and the slightly wacky Racing Lancers, but Rui Sousa was in contention for a podium in his Isuzu D-Max until his clutch went and Portuguese T2 champion Nuno Matos was again in his stunning new Astra Proto. Add to these the SAM Mercedes, the hulking Opel Antara of Hungarian Szalay Balazs, G-Force’s monstrous G-Force Proto and the amazing looking new Mini, here driven by Yser team boss Bernardo Moniz Maia to 8th place, and you have an amazing selection of cars competing on some the toughest tracks in the world of motorsport. I have never quite understood why the WRC gets relatively so much coverage, even the almighty Dakar seems constantly starved of airtime…

And the Baja Aragon also has it’s place on the list of motorsoprt greats. Now into its 28th year names like Vatanen, Lartigue, Peterhansel and Al-Attiyah have been etched into the winner’s trophies and for 2011 a new one joined them. After 17 years of trying Filipe Campos unleashed the latent power of his BMW to win every stage apart from the last to claim a dominant victory, ahead of 2009 Dutch national rally champion Bernhard Ten Brinke in his Racing Lancer.
Going into the final stage in third Novisky was perhaps looking forward to the lower step of the podium but three punctures in the stage cost him a lot of time. Baja cars only carry two spares and they could have had a picnic in the time it took to wait for Moniz Maia to arrive in his Mini All4 to donate his spare. 7th place was certainly not what he came here hoping for and his corner of the X-Raid service area was a rather subdued one.

Four time Baja Aragon winner Schlesser could only manage 10th place in the end and he’ll surely be looking forward to the Pharaohs Rally in Egypt at the beginning of October where his buggy will come into its own. The next round of the FIA World Cup will be in Hungary on the 25th of August and recovered from the gruelling Silk Way Rally where rally-raid new-boy Vladimir Vasliev sensationally won a stage, last year’s winners G-Force will be back to join the world class field. 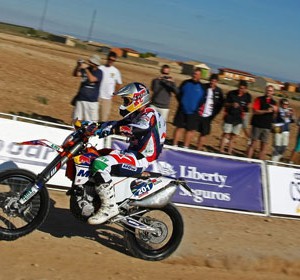 Today’s weather –less hot than previous editions- has favourished runner’s performance, which has been dominated from...
Copyright 2011-2016 Rallyraid.net - RISE Network. All Right Reserved.
Back to top