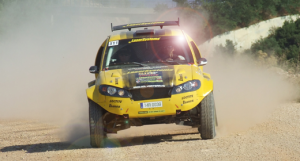 Sólyom Team reached the island of Evia Thursday morning after a 28 hours long journey. The service park of the rally was set up on the sea shore promenade of Edipsos and in one nearby street. After setting up their service area, due to the excellent organisation, Sólyom Team completed the thorough administrative and technical checks quickly and smoothly.

Friday
At the 4×29 km prologue it turned out that HAWKIA, that was built for Central European races, doesn’t really like the 45 degree Mediterranean climate. It was not only the cooling water that boiled but also the petrol got overheated in the fuel tank. To avoid this problem, in the evening the mechanics made some quick changes on the cooling system. The day ended sooner than planned as the originally planned night specials were cancelled by the organiser for safety reasons at the request of the fire service and the police.

Saturday
On Saturday the crews had to cover 400 kilometres. The engine was overheating continuously despite the changes made the night before. On the longest, 105 km special the crew Sólyom – Galbács turned back into their own dust in a narrow U-turn on a hill. As they couldn’t see anything, they fell in a ravine from where they were able to escape only with help. Neither the crew, nor the car suffered any damages, so they were able to continue on Sunday. Due to the overheating of the engine some more changes were needed, so the mechanics moved the cooling system from the rear part of the car to the front and they made some openings on the front parts of the bodywork of the car. 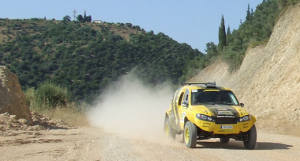 Sunday
Saturday was very long and tiring for all crews. By Sunday the weather became even hotter and the wind stopped completely that made circumstances even more difficult so the organiser decided the shorten the course of the day to 140 km. This time the cooling system of the HAWKIA worked perfectly, the route that was quite complicated was coloured by pleasant overtakings. At the prizegiving at the end of the day, the crew Sólyom – Galbács was awarded fifth place in their category.

Olivér Sólyom: “In Evia we experienced the real cross-country rally as in the mountains of Greece there were no uneventful moments. In the mountain passages we had to avoid everything from rocks to goats and the alternation of forest roads and steep slopes with ravines required utmost concentration. Finally we didn’t drive around plough-lands where only engine power counts. Organisation was faultless and the crew were helped in all possible ways. We say thanks to our Greek friends that they presented us with the experience of Evia Rally Raid! And above all, thanks to our mechanics Zoltán Pék and Csaba Bélteky who fought at full throttle for us to reach the finish line.”

Mátyás Galbács: “At first sight I found the marks in the roadbook a bit strange but it turned out right in the first special that they depict the reality perfectly. The only question was what to expect between two marks, we had to drive with this kept in mind. We completed complicated navigational specials, we had to concentrate constantly. This was the best rally for me ever, and not only because of the seaside or the mountain tracks but also because of the attitude of the organisers and the kindness of local people.” 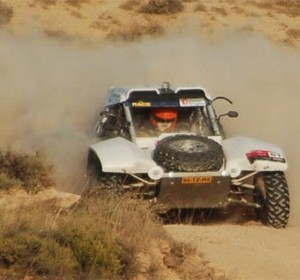 This weekend, Chris Leyds with his Mcrae Buggy managed to win the T3 class in the 2011 Baja. He managed to a 30 minute gap towards...
Copyright 2011-2016 Rallyraid.net - RISE Network. All Right Reserved.
Back to top