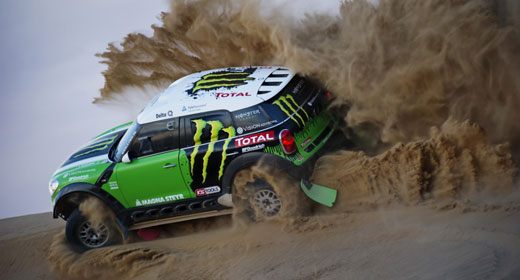 The general consensus is that if you take away manufacturers with their multi-million dollar development budgets and household name drivers then the event, or even series, is in free-fall towards an ignominious death… Volkswagen may have withdrawn their works team from the Dakar and its associated Series to focus on other areas of motorsport, but beyond the brightly coloured veneer of marketing strategies and brand awareness the Silk Way Rally is still a thriving battlefield of so-called ‘amateurs’ who build and develop their cars to race across the sands and mountains for one reason and one reason only… because it is their absolute passion!

They might not have the sacred mark of VW embossed on the grills but the vehicles that X-Raid and G-Force will be bringing to the event are stunning beasts; the eye-catching curves of the green Monster Mini with its tried and tested BMW running gear against the awesome fire-spitting 7 litre V8 G-Force Proto.

And because of the nature of the course, laid out across Russia by the Dakar’s ASO team, with its varying terrain, the 2011 Silk Way Rally has all the promise of being a fascinating fight. Leonid Novitsky, the reigning Cross Country world champion, was easily beaten by two-time Baja World Cup winner Boris Gadasin at the first round of the FIA World Cup for Cross Country Bajas in Italy, but Gadasin lasted just 4km in the next event before barrel rolling through the desert. In the Baja-like stages in the forests near Moscow Gadasin will have the advantage but when the landscape opens up into vast plains of scrub and desert the mid-section sands will play to Novitski’s strengths.

Yet there is one man who can never be counted out of any fight though, no matter if the ground he races on is not that of his birth, and that is the living Rally-Raid legend Stephane Peterhansel. His victory in the insanely hot Empty Quarter in the Abu Dhabi Desert Challenge means that between the three of them they all have one win apiece in the FIA World Cup so far.

Both X-Raid and G-Force have Russian drivers, but G-Force, with its workshop near the centre of St Petersburg is every bit a local team… and as I was in town I decided to pop in and see how their preparations were going. I was greeted by the pretty Marina Kosenkova who has so many jobs that she can’t describe her title in just a couple of words. “Kind of a manager, translator, international negotiator, logistics co-ordinator…” she smiled, but he was quick to explain that there is no benefit at all for a Russian team racing on home ground. “Everything on the car, not just the engine, transmission and suspension, but every electrical component, almost every nut and bolt, has to be imported through the infamously inefficient Russian customs, with carriage costs and import tax on top,” she said. “What all the other teams will have to do to get their cars and trucks through the border… we have to do with nearly every single piece on the car… and that’s my daily job!” 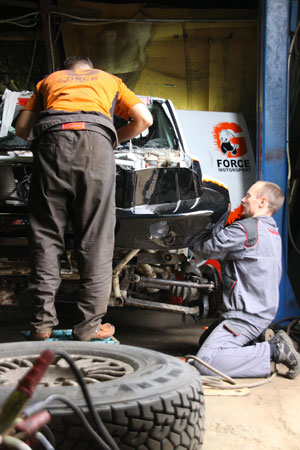 With just a few days to go and with 4 team cars to prepare and set up Boris Gadasin is a busy man, but for Rallyraid.net (and thanks to Marina haranguing him) he had a few minutes to answer a couple of questions and the first thing I asked was about his thoughts on the demise of VW. I was expecting him to say that he was quite pleased to have a better chance of getting higher up the standings but was quite surprised by his answer. “No, it’s terrible for the sport,” he shrugged. “The works teams like Volkswagen are the landmark, the lighthouse, that us ‘privateer’ teams strive towards and rate our performance against, so not having them here is a very bad thing. But I do expect that there will be some ‘supported’ private teams running the ex-Dakar cars as even without any more factory-backed development they will be competitive at least for another season, if not longer.”

Just because VW have gone it doesn’t make the event any easier for any of the competitors. The route is laid out by the organisers of the Dakar and passes through some of the toughest terrain the country has to offer, so I asked what the team is hoping for in the event. “In my opinion Stephane Peterhansel is one of the best drivers in the world, he’s fast on both the ‘Baja-type’ stages as well as in the desert, so just to be able to compare our performance to his will be a very valuable experience. And like last year, we’ll aim to get through the stages, through the whole event, as best we can and we’ll see where we are at the end. I can say no more than that.”

“And what is special about Silk Way for G-Force compared to other events?” I asked.

“Well, in the first place, the Silk Way is a good way to show Russia to the rest of the world and it’s also quite interesting for us to race against a manufacturer-supported team like X-Raid. We don’t just tune and drive our cars, they are completely original prototypes that we have designed and built ourselves right down to each nut and bolt, so it’s great to test and demonstrate everything we have created from the first drawing on a piece of paper to the Silk Way Rally.”

From that piece of paper a few short years ago the team has come an amazing way, and their new pride and joy, their ‘fast support’ T4 truck, will be competing in the Truck category, although they surely won’t be challenging the kings of the heavy-weight division, the Kamaz Master Team. For the local team, just like in the Dakar for the last 10 years, nothing short of a dominant victory will be good enough as they haven’t just got a reputation to uphold, in the Silk Way Rally national pride is at stake!

Last minute practice took the form of the Simbirsky Rally, part of the Russian Rally Raid championship, held in the deserts around Astrakhan…  no co-incidence that it’s the same route the Silk Way will be passing through in a few days. Since the retirement of Vladimir Chargin the team has been investing a lot of training in what the call the ‘new generation’ and taking a big step up to take victory was Ayrat Mardeev, who at a tender age of 24 has now graduated from co-driving for his father Ilgizar on the Dakar to beating his in a Kamaz of his own. Last year’s winner Eduard Nikolaev certainly won’t be keen to relinquish the crown he won last year when he famously beat Chargin through the deserts to Sochi. 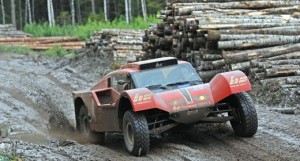 Another team to look out for is the HS RallyeTeam from Germany in their otherworldly looking SMG buggy. The twin turbo BMW diesel engine has incredible torque, the car is very light and the rear wheel drive configuration allows for massive front suspension articulation… all great attributes for the tough desert, which helped them take an stunning 10th place on this year’s Dakar. But above that fact that the buggy looks amazing just parked on tarmac, or that Matthias Kahle and Dr Thomas M. Schunemann are consummate racers, the HS Team are one of the most friendly and down to earth guys in the bivouac.

So, Saturday 9th July, on the podium in Red Square, right outside the Kremlin, the heart of Russia, a massive field of 105 cars followed by 34 trucks will head off to race through the forests, plains, steppe, deserts and mountains of this vast country. 4000km later the survivors, those that haven’t succumbed to the perils that the Russian wilderness will throw at them, will spray champagne in the Caucasus mountains… but there will be plenty of stories and daily updates before then. You can follow the updates provided by my intrepid Rally Raid brother Pep Cifre as he follows all of the action. Check out the news, intrigue and stories right here! 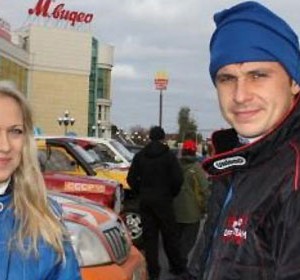 Interview by Robb Pritchard (Russia)._ Even well into the 21st century women in motorsport are still a novelty. Names like...
Copyright 2011-2016 Rallyraid.net - RISE Network. All Right Reserved.
Back to top