After seven days racing and a total of 3,983 km (2,366 of which were timed), 76 of the 130 crews which started last July 10 on the Red Square have reached Sochi, the finishing line of the 3rd Silk Way Rally. This historic edition has rewarded drivers who were more used to finishing just behind the winners, both in the car and in the truck category. Pole Krzysztof Hołowczyc had already won at Baja, but his victory in Sochi represents his first win in a long stage race. Aleš Loprais also took a well-deserved reward among the colossi, beating the Kamaz armada.

A finale worth of the event! The finish of the 2011 Silk Way Rally has come to a close before a crowd of thousands at Sochi’s Polyana Grand Hotel, in the host city of the 2014 Winter Olympics Village. The big crowd saw Pole Krzysztof Hołowczyc (BMW, cars) and Czech Aleš Loprais (Tatra, trucks) climb onto the top step of the podium at the end of a race which was very eventful from the beginning to the end.

In the car category, Hołowczyc benefitted greatly from the mechanical problems which cost Stéphane Peterhansel (Mini) 2h 24′ in the first stage, but the Pole was still able to effectively manage his advantage and did not make any mistakes on the trail. This earned him his first win in a one-week race and represents a watershed moment for him, since he will now be counted among the regular contenders vying for victory. Not only did he finish ahead of the world reference in this sport, Stéphane Peterhansel, he actually beat the Frenchman by 1h 59’28”

But on the Sochi podium, all eyes were on Alexander Zheludov, 3rd in the final general classification (3h 24’33” back) and, most importantly, the first Russian! The former Overdrive pilot, now racing for Nissan Frontier, posted what was a fantastic performance if one remembers that he was plagued by recurring head gasket problems. 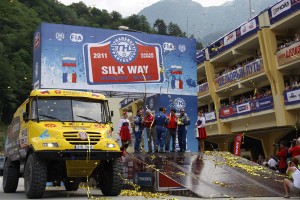 The 2011 Silk Way Rally also was a breakthrough moment for Aleš Loprais, in the truck category. So far, the Czech, a fierce and very reserved competitor who has won three stages in the Dakar, had never managed to finish higher than third in an international race, which he did in the 2007 Dakar and the 2009 Silk Way. But he has finally been able to take a big win and stake his claim with a view to the next Dakar. And although the race was finally decided on a technicality the evening after the 6th stage, when Russian Firdaus Kabirov (Kamaz) was handed a one hour penalty for speeding during the transfer, the nephew of Karel Loprais (a six-time Dakar winner in the truck category) still is a deserving winner. Indeed, he was the only driver who was able to stand up to the Kamaz’s dominance on their home turf, and prevented the blue armada from snapping up all of the specials by taking the 4th stage.

Just for once, the Kamazs will have to settle for the other podium places, with Russian Firdaus Kabirov finishing 2nd, 16’41” behind the Czech. His young teammate Andrey Karginov (Kamaz) was a deserving 3rd, 38’36” back. Karginov, who was making his debut on the international scene, posted very consistent performances and will certainly be a force to be reckoned with during the next Dakar. Just like the unluckiest driver of the 3rd Silk Way Rally, last year’s champion Eduard Nikolaev, who led the general classification for a brief period before breaking his engine during the 3rd stage. 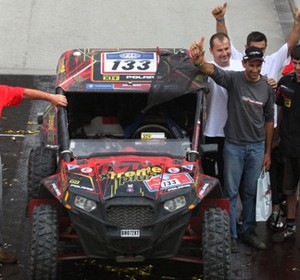 Due to the high level of water of the river that competitors were meant to cross during today´s stage, the seventh special...
Copyright 2011-2016 Rallyraid.net - RISE Network. All Right Reserved.
Back to top