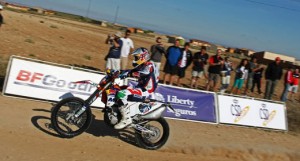 Today’s weather –less hot than previous editions- has favourished runner’s performance, which has been dominated from its start until the end by the Portuguese Filipe Campos in the motorbikes category, finishing with a remarkable time of 3:40:24.0.

His best previous mark was in 2009, when he occupied the third position, but he seems having returned to the Baja, after a year’s absence, with renewed energy -something that may serve him to claim the final victory of a race which has seen him participating 17 times, since he first came in 1998.

The day’s surprise fell on car’s driver Joan Roca after he was forced to abandon the race due to the breaking of the transmission of his Mitsubishi. Roca’s dissapointment was bigger as he had achieved a second position in this morning stage, right before the incident. 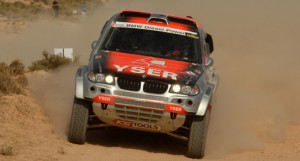 Finally, the second place went to Ten Brinke, from Deutschland, 3:21 seconds away from the winner, and Russian Leonid Novitskiy arrived on third position.

Although Rui Sousa was very fast at Special Stage’s yesterday, he got a seventh position today. Meanwhile, one of the favourites, Jean Louis Schlesser, ended up in a fragile ninth place.

The first Spanish of the clasification is Salvador Segura, whose fourteenth place has allowed him to overcome the Spain Rally Championship of Road, followed by Mark Blázquez, sixteenth in the Baja.

The female duo composed by Marta and Mari Ángeles Hernández Súria began today its adventure in the thirty sixth place.

In motorbikes, Marc Coma has reached the overall stage after the abandonment of Joan Barreda, leading until the end the first race. Thus, Coma is 5:19 seconds ahead of second Gerard Farres and 10:39 of Portuguese Gonçalves.

The winner of last year, Marc Guasch, has had problems on his fuel strategy at the end of the first stage, which has delayed his final arrival. Despite having crossed the final line, he had lost so much time and he couldn’t overtake in the overall results with his sixth position in the second race.

Among the quads, Óscar Romero has clearly dominated the area and has achieved the second best timing of the general race, only after Coma. In the case of Mario Gajón, born in Aragón and second in this category time ago, has suffered a mechanical failure which forced him to leave, letting Masante and Montero in the provisional podium.

The Spanish Gravel Championship has been won by Serrat, Triviño and Carlos Aldecoa. However, the awards ceremony will be celebrated tomorrow in conjunction with the Baja at 20:00 pm in the Pilar’s Square of Zaragoza. 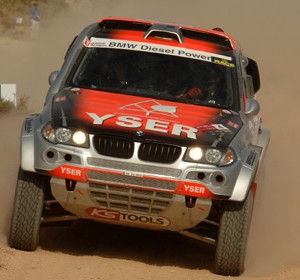 Baja Spain has started yesterday afternoon in MotorLand Aragon with the Super Special Stage, a race of 6 kilometers which...
Copyright 2011-2016 Rallyraid.net - RISE Network. All Right Reserved.
Back to top