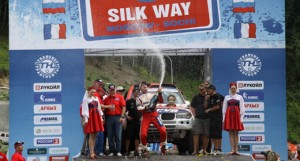 The Monster Energy X-raid Team completed the gruelling Silk Way Rally in first, second and fifth positions at the podium ceremony in Sochi on Saturday.

Polish driver Krzysztof Holowczyc and Belgian co-driver Jean-Marc Fortin claimed outright victory in their BMW X3 CC, the French pairing of Stéphane Peterhansel and Jean-Paul Cottret finished second in a MINI All4 Racing and the Russian duo of Alexander Mironenko and Sergey Lebedev were fifth.

The team’s three crews had crossed the start line in Moscow’s Red Square on July 9th and reached the podium at the Olympic village in Sochi today.  The success was a first for Holowcycz and Fortin with the X-raid team and it was made a little easier when the seventh and final short stage between  Maykop and Sochi was cancelled at short notice because of heavy rains that made a crucial river crossing too hazardous. The Pole had taken the lead on  the second day and won two specials en route to the win.

“I am happy about this victory, my first with the X-raid team,” said Holowcycz. “They have given me a good car and provided excellent service  and assistance. 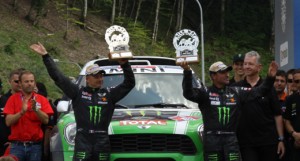 “This is the only way to fight for victory. From a sporting point of view I was lucky that Stéphane had his problem on the first two day. Otherwise he would have certainly won. As well as the stage wins, it was also very nice to be able to follow behind him. I’ve learned a lot. The Silk Way Rally was hard, the stages were long and it was good preparation for the Dakar.” For Peterhansel, the first stage had been crucial to the eventual outcome. After problems with a supply of diesel, he lost over two hours to the front-runners and was classified down in 68th position. But the Frenchman worked his way quickly back up the leader board and, after the third stage, he had already reached fourth overall. A day later, he snatched second position. Peterhansel also won two of the six stages.

A day later, he snatched second position. Peterhansel also won two of the six stages. “I’m rather disappointed, I finally came to Russia to win,” said the Frenchman. “But at least we were able to use the rally well to continue to test the MINI. The prerequisite for this was good. The long tests were stressful and there was also a certain amount of pressure weighing on us.” 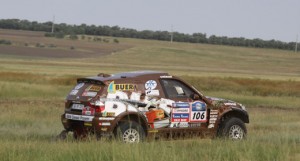 Mironenko caused a stir with fifth overall. The Russian finished in third position on two stages and was fourth for long periods. Unfortunately, he remained stuck on two legs and had to wait for help from other competitors. “The fifth place is fine for us,” said Mironenko. “I think we showed we can compete with the top.”

“We started with three cars and have taken three to the finish, plus we could still secure the top two spots in the standings,” said Monster Energy X-raid team boss Sven Quandt. “Alexander took a good fifth place. It could not have worked out better for us. Surely Stéphane is disappointed but, on the other hand, we carried out a lot of work on the MINI. The Silk Way Rally was good preparation for the Dakar, but we still have work to do.”

The next event for the Monster Energy X-raid team takes place next weekend. The team will tackle the Baja Spain, the fourth round of the FIA World Cup for off-road rallies, on July 22-24. 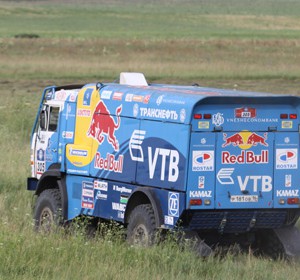 Pursuant to rider no. 3, Russian Firdaus Kabirov has been handed a penalty of 1 hour and 1,000 euros for speeding during...
Copyright 2011-2016 Rallyraid.net - RISE Network. All Right Reserved.
Back to top