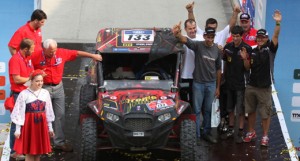 Due to the high level of water of the river that competitors were meant to cross during today´s stage, the seventh special of the Silk Way Rally was cancelled and the rally caravan drove to Sochi, were the podium was installed.

Thierry Magnaldi’s challenge, to take the Polaris RZR 900 to the finish line, has been accomplished with honors. The French driver brought the machine to the 29th place overall, in spite of penalties.

“The outcome is quite positive. I´ve never driven an RZR before and we crossed the finish line! It is a great result. We did not have major problems on mechanics and the guys only did normal maintenance, the starter and yesterday, we changed transmission. For the starter, it is true that the evening before, with the “vapor lock” problem I forced it a lot…

The first day I had problems with the “vapor lock”, but it is a problem of youngness that was quickly solved. The machine, once it is well configured, it is very performing and capable of finishing among the 15th and 20th position regularly.
This small machine, out for the first time, is just great! As all cars, it has some grounds that fits better to it, and it is very enjoyable toy to drive it on the sand,” assures the driver.

The Silk Way Rally was a test in real racing conditions and the objectives were fulfilled. Now it is time to look ahead.  “We will continue to develop the RZR, to make it more reliable with the next Dakar as the target. Now we need to get to work and, but honestly, there is not so much to do! When it will be reliable, why not to go for results?

Polaris RZR 900 is a machine that allows competitors to participate in cross country rallies with a lower budget… I didn´t even change tires during the week and I had no puncture either! The formula can also fit to two, and it is a great machine for former bikers!” says Thierry Magnaldi, proud of his new experience. 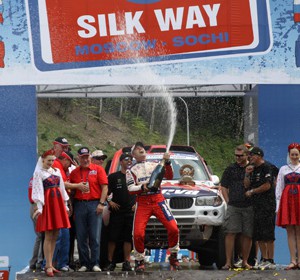 The Monster Energy X-raid Team completed the gruelling Silk Way Rally in first, second and fifth positions at the podium...
Copyright 2011-2016 Rallyraid.net - RISE Network. All Right Reserved.
Back to top