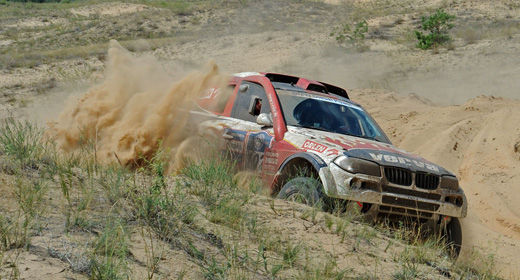 The Monster Energy X-raid Team had three reasons to  celebrate on the third leg of the Silk Way Rally between Volgograd and   Astrakhan on Tuesday. The team’s three cars snatched the top three  positions on the day’s special stage.

Polish driver Krzysztof Holowczyc and Belgian co-driver Jean Marc Fortin   secured their first stage victory in a BMW X3 CC, the French duo of Stéphane   Peterhansel and Jean-Paul Cottret finished second in the team’s MINI All4 Racing and the Russian pairing of Alexander Mironenko and Sergey Lebedev   rounded off the top three in a second BMW X3CC and moved up to second place  in the general classification.

The day was about Holowczyc celebrating his first stage victory. He began the   special second on the road behind Peterhansel and managed to pass the   Frenchman a few kilometres from the finish and extend his advantage in the   overall standings.

“I am happy with this day’s victory,” said the Pole. “The car was  extremely strong today. Actually I do not like this type of stage. We were   shaken the whole time and it was easy to damage the car. But we came through   it well.”

Peterhansel looked set to claim his first stage win through the early   sections of the special, but a small mistake dropped him behind his teammate.   “Shortly before the first dunes, in the camel grass, we got stuck,”   admitted Peterhansel. “I selected reverse and then we got stuck on a large  clump of camel grass. It was about nine minutes before I was able to get  going again. This was very disappointing.”

Mironenko rounded off the successful day for the Trebur-based X-raid team  with the third fastest time. He enjoyed a close battle with Aleksandre  Zheludov and eventually did enough to claim second place in the overall  standings to boot. “The second part of the special was very hard,”  admitted the Russian. “We were shaken vigorously, but I was pleased with  third place, since this stage was harder than yesterday.”

“Today’s result was very good for us,” said Monster Energy X-raid team boss Sven Quandt. “However, today’s stage was very hard for the cars and it has already   taken its toll. It was important to have strong suspension and a good  chassis. Our three cars are running like clockwork”

Tomorrow (Wednesday), crews will tackle a 400km loop stage around Astrakhan.  Fast tracks will again be part and parcel of the special, which also includes  45km in sand dunes and a return to faster tracks for the final 60km. 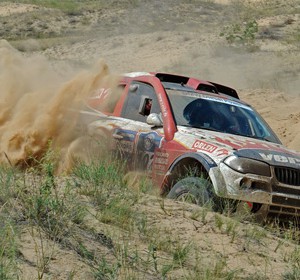 Polish Krzysztof Hołowczyc has taken one more step to consolidate his lead in the rally. His team mate Stéphane Peterhansel...
Copyright 2011-2016 Rallyraid.net - RISE Network. All Right Reserved.
Back to top