The organisers had warned the competitors: the 4th stage, dominated by sand, was going to be difficult or even very difficult. And they were right! It took today’s winner, Stéphane Peterhansel, about six hours to cover today’s 400-km-long timed stretch! The Frenchman ended up beating the GC leader, Krzysztof Hołowczyc, and Russian Zheludov. Moreover, he took advantage of the mechanical problems suffered by his other teammate, Alexander Mironenko, to climb up to 2nd in the GC, where he still lies over 2h behind his Polish teammate. With regards to trucks, for which it was obviously easier to pass the weak dunes, Czech Aleš Loprais took today’s special, 14’46” ahead of Firdaus Kabirov. Nevertheless, the Kamaz driver still leads the GC with a very comfortable margin of over 45 minutes.

Everyone knows that Stéphane Peterhansel (Mini) excels when the going gets tough. It is no accident if one is able to win nine Dakars, first on two wheels and then on four. Today, the Frenchman proved this once again during the 4th stage of the 2011 Silk Way Rally. “Peter” drove flawlessly throughout the special stage, on a 400-km route which was made even more taxing by the afternoon heat. But despite not making the slightest mistake, the Frenchman spent about six hours inside his Mini, which had become a furnace under the blazing sun. Nevertheless, it was precisely these difficult conditions which helped him prevail and take his 2nd stage win this week, 9’04” ahead of his teammate Krzysztof Hołowczyc (BMW). The Pole got stuck at km 275 and almost lost the runner’s up position on today’s stage, with Russian Alexander Zheludov (Nissan Frontier) finishing only 20″ back.

Today’s bad news concerned Russian Alexander Mironenko (BMW). The Russian driver got stuck several times, losing over 2 hours and therefore the 2nd place in the GC he held when he set off this morning. Frenchman Christian Lavieille (Nissan Hardbody) also had a bad day at the office. Following a steering malfunction shortly after CP1, the Dessoude driver had no choice but to leave the special stage after performing makeshift repairs. This led to him being disqualified from the race by the officials for not respecting the route.

Pole Krzysztof Hołowczyc still has a very comfortable lead of 2h 02′ in the general classification, but he is now followed by his teammate Stéphane Peterhansel, who has a slim margin of 3’31” over Russian Alexander Zheludov. The podium is still up for grabs…

Just like in the truck category! Today’s stage was marked by Aleš Loprais (Tatra), who made up for yesterday’s navigational mistake by beating Kabirov and Karginov’s Kamazs for the win by 14’46” and 18’26”, respectively. This is the Czech’s first win in 2011, and it also allowed him to take the 3rd place in the GC from Hans Stacey, who suffered from mechanical problems.  As for the general classification, Firdaus Kabirov was able to defend his lead with ease. He now has 45’11” over his teammate Andrey Karginov, who is only 2’40” ahead of Loprais! 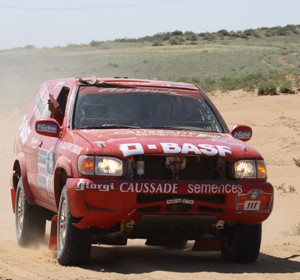 The category of the production cars is usually quite crowded at the Dakar, the less preparation of the vehicles makes it attractive...
Copyright 2011-2016 Rallyraid.net - RISE Network. All Right Reserved.
Back to top