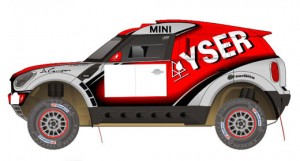 Within hours of finishing first, second and fifth overall in the Silk Way Rally, the Monster Energy X-raid Team announced that it will tackle next weekend’s Baja Spain Aragon (July 22-24).

The service trucks and support staff began the trip to Spain for the fourth round of the FIA World Cup for Cross-country rallies on Sunday. Russian driver Leonid Novitskiy and his German co-driver Andreas Schulz will compete in a BMW X3 CC and the event will also mark the first appearance of the second MINI All4 Racing.

Baja Spain is the first of a series of presentations, with the car also set to appear at the Baja Hungary, Baja Poland and the Morocco Rally later this  season.

Novitskiy was forced to miss the Silk Way Rally after falling from a mountain bike and injuring his wrist. But the Russian is fit again and is looking forward to competing in Spain, as he continues the defence of his FIA World Cup title. He currently leads the overall standings by 123 points from French  rival Jean-Louis Schlesser.

The Baja Spain is two reasons to celebrate,” said Monster Energy Team  boss Sven Quandt. “Firstly, it is great news that Leonid is feeling better  and he can attack on the World Cup. Secondly, it is an exciting moment with the second MINI All4 Racing and our Portuguese driver Bernardo. Our goal for  Spain is clear – Leonid should keep the lead in the World Cup and we should continue to develop the cars.

Service vehicles that were used at the Silk Way Rally will return from Sochi to the team’s headquarters in Trebur. The team has the additional logistical complication in that one complete team kit is already on the way to Brazil for the Rally dos Sertoes, which takes place on August 9-19.