And the winner is… Leonid Novitskiy 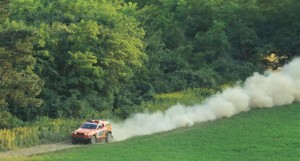 Eight “Hungarian Bajas”, eight winners. In 2011 the 5th run of the 2011 “FIA World Cup for Cross Country Rallies” can celebrate a new winner, who has never won before in Hungary: The Russian Leonid Novitskiy and his German navigator Andreas Schulz in their X-raid BMW X3CC.

They won the Baja in 03:53:04 hours and secured their overall lead in the World Cup – nobody could beat them now anymore, even if the second placed Jean-Louis Schlesser (Schlesser Buggy, leading in Two-Wheel-Category) would win the 6th (Pharaons Rally, Egypt) and 7th (Baja Portalegre, Portugal) round of the international Championship.

But Novitskiy will go to Egypt. After the race he told: “At the first selective we were really sleepy, but we do this always on first rounds. Zapletal was not far from us, but at SS6 we did an amazing time, so if we had had any problems. I think we would have also won in that case. We are glad, because of the points, and because of the winning, but we will have another big race in Egypt!” 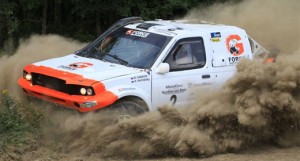 Second in the Baja became the Russian Boris Gadasin in his powerful (and now stable) G-Force Proto V8 (+03:11) in front of the Czech duo Miroslav Zapletal & Tomas Ourednicek (+03:54) in their private X-raid BMW X3CC. “We changed the settings, and changed the stabilizer, so we made the chance to start fighting again” Gadasin told. “It was not good driving in dust, but, anyway, I´m happy!”

As Fourth – and best Hungarian Team – finished the “Man of Logistics” Károly Fazekas together with his navigator Albert Horn in his BMW X5 Proto (+07:11), followed by the Czech Zdenek Porizek / Marek Sykora (+20.49, Hummer H3 Proto). “Everything was perfect for us” Fazekas said. “The whole race was a nice birthday present for me. We had no technical problems, the car was perfect. It was a great Hungarian Baja, very exciting and enjoyable. We are quite in egal with the others.” 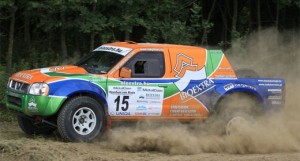 The “flying Romanian” Costel Casuneanu kicked the pedal of his former Mitsubishi Pajero Evo MPR13 work-car, but only could finish on 6th position with 27:05 minutes to Novitskiy. As best Nissan the Hungarian duo Pál Lonyai / Daniel Marton finished as 7th (+48:12). “It was the best race in my life, we did the best results too” said a happy Pál Lónyai. “I’ve just wanted to be in the finish, so we didn’t drive so fast. The car is perfect, thanks to my team!”

Sensational finish also for the German father-son pairing Phillip and Steffen Beier: The completely self-built Mercedes G320 TD made the 8th position with 49:07 minutes after the leader. Normally no special news, but this Mercedes formally was built as “perfect amateur car” for licence-free rallies – with a budget, less then 10% of a X-raid BMW…

T2 World Cup leader Ilya Kuznetsov from Russia only finished on 6th position in T2-class and 17th position overall – but he also strenghten his lead in the World Cup with this position. The former Ski-Champion Adam Malysz from Poland had to retire with his Caroline RMF Porsche Cayenne – during the FIA-debut at the Italian Baja he still won the class of T2.1 (factory/fuel). 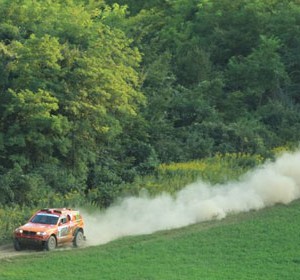 The Monster Energy X-raid team and the duo of Leonid Novitskiy and Andreas Schulz came a step closer to reaching their goal...
Copyright 2011-2016 Rallyraid.net - RISE Network. All Right Reserved.
Back to top