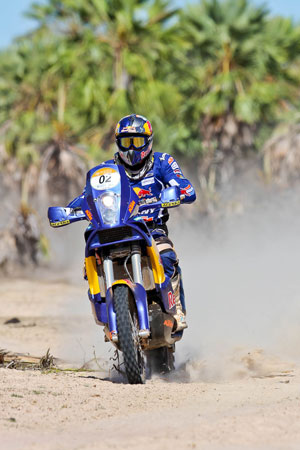 KTM factory rally rider and three times Dakar winner Cyril Despres on Friday completed the more than 4000-kilometer 19th edition of the Dos Sertoes Rally right through Brazil, winning the 10-day event by just a little over two minutes. It was his second Dos Sertoes title as he also won here in 2006.

In what turned out to be a cat and mouse game with second placed Felipe Zanol of Brazil, especially in the last stages, the rally was a thrill right up to the final stage.  Despres’ teammate Juan Pedrero of Spain finished overall fourth.

KTM’s French=born rider, who is also scheduled of compete in the Australasian Safari this year was caught on the back foot right from the start.  A delayed flight into Brazil left him no time to check out the all-important prologue. Then he missed a turn in very dusty conditions and had to go off at 20th place for the first stage. Eating a lot of dust, Cyril then managed to vault his way up to eighth place during the stage, which he described as ‘real Enduro conditions.

Cyril Despres:  “It did not go as well as I expected. There was a lot of dust and starting in twentieth this morning was not good. I paid for the mistake I made in the prologue. I lost time driving in the dust, but I managed to gain a few positions.”

Stage two saw Despres move up the rankings to fourth overall while Zanol continued to consolidate his lead and Pedrero slipped to eight but the following day Cyril missed a waypoint and incurred a five minute penalty dropping him down to sixth overall at the end of the day and 12 minutes behind the leader.  Cyril: “I think the first three days were very technical. But that’s good, there are ten days of competition and we are going to fight.”

Despite losing a little time negotiating his way through a herd of cows, Cyril won back one place in the fourth stage but it was when the rally entered its two marathon stages that his wealth of experience came into its own.  He knew that the rally would enter an area of more open spaces and sandy sections and this would be an advantage for his ‘desert bike’, the KTM 450 Rally.

Cyril finally secured his first stage victory and hit the front of the overalls after the long stage between Porto Nacional and Lizarda, a total of 471 kilometers but with just a 40 second lead there was no time for complacency. Pedrero, meanwhile, was sitting in seventh overall, 33 minutes from the leader. Then Cyril went out in part two of the marathon stage, riding in blistering temperatures up to 38 degrees Celsius, to win the stage and advanced his lead to just one minute 30.  On the day the persistent Zanol was dangerously close behind and only one tenth of a second behind Despres.

From then on Despres managed to keep a slim lead over the Brazilian challenger and picked up some more stage victories on the way to the end of the rally at Fortalese on Brazil’s northern coast, but it was never certain who would emerge as the winner until they hit the finish.

Despres said the rally was very good preparation for the Dakar 2012. “Luckily my KTM is a very solid and reliable machine so we were able to pass many kilometers without any serious problems. We have some new features in the engine and the chassis, and Brazil is an excellent place to test them. In Europe, it is not very common to find such difficult conditions as those here. Also the climate and the fuel are different.” 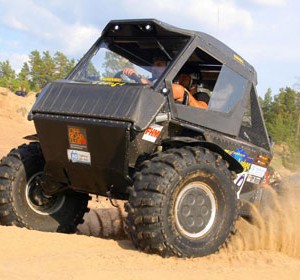 With unlimited resources and years of off-roading experience in some of the world's toughest competitions behind him, has Sergei...
Copyright 2011-2016 Rallyraid.net - RISE Network. All Right Reserved.
Back to top