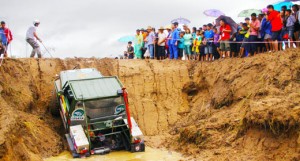 As far as history, prestige and extreme off-roading go there is one event among all others that stands out from the rest, a household name for any in the off-roading and adventure community. Tales of hardship, endurance, overcoming impossible obstacles and even the whole field being evacuated from the jungle by helicopter have all helped create the enduring legend that is the Rainforest Challenge.

The original event was and always will be 10 unbelievably hard days in the sweltering Malaysian monsoon morass, but over the last few years the organisers have been expanding their competition base around Asia and Europe and now with the third edition of the Sanya Rainforest Challenge, China has firmly established itself on the international off-roading map. Based on the same format as its illustrious mother event, extreme is the mundane here, the forest barely accessible except in well-prepared 4x4s and so remote are the jungle bases that there is no hope of phone coverage, never mind internet… no air-conditioned press room for the journalists here, just a camp bed under a plastic sheet in a muddy clearing, showers in the stream… if you are careful of the leeches… It’s hardcore even for the reporters, but unfortunately this means that it is impossible to upload daily reports… 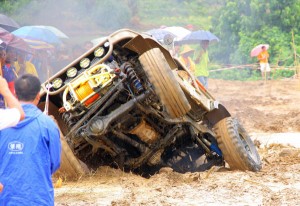 Promoting an event means getting it as much coverage as possible and as you can imagine, spectators would find it very hard to get into the jungle to see the action… which is why a prologue near the city is run before the real competition kicks off. At the press conference the organisers proudly announced that the regional government authority had provided a plot of land especially to help develop the local off-roading scene, a seemingly perfect place for the opening of the RFC. But despite the excitement it turned out to just be an old quarry littered with puddles… except that a couple of days before the start some fiendishly minded people had gone around plotting the darkest evil with marker tape and a JCB… The result was that the car park was turned into a six torturous sections full of axle-twisting pits, holes, drop-offs, climbs and very deep water and despite it being just a ‘prologue’ everything was designed to test winches, mechanical strength of the cars and the skill of the teams to the absolute maximum… all in front of an eager audience. 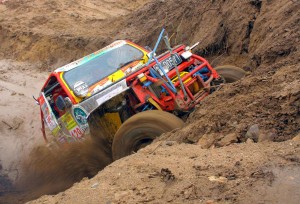 Perhaps fittingly for an event that thrives in thick mud and the harshest conditions Mother Nature can throw at competitors a morning-long tropical deluge greeted everyone for the opening ceremony. I watched the other foreign press, one eye on the downpour through the window as they cautiously lifted the lids of the buffet breakfast trying to find something edible. No matter that we are visitors in a foreign country with a very different and interesting culture, no one really wants stewed chicken feet first thing in the morning! Competitors who still had a few things to fine-tune crowded under the limo bay canopy in front of the hotel and of course the quarry had been turned into a full-on swamp. The road there, in a Pajero with properly battered suspension, led us past a couple of collapsed apartment blocks, swollen paddy fields and soupy, brown rivers that were threatening to break their banks, but that hadn’t deterred the hundreds of humorously excited locals who came with umbrellas and wide-brimmed wicker hats to see action the likes they’d never witnessed before. Collective cries of awe were heard every time a wheel came off the ground and a crowd, a couple of hundred strong, raced across the site from one section to another every time a car floundered. It was great to see such unrestrained enthusiasm, but woe-betide any journalist caught in the way, poised for a shot. Chinese people aren’t exactly renowned for their consideration to others and anyone standing inattentively in the way was likely to be trampled by the herd, expensive camera in hand or not! 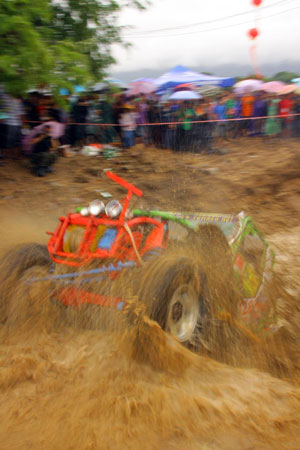 On the official RFC website you will see press release headings such as ‘Unfinished Business’ which refers to the rivalry between the two top teams from the 2010 Malaysian Rainforest Challenge; the Bornean winners and the Land Rover Philippines runners up. Both have made the journey to Sanya and from the announcements I’ve seen from the Philippinoes they won’t be satisfied with anything less than revenge. “We’ve come with hope for victory and surely both the team and cars is capable of that, it’s just the luck element that you can’t control,” says team member Robbi Consunji. “And the initial tactic is to look after the car because it’s not worth killing it here in the prologue as it also has to last the event in the forest. We took an intentional DNF on one of the sections as some of the cars were half way up the windscreens in water… and we have a 3.9V8 which doesn’t really like swimming. But you’ll see that as the competition progresses from Day 2 to Day 3 and on that those who risked everything to get through the prologue will start having things break… and that’s not how you win an event, especially this one!”

The diminutive 2010 RFC champion Chai Miu Shin also didn’t have an easy day in the rain. He got a DNF when his winch cable snapped in the river and the 6×6 army truck sent in to extract him also got stuck, so they had to get the Caterpillar in to drag everything out. “It’s not a problem,” Paul Si, the team’s manager said. “Most people got a DNF today and it’s the main event that really counts.”

And the Chinese? Well, they are such helplessly atrocious on-road drivers that they are either fantastic off-road… or not. One team looking as though they were doing quite well were those in what’s called the Chinese Hummer because of its passing resemblance to a H1. But there’s a serious lack of translators here and communication is hard at the best of times, so for an interview I’m afraid a confused smile and a thumbs up was all I managed to get…

Looking at the competition vehicles there are no huge trucks here, everything is constructed to be as compact and manoeuvrable as possible. To crush cars and bounce 6 feet in the air you need monster truck tyres, to cross the Russian bogs you need massive, barely inflated 40 inch Boggers, but for tropical mud it seems the only choice is 33 or 35 inch Simex Extreme Trekkers and a winch… a very big winch! Most serious vehicles have a PTO, but they are not like the slow things you see on big, old off-roaders, the locals call them God-winches and they are unbelievably fast and are banned in all safety conscious countries! Most of the front end of the cars are taken over by the industrial sized drum and some have Land Cruiser diffs grafted to the side of them, making the cable wind in almost as fast as the car can drive in 5th gear!… although today winching ability was severely hampered by the rain softened ground which turned winch anchors into ploughs and the crowd applauded the hapless co-drivers being dragged along at 20km/h as they tried to angle the point into the easily yielding earth.

There are no different classes for differently prepared vehicles in the RFC, everything is extreme, the only distinction is for winches; PTO and electric and for a few there is only one position worth having; first. The battle now enters the jungle where the challenge of the claggy mud will be multiplied by the spiky undergrowth and the floor covered in blood sucking leeches, which those who’ve been before are happy to tell me about. I am enjoying my last few breaths of air-conditioning, camera batteries are charged, notebook has mostly dried out from yesterday and dry shoes are for the sissies who report from tarmac based motorsport events! … The full report will be online in 5 days.. check back for all the action then. 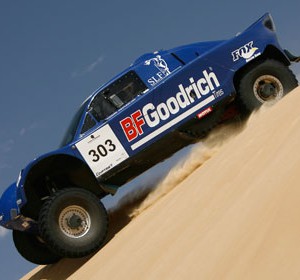 The name of “Schlesser” is a synonym of competition, experience and passion. Winner of Pharaons Rally 2010, he will be back...
Copyright 2011-2016 Rallyraid.net - RISE Network. All Right Reserved.
Back to top