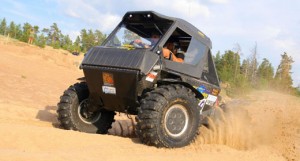 With unlimited resources and years of off-roading experience in some of the world’s toughest competitions behind him, has Sergei Khalzev of Honduras Motorsport managed to create the world’s ultimate 4×4?

It seems the way that extreme off-road machines evolve to suit their environments follows the principles of Darwinism. The Trophy Trucks of America, insanely powerful and with massive suspension travel are perfect for the high speed jumps of the SCORE series whereas the UK trial scene for example, is the domain of nimble Land Rover based vehicles with large electric winches. But from the primordial ooze of the Russian swamps the alpha beasts that roam the endless bogs are the Frogs, the legendary independent-legged, chain-driven buggies that for a long time absolutely baffled the Neanderthals who with their flint tools thought that portal axles were the absolute pinnacle of off-road design. 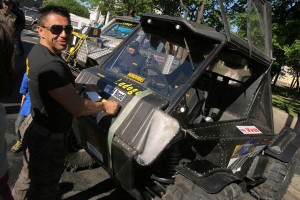 At the Ladoga Trophy startline

In Russia, where the terrain for these vehicles is so tough and varied, the Frogs are already old technology, consigned to the back of a shed on the outskirts of St Petersburg… They have been superseded, a new species has emerged from the Russian mud and it is so new that scientists have yet to name it. (It was simply called ‘Homemade’ on the Ladoga Trophy entry list as though it was a jumper knitted by an old lady) and it’s so extreme that  Ladoga, an event that normal teams would need to spend months on end preparing for, was just its first test-drive! Its nickname is ‘Beaver’ because of its similarities to the animal that dwells in similar environments and even parked next to the other Proto machinery on the Ladoga start line it stood out as something very  different. The cab is very narrow as the co-driver sits behind the driver fighter-jet style and the angular carbon fibre and Kevlar body panels make it look like a futuristic fork-lift truck, or a piece of farm machinery mated with something from Terminator 3.

Magazines often favour budget conscious self-builds, but the ‘Beaver’ is unashamedly an example of what can be created without the limitations of budget restrictions and engineering limitations. Compared to other vehicle it’s off-roading science-fiction. It’s body panels are carbon fibre and to save a few kilogrammes the Hi-lift jack is made of pure titanium. For what this Proto cost to build, you could buy several supercars and still have change left over for a decent trail vehicle! 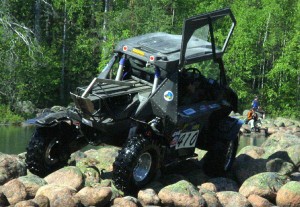 For the past year and a half only rumours about the Beaver have been heard and at its unveiling at the Ladoga Trophy it was as much of a mystery and object of reverence to the Russian off-roaders as it was to the Europeans that  made it out to this world-famous event. Its creator is Sergei Khalzev of Honduras Motorsport and his body-builder muscles bulge under his tight T-shirt as he smooths out stickers on the front. “I am from Rallyraid.net,” I said as an introduction. “I like this website.” he says with a Hollywood smile. “For Rallyraid.net I will tell you what you want to know!”

Not being the most technically minded person on the start line I suggested that he started talking me through it with the more familiar components, and so the first thing he showed me was the engine. The 3 litre KZ Land Cruiser block is positioned just behind the cab with a high pressure fuel pump to produce the maximum amount of torque. “Diesel is more efficient so we can save weight by carrying less fuel for the stages,” he said. Saving weight is one of the fundamental concepts of this vehicle. Even with its huge 39′ Bogger tyres it still only weighs an incredible 1500kg. To put that into perspective, that’s not much more than an old Fiat Panda! 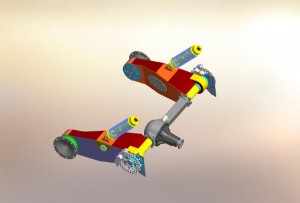 The gearbox and transfer box are also Toyota but with adapter plates and a spline shaft made by Honduras Motorsport. Drive to the wheels is moderated by sensors that ensure a perfectly smooth start so that the jerky movements of the tyres, which can cut through the sensitive surface of a bog, can be eliminated. Like I said, no expense spared.

The original Frog design was undoubtedly genius but the two separate hydraulic steering systems needed to turn the unconnected front wheels (one ram on one side would push a wheel out while the other pulled) proved to be too weak for some of the unbelievably extreme routes that constitute the Russian off-road championship. The solution was to fabricate a bespoke double wishbone set-up attached to the space-frame chassis with pivoting mounts. The front diff is made up of Volvo 303 parts in a self-made casing and their own difflocking system. The ends of the driveshafts are fitted with Toyota CV joints and lead into specially designed portals that do away with the traditional heavy cogs and use short chains instead. So, unlike its famous predecessor only the Beaver’s rear wheels are chain driven, but that otherwise astounding fact seems somehow lost in all the other stunning details that this beast is made up of. Suspension is provided by specially designed Donnere shocks, the cost of which would probably cover the entire build of some other vehicles parked near by, but ‘best money can buy’ describes many things on this vehicle. 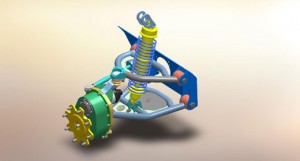 Sergei spoke with a smile, but one noticeably bereft of any self-satisfied smugness and described how the space-frame chassis was designed using a specialist computer program and was constructed with specially commissioned seamless, thin-walled tubing in the Honduras workshop using a 13 tonne press. The upper body panels are carbon fibre and the lower ones under the water line are carbon-Kevlar… and then he said something that caught me out and made me think that my Russian was failing me. I was sure he’d just said that it floats. “There are two yacht bilge pumps,” he said “They pump out the water that gets in through the winch cable aperture and through the gaps in any damaged panels. And at the back,” he said pointing to a propeller mounted about where the diff would be if there was a back axle. “There is a water canon that pushes us forwards at 5km an hour.” Then he drew my attention to the flat nose on the front and the small hydraulic rams attached from it to the cab. It wasn’t, as I thought, some ingenious device designed to lift the front wheels out of the morass if it was stuck in a bog,  but actually a rake to stop the waves destabilising it when it’s floating. Incredible. “This is why my co-driver sits behind me. Think about a small boat, how do the two guys sit? Not side by side, but like this. It’s to do with the complicated principles of displacement and why we even cut the tyres to think about saving weight, like the Hi-lift jack, some large components like shafts, bolts and rings are made of titanium.”

It wasn’t the other people from other magazines wanting interviews or photos that ended our conversation, but the call to the start podium. Once I’d stayed to see the whole 200 car field pass under the giant Ladoga balloon I prized myself into the back of the very kind Michael Lastoshkin’s Land Rover and drove to the first stage where I stood expectantly in the bog, shuffling along every now and again when I started to sink too deeply. Eventual winner Kari Sihvonen eased through in his nice Land Rover and the anti-thesis of the Beaver, the huge 3 ton Laplander, blasted through like a distressed hippopotamus… but there was no Khalzev. I guessed that he’d been so blindingly quick I’d missed him, but as I trudged back to the start I saw a very sad sight. Just 50 meters into the 1200km event, wedged between two trees, it’s front wheels pointing in different directions, sat the stranded Beaver. “I will never again use ANY Russian metal in my creations!” he growled, showing me a sheared track rod end. It was a simple thing but because it had been specially machined in-house there was no way to get a spare.

It wasn’t the end though. Despite getting a maximum penalty for the first stage and having to spend the whole event driving carefully to avoid hitting the wheels again he still managed to finish second, a position that any other team would forever consider an amazing achievement.

It won’t be seen anywhere in Europe and only a very few hardy off-roaders will ever venture out to do Ladoga and get to see it in the flesh, but thanks to Sergei being a fan of XXXX, when you see it on the official video you won’t be watching in utter astonishment and incomprehension 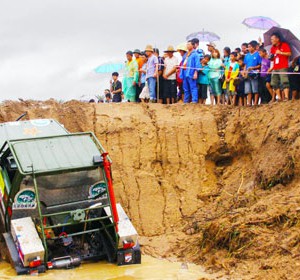 As far as history, prestige and extreme off-roading go there is one event among all others that stands out from the rest,...
Copyright 2011-2016 Rallyraid.net - RISE Network. All Right Reserved.
Back to top