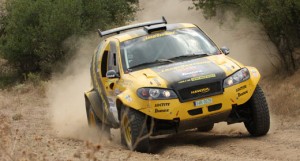 Balkan Offroad Marathon is not the easiest of the European rallies, both the distance and the terrain are really demanding for the competitors. The eight day long rally with a total distance of 1114 km, run  in two countries (Bulgaria and Greece) put to a test also Sólyom Team’s crew.

The untouched and wild Bulgarian mountains brought the team members to a special mood, so the difficulties of the rally didn’t affect the racing crew so much and the kindness surrounding the team expressly inspired them.

Olivér Sólyom: “This year’s Balkan Offroad Marathonwas a familiar event with a friendly atmosphere. It was fantastic to see how many people support us! The organisers visited us in the service park several times daily asking if we need anything. I say thanks for this experience to Todor Hristov, Meletis Stamatis and all the guys I can’t name one by one. I have to mention one more person who helped us a lot, if not with anything else then with his presence. Sir Georgi Alamurov eased even our biggest desperation in a minute and with this made the “trasse” unique for us! I know that from Hungary also  a lot of people followed the performance of the team and the support from the Hungarian drivers was touching.”

The mechanics always had something to do because HAWKIA became worn out day by day. Except for the engine and the bodywork everything had to be changed at least one time. Half-axles became “grinded”, differentials broke down, bearings crumbled, gearboxes broke. It happened that at the beginning of a 110 km special the brake calliper broke off completely and after that there was no way to brake. As for tyres the rocks “consumed” only two, but not in the form of a puncture but biting a half palmful out of their side. Olivér Sólyom and Mátyás Galbács crossed the finish line at the end of the tiring Balkan Offroad Marathon in seventh position.

Mátyás Galbács: “I really liked the site of the prologue, it was run on varied terrain and in spectator friendly circumstances and the HAWKIA jumped over the hills in a really nice way. The rally was tough, tiring and long, diverse, never boring – especially not when we got lost either on our own or with seven other cars… The navigation was very difficult, due to the characteristics of the terrain, at a higher speed it was sometimes almost impossible to notice a mark. At the Balkan Cup each race brings a new experience. The Bulgarian parts are wilder, rockier, twistier, the Greek roads are wider and faster with tricky U-turns. Respect to ‘Small’ and ‘Tall’ for the all night long “adventure repair” in Orestiada: that night they slept only one hour but by the morning we got a new car from them. It’s a strange coincidence that both Csabi Bélteky and Olivér celebrated their birthday at this rally – at those nights we were able to experience how strong international friendships can be.” 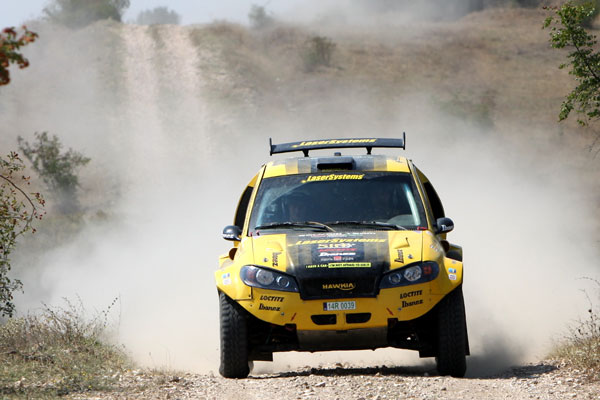 As it could have been expected, this was Sólyom Team’s most difficult rally so far in this season, but the last round of the Balkan Rally Raid Cup is still to be run: at the Athens 24 hours race in November 900 km will have to be covered in one whole day against the clock.

Olivér Sólyom: “I can’t find a better attribute for the Bulgarian rally but “raw”! Raw in its best possible meaning, in all elements, the landscape, the tracks as a whole and certain parts, the corners, the slopes and the lots of stones and rocks. I can recommend it to all those who want to take part in a real cross-country rally event, this rally really shows what are you made of. Unfortunately the HAWKIA really suffered a lot during this event, all parts of it have to be repaired but I would never miss the Athens 24 hours race!”

With its seventh place achieved at the Balkan Offroad Marathon Sólyom Team climbed up to the second position of the championship together with two other teams.

Standings of the 2011 Balkan Rally Raid Cup in category T1: 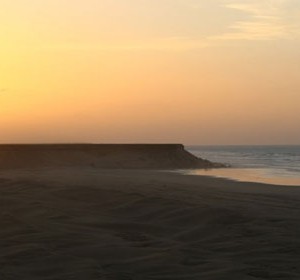 The AFRICA ECO RACE 2012 will have a rest day in the south of Morocco, not far from Daklha and just a few km from the Tropic...
Copyright 2011-2016 Rallyraid.net - RISE Network. All Right Reserved.
Back to top