Australasian Safari: “A day like it should be” – great 4th stage on Tuesday. 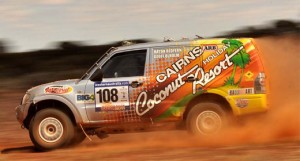 The fourth stage on Tuesday was the longest distance travelled for Australasian Safari competitors as they raced in three stages totalling 662 competitive kilometers overall and 459 kms in a looped course around Laverton in Western Australia’s northern goldfields on the edge of the Great Northern Desert.

The day began near to the City Laverton, one of the most eastern cities in Western Australia. The first stage was rocky, tricky and full of curves, passing a old goldmine. Later the stage goes on to the Victoria Desert, no trees and bushes anymore, but lots of sand and some small, easy to handle sanddunes. “It was nice” reported Italian´s Husaberg Factory driver Manuel Lucchese, “different landscape, some sand, a little piece of Africa.”

Also Annie Seel from Sweden, yesterday unhappy with the stage, arrived with a big smile in her beautiful Scandinavian face. “A day like it should be here, I´m happy about this day, it was again fast, but not only on fence-lines. You have to navigate, then some rocky regions, then the sand. I enjoyed it.”

In the cars, it was a strong day for Lowndes and Panozzo in the Holden Colorado, winning each of the three stages again and increasing their lead time over Riley and Doble to 19 minutes overall. “I had a good day. The first stage was challenging navigationally and a bit rough, but not as rough as Leg 1. The second stage was good, nice sandy tracks that opened up and were fast. There were some rutted out areas from all the recent rains, which created some obstacles” he said.

Steve Riley was following the Factory-car with his private Mitsubishi Pajero only with some minutes, they are still going strong in second position. “We had a good day. It rained on the last stage – bucketed down actually. I don’t think we made up any time on Craig (Lowndes) today but we are going as quick as we can. We are really enjoying the Safari and loving the scenery. We saw a wallaby, a pack of wild horses, and heaps of Sturt Desert Peas today.” 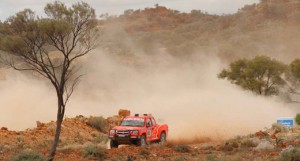 The Team AAAC Racing team of Adrian Dilallo and Rob Masi, best car in the production class with a Mitsubishi Pajero Evolution, had a good day placing third fastest in the first and last stage and retaining fifth overall position. “We went really well today, it was great, my favourite day. The stages were fast and flowing desert tracks, which I loved. We could throw the car around a bit and push hard – it was great fun.”

The only foreigners team, Rachan Trairat from Thailand and Harry Suzuki from Japan, climbed the 8th position overall with their production Isuzu D-Max car. “Today we had a good ride” Harry Suzuki told, “Rachan learned more and more about the navigation. We didn´t follow a creek anymore, we only followed the stage” he laughed. The communication in the car is a little bit complicated: “So you speak English in the car?” .. “No.”… “So what language?” … “Mostly Thai”… “So you can speak Thai language?”…”No”… now you have an idea, how the communication works…

In the bikes, today’s was South Australian Shane Diener’s day, winning all three stages on his Yamaha WR450. Jacob Smith and Todd Smith swapped second place in the stages, with Jacob second fastest in two of the three. Todd Smith is still in the overall moto lead by approximately 10 minutes.

“Today was pretty fast and the navigation wasn’t too tricky. We caught a bit of rain, there were pools of water on the track but this didn’t cause any problems. The bike is going well which helps” Diener said.

The Smith brothers from country New South Wales both enjoyed the sandy tracks and fast pace and are enjoying both being on the same team this year. “Today was fun, I enjoyed it,” Todd said. “I like going fast. The only downside is it’s hard to increase lead-time when the navigation is easier. I’m happy to have a bit of a gap now that we’re over half way so I can ease off a bit.”

Jacob also had a good day. “It was a bit tricky at the start, but after that the navigation was straight forward. “It’s heaps better this year being in the same team as my brother Todd as we can help each other out. Todd is in the hot seat and the race is really his to lose now,” he said.

Rod Faggotter is managing to hold onto fourth fastest position despite having a broken hand sustained in Leg 2. Dakar champion and first-time Safari entrant Cyril Despres is holding onto fifth position overall and is still getting on top of a different style of racing.

“This is not the race I was expecting and I am taking it like a training day – not pushing to ride as fast as possible. I enjoyed the sandy tracks and was able to test the bike a bit,” Despres said.

In the Quads, John Maragozidis owned the Quad leg today on his MMR Interceptor winning all three stages after race leader Colin Lawson struck mechanical issues on the second stage today and was not able to complete the Leg, a devastating blow after gaining a strong lead on the first three Legs of Safari.

“Today was God’s gift to quads! We had fantastic conditions and awesome tracks. I made a small navigational error that only cost a couple of minutes. I need to keep having days like today,” he said. 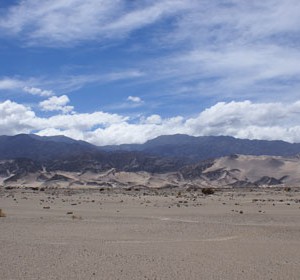 After planning out the route, preparation for Dakar 2012 is continuing with the compilation of the road-book, the competitors’...
Copyright 2011-2016 Rallyraid.net - RISE Network. All Right Reserved.
Back to top