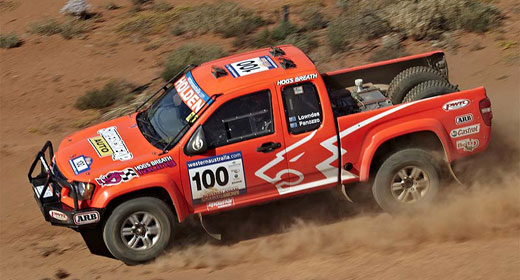 Stage 2 of the Australasian Safari Rally brought the competitors from Mount Magnet to Sandstone – normally only 150 kilometers on the road, but for the participants the day was again tough – they had to drive 326 kilometers in racing. The terrain was easier to drive, fast sandpists, but in some parts tricky navigation. So it was the day of the navigators…

In the cars, only four cars ran really against eachother, after them the time was running and running – so much, that even our press crew were not able to catch more the four cars all the day. Interesting: All cars were fitted with V8-engines from American Motor companies, even if they are running with Japanese Mitsubishi or Nissan cars.

But: From the only 16 cars five didn´t made it after the second day. Tony and Greg Flood in their ’91 Pajero, out due to mechanical issues faced in the Prologue. Tony Quinn and Toni Feaver whose “Safari hoodoo” continues, they blew engine during Leg 1. Darren Green and Wayne Smith withdrew from the race after rolling their Nissan Patrol and blowing the engine – and the Weels-Holden crashed two times in two stages.

Let´s say it so: There are two competitions. The “crazy guys” with V8-fitted engines and big mechanical support – and the “normal guys” with normal rallycars or even lower support. The crazy fraction has to make “full throttle” to be in the top – as a Normal the target means: “Keep on going, watch the navigation… and count with the mistakes of the Crazy.”

One of the “real crazys” were the father-son duo Weel, which rolled their Holden Colorado in the first day and crashed again in the second day – so heavily, that they can´t start again on Sunday. So now the team concentrates for Craig Lowndes, the second Holden was too much damaged, the penalties too high to start again.

So let´s have a view to the “crazy” but “can finish” competitors. Superstar Craig Lowndes again showed, why he is a superstar here in Australia. He pushed his Holden Colorado on top Speed, no big mistakes, great navigator, again the stagewin and he strenghten his overall lead. But today Geoff Oholm in his V8-Mitsubishi Pajero pushed, took many minutes to his teammates Riley / Doble and made the third today behind them. In the overall he climbed from sixth to fourth position.

“The stages were fast and flowing and a bit rough in a few patches and we had a close call with three kangaroos” Geoff Oholm told. “We hit 200 km/h on the fast straight track, it was very enjoyable.”

The father-daughter pairing in their V8 Nissan Patrol Pickup pushed again, stayed inside the “four Crazys” and finished in the third position overall. So, even if Laundes has a repectable lead, he can´t slower down, because his concorrents are still behind him…

Steve Riley (2nd, Mitsubishi Pajero) said, although the day was hard on the car and their bodies, it was a good day because they had no mechanical problems. “There were lots of fast bits, and some pretty rough and broken country. We caught up to Craig – he was lost, and we were lost, and a few other cars joined us, driving around in circles playing follow the leader. The scenery was nice with some big rocky gorges and acres of wildflowers. We went through some really overgrown areas and the windows got covered in sap and John (Doble) was busy scrubbing it off” he said.

Behind the leaders, only the Mitsubishi L200/Triton crew of Purshouse / McShane could follow the “crazys” nearly in time, but made a good race and finished 5th overall. The only international crew, Trairat / Suzuki in their Isuzu D-Max from Thailand, had a stable race, but some navigation mistakes. “My driver wanted to follow a wadi instead of the street” laughed navigator Harry Suzuki, “but the car made all, rocks, stones, pists. We only cannot reach the speed of the top crews, so we try to make this race with the stability of the car.”

Terry ‘Tangles’ and Jodi Conner had a rough ride yesterday having only two-wheel drive for half of the leg and Tangles said he was feeling pretty sore today. Rob Herridge and Tim Batten’s Subaru Forester suffered from some rear suspension problems but they are still in the race. 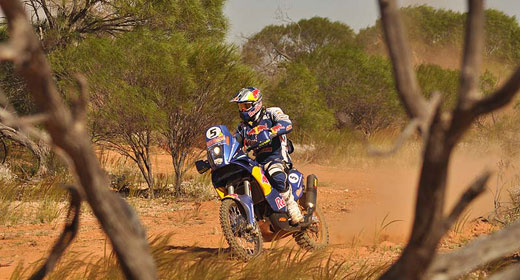 In the motos, the lead has been held by brothers Todd and Jake Smith on Honda, closely followed by Ben Grabham and Matt Fish, both on KTM. Dakar winner Frenchman Cyril Despres, also on KTM, said he had a better day and moved up one position to fifth.

“It was fun today. I was a bit faster, although I was expecting it to be like yesterday. There was some sliding – it was quite fun. Some parts were really fast. I’m still having difficultly with the course notes, it is very different to what I am used to and I’m not sure I can learn it in a week. I saw some big animals today including 1.5 metre lizard!”

Todd and Jacob Smith have stayed neck and neck but are helping each other along the way. “Jacob caught me and we raced each other most of the way, and we also worked together to open and close gates. The stages were flowing nicely – it was fun,” Todd Smith said.

Matthew Fish also encountered some wildlife on the course. “I had a good day today – no dramas. Stage 3 was really fun and Stage 4 was a bit rockier. I managed to get some good speed and didn’t make any navigation errors.  I had a couple of close calls with a kangaroo and an emu and saw heaps of lizards out there.”

For Damian Grabham, it was a relief to get to the end of today’s Leg. “Today was mentally challenging – this is the place where I broke my leg two years ago. I just cruised and took it easy. It was good,” he said.

Colin Lawson remains fastest Quad despite having a tough day, wrecking a rear wheel rim and having to stop to change his drive belt. Adrian Hermsen said he had his best day for a long time on the Can-Am Renegade. He sits second fastest in the Quads. “I had an awesome day. The tracks were fast and flowing with lots of nice corners where I could slide the back out. Today was the best ride I’ve had in ages.”

Tomorrow sees competitors travel to Laverton for the event’s longest competitive course so far at 560 kilometers. 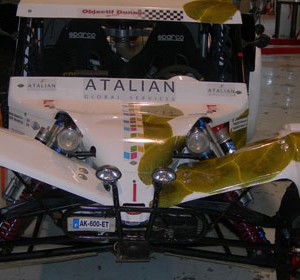 The French team Objetif Dunes comes to Pharaons 2011 to test a new generation material for car conception. From October 1st to the 8th,...
Copyright 2011-2016 Rallyraid.net - RISE Network. All Right Reserved.
Back to top