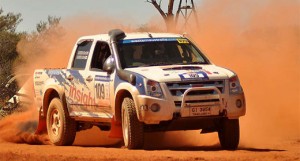 The “Australasian Safari” lived up to its reputation as the Asia Pacific’s toughest motorsport event today for its 50 remaining competitors. Maybe too tough for the French Dakar-winner Cyril Despres. After he had problems with the english language in one day, the tough stages itself in another day, then a uncorrect roadbook a third day – he retired from the race, after he was injuring his foot on Thursday – officially. So he and his managers interest was only to catch the next plane to Paris – not easy, if you are in the Australian Outback…

“It´s interesting, we have here so many drivers who fight for the win, they are driving with injured shoulders, hands, feet etc. only the officially toughest guy retires after he hurts a little” journalists laughed. “It´s not a good day for Despres, it´s not a good day for KTM.” Since the first days there were bets “what will Despres do, if he will be beaten by younger drivers in Australia?” Now we have the answer. That´s also motorsport. Some doing it for the sport, some only for money – and they are even not tough enough to loose, even if he had the chance to catch the podium – he was 4th… 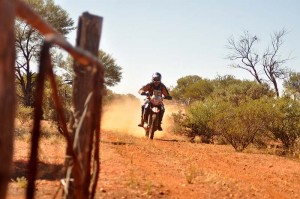 But now to the real tough sportsmen. Motobiker Shane Diener continued his strong form winning both stages today but is sixth overall following a mechanical failure yesterday. Sticking with his game plan is moto leader Todd Smith who has continued to hold a strong lead since the end of Leg 1, now 13 minutes ahead.

Both Todd Smith and brother Jacob are riding steadily and both said they were avoiding risks. Todd said today was hard. “It was a tough day. The track was tight and overgrown, it was rocky and on some parts there was no track to follow. It’s better for me to go fast, because if I go slow my concentration lapses. All I have to do tomorrow is look after the bike and see it home,” he said.

Jacob is ahead by almost 40 minutes to nearest rival Rod Faggotter, who has held on despite riding with a broken hand. “Navigation was tough today. It’s hard to stay focused this close to the end. I decided to go easy on the first stage today. There’s no point pushing, I have a big lead over Rod so I’m not going to take risks.”

Ben Williams, a privateer rider – meaning he services the bike himself without the help of mechanics – is performing exceptionally well in his first Safari, placing fifth fastest.

“Today was the sort of track I’m used to. I’ve not had any dramas being a mechanic and a rider, no problems at all. Each night my girlfriend and I work on the bike until about 10pm. Tuesday night we were up until 11pm but we rebuilt the whole bike. That was pretty tough to do with one hand – I broke my left pinky when a stick got behind the hand guard – I didn’t come off, I kept riding. It really hurt!”

Sweden’s Annie Seel who is Safari’s only female moto competitor is the leading international entrant. She said it had been a long week. “This morning and yesterday also I was in cruise mode, which isn’t too good. I let a couple of guys pass me and then I switched on and started to push. Today we had very good stages. I broke my thumb two years ago and it’s sore again now, and of course I’m tired! I was thinking about it, and it really is a tough seven days,” she said. 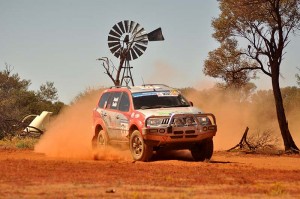 Craig Lowndes and John Panozzo won both stages in the autos but are placed down the field after yesterday’s tumble, which resulted in a ten-hour penalty. “We went really well today, the navigation was challenging and the car’s going well after last night’s repairs,” Lowndes said.

Steve Riley and John Doble are now the likely contenders for the trophy, leading the autos by just shy of two hours. “It was a bloody hard day today, rough from the word go and I was over it,” Riley said. “I just tried to conserve everything, it didn’t matter how slow we went, we still got big hits. The roof air vent got ripped off so it got really hot in the car – not comfortable. The race is mine to lose, we just want to get the car and ourselves home in one piece.” 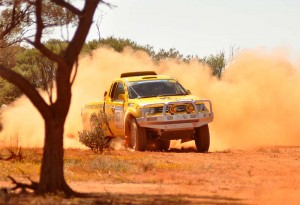 John Pursehouse and David McShane have moved into second position after a strong day in their Mitsubishi Triton. Terry Conner and Jodi Conner have lost their second position placing due to mechanical failure in the first stage today. “We hit a stump and bent the diff. We managed to get it back in but I’m not sure whether we’ll get it fixed for tomorrow,” Terry Conner said. “I’ve got away with it thousands of times but this time it got us.”

This moves WA pair Adrian Dilallo and Rob Masi in their Mitsubishi Evo Pajero to third at the end of today.

In the Quads, Colin Lawson won both stages, an impressive 15 minutes ahead of leader John Maragozidis who has an overall four-hour lead. Maragozidis said the track today was brutal. “It was a game of survival and pick your way through. I had three flat tyres to deal with in the first and my exhaust broke off in the second,” he said. “The track opened up after the midday service, and I really enjoyed it.” 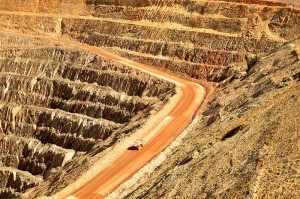 Today’s course west of Leonora took competitors in and around old mine sites and salt lakes and areas damaged by water erosion for 377 competitive kilometres. Some of the tracks had not been used for several years along with rough, rocky and overgrown sections and finishing in deep sand and a final fast section.

Tomorrow is the final leg of Australasian Safari, taking off from Leonora to Kalgoorlie and finishing with the final section at the new Kalgoorlie Golf Course and the finish line. There is a spectator point at the golf course and the public are invited to come along and watch the action and the official podium finish. 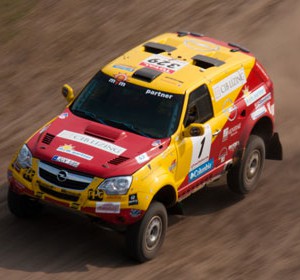 In the middle of October Baja Slovakia ®, the only Slovak cross country rally, will return after one year pause. For the first...
Copyright 2011-2016 Rallyraid.net - RISE Network. All Right Reserved.
Back to top