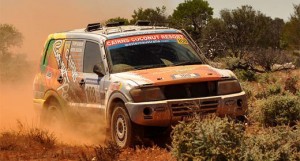 “Welcome in the Outback” showed a sign some kilometers before the “Village” of Yalgoo, where the Servicepoint after the first stage of 183 kilometers in racing was settled.

And yes, we are in the Outback. Not the real desert like in Africa, but hot, stony regions with many small bushes and trees – and partly greenfields with thousands of little yellow and red flowers. This was like a carpet for the participants – soft, but extremely slippery. Also the temperatures changed from coastal 24 degrees up to 36 in the Outback.

The Mitsubishi Pajero V8-Crew (yes, V8) Steve Riley and John Doble were leading the first stage on Saturday, but had major brake issues in the second part of the day about 230 kilometers. So it was the day of the Australian “Michael Schumacher” Craig Lowndes, who overtook six cars (!) and made the first stagewin in 04:43:22 hours with his shining Holden Colorado V8 Pickup. But Riley and Doble secured the second position with 04:50:07. 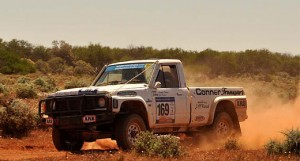 Steve Riley elaborated: “Our brakes exploded just 20 kilometers from the end of the second stage. We had been first out and were leading up until that point but had to stop and fix it up. But the wildflowers out there were beautiful but dangerous – it was like driving on oil and we did a lot of damage to the car.”

The Connor team also had no “easy going”. The stabilizer of their Nissan Prototype with Chevrolet 4.7 litres V8 engine broke some kilometers after the start, “we were just slipped through the stage, hitted a tree with our back, but nothing serious” Terry Connor said in the evening.

Damage was a common theme amongst the cars and the PWR Holden Rally team mechanics will also be putting in a late night with Lowndes and Weel both hitting trees. Lowndes explained: “We navigated our way into the forestry and had to then turn the car around in the first stage. It was really rocky and rutted and we did a lot of sliding in the wildflower areas.”

The second Holden Colorado of the father-son pairing Paul and Kees Weel, winner of the prologue even after they roll, had more serious problems. They arrived very late in the Camp – again with a destroyed Holden Pickup. They hit a tree on the drivers site heavily, broke the tire and damaged the cooler system. The mechanics have to find out, if the car can be fixed – there´s a lot “cold formed” metal to reconstruct.

At all, many cars were missing in the evening, had technical or navigation problems or damaged their car, so the results will take a while. Tony Flood and Greg Flood in their Mitsubishi Pajero were the first who had to retire from the race. They did not start in the stage due to mechanical issues. Tony Quinn and Toni Feaver (Mitsubishi Pajero) were towed from the first stage.

In the bikes, Brothers Todd and Jacob Smith finished first and second fastest with two minutes between them, followed by Rod Faggotter and then Ben Grabham, who recovered after a tumble over the handlebars.

Cyril Despres is sitting a respectable sixth fastest despite continuing difficulties with the language of the road books. “This is quite a different race for me and reading the navigation is like a different language. I was not racing at 100 percent capacity today and it’s also the first day.”

Jacob and Todd had some friendly rivalry keeping each other at pace despite the overgrown tracks, which they both said were treacherous.

Last year´s winner Ben Grabham (KTM) said he was a bit sore but a Panadol at the refuel kept him going. “Something happened when I was in first gear going through the grass. I wasn’t liking the conditions today, you couldn’t see anything in the long grass.”

Shane Diener finished a respectable seventh after coming off on a corner and getting lost a couple of times in the first stage. “I sorted out my concentration by the second stage and am being a bit more cautious after breaking both my wrists earlier this year.” 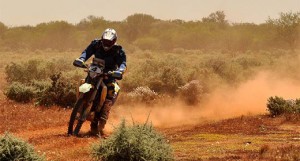 Young English rider Sam Sunderland had another rough day in the Aussie outback, hitting a kangaroo and coming off his bike. He managed to get back on to reach the end of the stage but arrived disoriented and was seen by a medical team and given IV fluid. He hopes to start tomorrow.

Italian rider Manuel Lucchese had wheel damage 108 km into the second stage. “My mousse in the tire exploded, really, with fire and a heavy damage. So I can´t finish the stage, which is very sad. I wanted to get a good position, but this dream is over now. Ok, I can start again, but it´s not the same fun as before.”

It was a tough day for the Quads as well. The kinship of the quad riders was apparent when Heath Young towed Neville Yeatman from the first stage. Colin Lawson, finishing fastest for the leg, said he lost a lot of time as he blew a drive belt in the first 70km after he pushed hard to catch the lead rider. Paul Smith did not finish the second stage because of fuel problems. 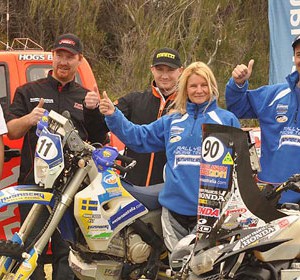 As in the previous year, the "Safari Headquarters" are beautifully situated directly on the beach of the Perth-suburb "Joondalup"....
Copyright 2011-2016 Rallyraid.net - RISE Network. All Right Reserved.
Back to top